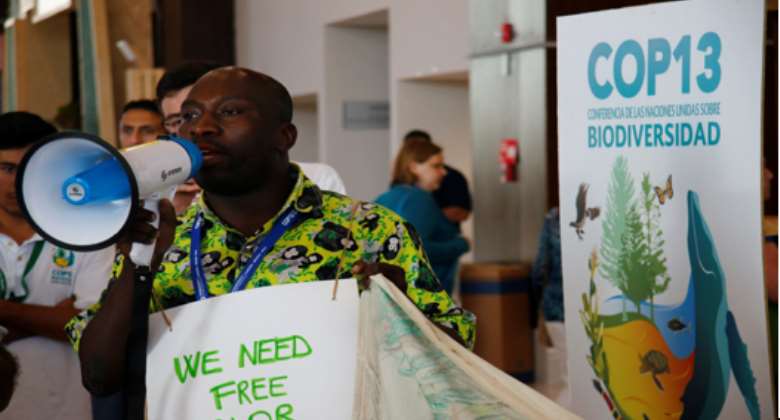 Cancun, Mexico: Environmental activists from the African continent who are members of the Indigenous Peoples’ and Community Conserved Territories and Areas (ICCAs) says governments on the continent need to engage with indigenous people on the basis of mutual agreement as far as the use of biodiversity is concerned, particularly, traditional lands and territories.

Taking part in a demonstration at the ongoing UN Biodiversity Conference in Cancun, Mexico, the environmental activists, also indigenes in their respective countries, charged African governments to involve communities who are custodians of traditional lands and territories in decision making process on the uses of natural resources to achieve biodiversity and conservation.

“If indigenous communities are involved in the decision making process with regard to natural resources, then we will not have problems associated with biodiversity conservation, but they are not part of the process. However, they are the custodians of the lands,” says an environmental activist from Zambia, Vincent Ziba, at a demonstration initiated by the ICCAs at the UN biodiversity conference, in Cancun, Mexico.

“But if there is a mutual agreement on how the mining can be done, and communities can find alternatives within their communal rights then you can find a way forward, but this is not in the new paradigm that government uses now are pro rich and determined by multinationals and not consider local rights hence a danger,” states Vincent Ziba, an environmental activist from Zambia.

He mentions that delegates at the conference recognise community rights and territories as protected areas, but adds, “what needs to be done more is how communities can be supported, so that as much as the rights are recognised on paper, in practice governments can do more. It is because at the end of the day it's governments that do not follow these agreements and start listening to the stories of the multinationals hence the disparity”.

Dominique Bikaba, from Democratic Republic of Congo says free, prior informed consent for traditional lands is something very important to ensure that conservation and biodiversity can take strong fold in sustainable development in Africa.

Some delegates at the conference have resisted the free, prior and informed consent in the adoption of the draft voluntary guidelines for accessing traditional knowledge, innovations and practices, however, the African group is gradually pushing for that to be included in the final guidelines.

“Hundred years ago, people having been coming on our lands-protected areas, and that has been pushing people out of our lands, the state of biodiversity on those lands is nothing to write home about.

“There is drastic decline of wildlife population, and deforestation is on the rise. It is difficult for governments to do conservations without indigenous people, it's impossible.

“When they are coming on our lands, be it for protected areas creation, mining exploration, the indigenous people should have the opportunity to make a choice, that's is our life and future,” Bikaba emphasizes.