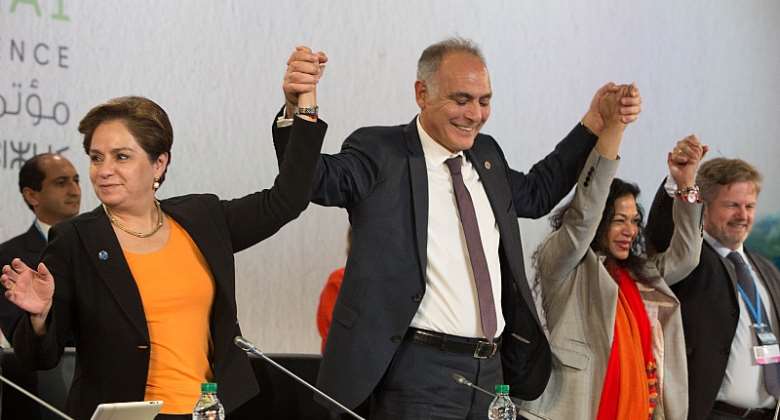 Marrakech, 18 November 2016—Countries accelerated global climate action across a broad range of areas at the 2016 UN climate change conference as they fast-tracked the political and practical aims of the historic Paris Climate Change Agreement (http://unfccc.int/paris_agreement/items/9485.php).

Multi-billion and multi-million dollar packages of support for clean technologies; building capacity to report on climate action plans, and initiatives for boosting water and food security in developing countries were also among the many new announcements and initiatives launched.

Meanwhile governments set a rapid deadline of 2018 to complete the rule book for operationalizing the Paris Agreement to ensure confidence, cooperation and its success over the years and decades to come.

For example, a club of subnational governments, the Under2 Coalition (https://www.theclimategroup.org/project/under2-coalition), who have committed to reduce their emissions by at least 80 percent by 2020, announced their membership has grown to 165.

The Climate Vulnerable Forum a group of more than 40 vulnerable nations, released a declaration that strengthens the call to limit global temperature rise to as close to 1.5 degrees Celsius as possible.

Several countries – Canada, Germany, Mexico and the United States – announced ambitious climate strategies out to 2050 (http://unfccc.int/focus/long-term_strategies/items/9971.php), reflecting the long-term goal of the Paris Agreement to achieve climate neutrality and a low-emission world in the second half of the century.

Patricia Espinosa, Executive Secretary of the UN Framework Convention on Climate Change (UNFCCC), said, “The landmark Paris Agreement set the course and the destination for global climate action. Here in Marrakesh, governments underlined that this shift is now urgent, irreversible and unstoppable”.

This new era of implementation and action for climate and for sustainable development was captured in the Marrakech Action Proclamation (http://unfccc.int/files/meetings/marrakech_nov_2016/application/pdf/marrakech_action_proclamation.pdf) .

“I would like to pay tribute to the Government of Morocco and the President of the Conference, Mr. Salaheddine Mezouar, for their remarkable success. COP 22 has been what it needed to be, a COP of action that has accelerated progress under the Paris Agreement across finance, new initiatives, ambition and solidarity between nations and across Continents,” she said.

Mr. Mezouar, President of the 22nd Conference of the Parties (COP 22), said, “The Kingdom of Morocco is fully engaged in the success of this COP and will energetically carry out its role as President. At the outcome of the last fifteen days, our vision has been consolidated and we are working to make concrete progress and to carry out breakthrough actions from now until the end of 2017”.

“It will be necessary to respect the commitment of $100 billion dollars from now until 2020. Faced with the magnitude of what is required for dealing with the impacts of climate change, turning billions into trillions is indispensable. 2017 must be the year of large scale projects, of mobilizing finance, and accessing financial facilities that will be necessary for adaptation, “he added.

Ms. Espinosa added, “During COP 22, the strength, the support for and the robustness of the Paris Agreement was furthered underlined, with nine more ratifications received at the UN in New York and the promise of many more to come. Nations reaffirmed that the agreement is in their national interests and a key catalyst to a better, more prosperous future for their citizens”.

At the close Fiji was announced as the host of the 2017 UN climate conference, with Germany assisting the Pacific island nation by holding it in Bonn.

Key Outcomes and Initiatives
Rule Book
A crucial outcome of the Marrakesh climate conference was to move forward on writing the rule book, or operational manual, of the Paris Agreement.

The agreement calls for a significant boost of transparency of action, including for measuring and accounting emissions reductions, the provision of climate finance, and technology development and transfer.

It also includes work to design the adaptation communications, which is the primary vehicle under the Paris Agreement to share individual adaptation efforts and support needs.

Countries pressed forward on this and set a fast track date of 2018 for completion. Countries have already built the foundation for this by peer assessing each other’s actions to cut emissions through a transparent process that began in 2014.

At COP 22, seven developing countries presented updates and opened themselves to examination by their peers on how they are moving to a low carbon economy.

This fits into delivering a system for monitoring, verifying and reporting actions and opens the door to greater ambition under their climate action plans, called Nationally Determined Contributions (NDCs).

NDC Partnership
Implementation of climate action plans also received a boost from the launch of the NDC Partnership (http://unfccc.int/files/meetings/marrakech_nov_2016/application/pdf/ndcpartnership_launch_release_en.pdf) – a coalition of developing and developed countries and international institutions working together to ensure countries receive the technical and financial support they need to speedily meet their climate and sustainable development goals.

Progress by Governments
Governments made progress across key areas of climate action, including climate finance, adaptation, capacity building, technology and gender-responsiveness. This is an overview:

The initiative will mobilize governments, international organizations and academia in a targeted effort to protect peatlands, which contain almost 100 times more carbon than tropical forests.

Its goal is to federate the main actors in the field of clean technologies to create synergies, give advice to governments, and promote profitable solutions to the world’s most pressing environmental and health challenges.

Further impressive announcements were made by cities and sub-national governments to investors and business as part of the Global Climate Action spearheaded by Climate ChampionsLaurence Tubiana and Hakima El Haité.

“Through our mandate as Champions, we have enhanced the participation of non-state actors, encouraging a range of initiatives, both individual and cooperative. The shift to a low-carbon future and a resilient civilization is something that is irreversible,” said Climate Champion Laurence Tubiana.

The High-Level Climate Champions launched the Marrakech Partnership for Global Climate Action (http://unfccc.int/files/paris_agreement/application/pdf/marrakech_partnership_for_global_climate_action.pdf) to provide a strong roadmap for how the UNFCCC process will catalyse and support climate action by Parties and non-Party stakeholders in the period 2017 to 2020.

Announcements linked to GCA events at COP 22 include:

The Momentum for Change Lighthouse Activities are some of the most innovative, scalable and replicable examples of what people are doing to address climate change – these events celebrated these solutions. Learn more about this year’s winning activities here: www.bit.ly/m4c-award.

About the UNFCCC
With 197 Parties, the United Nations Framework Convention on Climate Change (UNFCCC) has near universal membership and is the parent treaty of the 2015 Paris Climate Change Agreement. The main aim of the Paris Agreement is to keep a global average temperature rise this century well below 2 degrees Celsius and to drive efforts to limit the temperature increase even further to 1.5 degrees Celsius above pre-industrial levels. The UNFCCC is also the parent treaty of the 1997 Kyoto Protocol.

The ultimate objective of all agreements under the UNFCCC is to stabilize greenhouse gas concentrations in the atmosphere at a level that will prevent dangerous human interference with the climate system, in a time frame which allows ecosystems to adapt naturally and enables sustainable development.