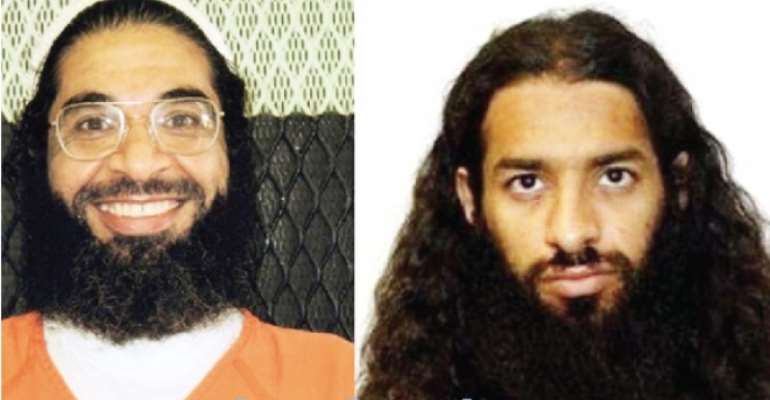 There’s a virus that is rapidly replicating into the conscience of mankind, making us less of beings of reputable rationale. This virus has the potential of altering our reason. So we carry food with unclean hands and then proper hand washing with soap and water is done after eating.

These days, trusting people to live up to expectation can be tragic, leaving you to wonder if we ourselves aren’t viruses in human forms. Unless we are not getting the drift, it is bewildering how people would entertain the belief that there are no crocodiles because the water is calm. Take for a typical example, the grant of asylum for these two Middle East detainees from the Guantanamo Bay by the Ghana government.

In reducing the number of detainees at the camp, the White House is freeing these dangerous radicals to selected countries, including Ghana; a development which has received vehement snub by the rank and file of the country. Why our government irrevocably admits these blood suckers is perhaps what Obama led them to believe that they were ‘never involved in terrorism’, in spite of the obvious fact that ‘eating with unclean hands will make you sick’.

President Mahama makes us understand one thing – that either the two terrorists were just parcelled for him, and told not to open until he arrived in Ghana or that he carried a swarm of bees, with the hope of taming them into harmless flies.

What is mind boggling is whether we should trust our President or the external people who are proving him wrong. According to US pundits, the said description as given by our leaders isn’t true for either of the men. Bin Atef in particular is a cause of concern. Long before his transfer, the intelligence analysts at Joint Task Force Guantanamo assessed him as a ‘high risk’ and ‘likely to pose a threat to the US, its interest and allies’. Atef is actually a fighter in Usama bin Laden’s former 55th Arab Brigade and an admitted member of the Taliban.

This is in sharp contrast to the claim by Mahama, who portrays the deal as an act of humanitarian assistance, likening the Yemeni men to non-threatening refugees who have been cleared of any involvement in terrorist activities. Do we need rocket science to educate the educated that even though these men have been tamed for about 14 years, their psychology concerning extremism cannot be washed?

When we say hypocrisy is in full strike in this match, what we are looking at are the assurances from the Interior Minister and Foreign Minister that they are ready to fight eternal terror attacks even though they were not privy to discussions on this chronicle and till date have no information on the said detainees. I wish I had an analogy to explain this cluelessness. It’s like…it’s very much like…

Honestly I really wish I could find a metaphor to draw similitude from.

Okay, it’s like Sheikh Osmanu Nuhu Sharubutu’s opinion on this issue – that accepting these two spells no doom for the country; he would even feed and accommodate them.

If you say ‘the Islamic religion holds the ultimate value that the human being is reformable; meaning we hate the crime associated to man but we don’t hate the man, then we must accept Boko Haram, ISIS and Al-shabab. Because it will be the height of hypocrisy to admit two of the world most dangerous terrorists who are radicalised and trained fighters of these terrorist groups, and condemn the various groups they inspired. Why don’t we throw an open invitation to all of them to come live in Ghana? Then we know you are being fair.

The state didn’t need to make this their business. If only they opened discussion on it, Chief Imam would have had the highest bid. He was willing to host, feed and clothe them without anyone paying a dime.

It is obvious how much oblivious the Chief Imam is to what the issues are. So just like him, two ministers and other communicators of the ruling party, may eat with dirty hands because they have no knowledge of typhoid fever.

One moment, the Foreign Minister has no idea about this development and the next moment, she wakes up, promising to fight consequent terror threats. When Hanna Tetteh confidently says she’s ready to match foreign terror attack boot-for-boot it again comes to us as a matter of two-facedness that her outfit couldn’t lay hands on the necessary documents to make impact assessment of those GITMO detainees. How then can we counter-attack a well calculated war? How?

Point is we can’t trust a country that is already under the threat of uncontrolled Fulani herdsmen who make free passes and cause a lot of havoc without control. It has become clear how the government has not any concrete plan in dealing with these extremists. This is a nation where armed robbers enjoy jolly rides in town until it takes the bravado of taxi drivers to knock them off. We can’t fight inanimate fanatics like corruption yet the minister is beating her chest in valour. We do not have any sophisticated means to handle crime and terrorism, yet we pride ourselves to hold up high-risk militants who continue to demonstrate their support for extremism. Such double standards!

Here’s a country that was once the star of Africa, but now turned garbage to the world. Our glory keeps weaning due to the cheap political points our leaders seek to score. Meanwhile it is a different story elsewhere.

You see, the difference between Obama and Mahama isn’t in the alphabetic permutation of their names, but rather the charge kept by each of them. One of them is fulfilling his campaign promises to his people whiles the other is fulfilling his ego, to the detriment of the masses.

One of them, fuelled by cruelty locks up innocent beings and then releases them to disadvantaged countries while the other is too compassionate to see them undergo such unfair, slanderous maltreatment. ‘I am a Christian and so I show compassion’ is what one says.

But unknowingly the latter fails to note that not everyone is a Christian in his country of service and that the Holy Bible is not used in governing a nation. He fails to know that in thinking like the Chief Imam such a philosophy will mean putting to every day-use the Presidential prerogative power of mercy for all prisoners in custody. It will mean letting one the prison gates open, so that convicts will only make a pass-through. Such a president may have an impaired judgement on officials who are caught corrupt, just saying.

The use of compassion to lead 27 million people could spell doom, because the Commander-In-Chief of the armed forces would be like an emotional boyfriend who’s blinded by love. That is why we all agreed that since Ghana is a secular state, we rule with the letter and spirit of a constitution. The constitution didn’t talk about compassion when the anti-terrorism act was passed. The constitution has clear guidelines which include using the appropriate channels in making negotiations as sensitive as this one at hand.

How come the Parliamentary Select Committee on Defence and Interior, The Attorney General , the Interior Ministry, the Foreign Ministry were kept in the dark about this has been explicated by Hannah Tetteh that in executive Presidency the leaders are not obliged to consult the masses and are compelled by those tenets to act arbitrarily.

So in ruling out another instance of a ‘double-standardness’ we took a look at the exporters of these terrorists; the USA who also practise a similar system. Yet Barack Obama was not caught flat-footed. He respects the ruling of Senate that these detainees be kept outside America, a decision that debars him from admitting them. But down here in Ghana, even when there is a clear Anti-Terrorism Act that suspected terrorists cannot be admitted, a certain president uses veto power to decide otherwise.

Or maybe we could cut some slack for the President and allow some zoom and fine focus into his ‘compassion’ statement. We should try to make a better understanding of what he meant. But then again, anything we do isn’t helping the matter. This is what we see.

We find a scene of a suicide bomber hurting himself in defence of his beliefs. Something like, having compassion yet scraping off the allowance of training nurses and teachers; increasing fuel prices no matter how much workers agitate, crushing the national health insurance scheme to leave the poor sick dying, shooting fuel prices through the roof and denying the primary school children the bowl of rice even as they spent the whole academic year under trees. Yes, we saw compassion, empathy and sympathy in the eyes of the first gentleman in his bid to put smiles on the faces of Mahmoud Omar Bin Atef and Khalid Mohammed Salih al Dhuby. He forgot briefly about his 27 million wives and went after the two concubines. Such compassion! Such love!

But trust me, the President ‘will not take any decision that will jeopardize the security of this country. ‘The two played no operational roles in Afghanistan’ and that they pose no threat to Ghana’s national security. These are unjustly kidnapped detainees who are illegally detained for 14 years without trial. They are humans too and deserve some level of care to rebuild their lives. Ghanaians should be hospitable and friendly whiles they are prepared to find peace with the families.

Point is, the whole GITMO brouhaha is not only ill-informed but also a total disregard for the structures of good governance. Telling your doctor you aren’t ill and denying symptoms even though you look pale is itself a sign that your condition has worsened.