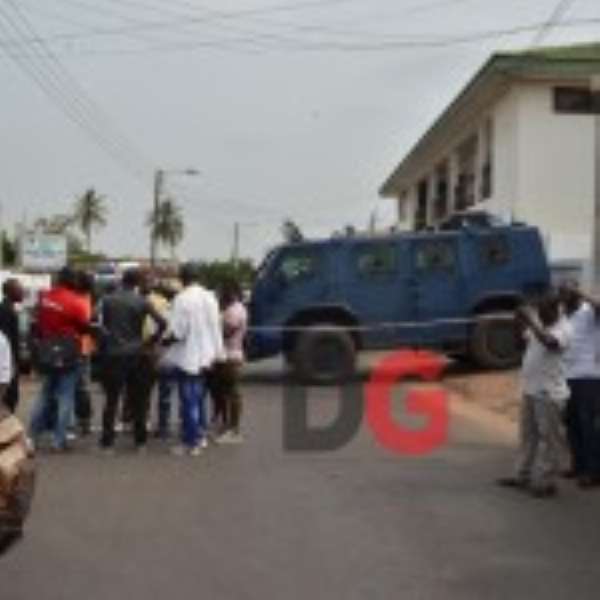 The struggle for political power takes place and revolves around groups of like-minded people (political parties) who implement strategies and tactical actions for that purpose. Political parties in pursuance of this legitimate cause, marshal resources and their energies directed at this goal of winning power to manage the resources of the nation-state for the good of all. However, this otherwise legitimate mandate sometimes turns more aggressive and intricate in both intra and inter party rivalry.

The Watergate scandal that occurred during the 1972 campaign to re-elect President Richard M. Nixon of US symbolically manifests the extent to which political parties can go, not only to win power, but to subvert the democratic will and order of the people through illegitimate actions. Watergate was synonymous with scandal such that all scandals had “gate” tacked on them, hence Asylumdowngate Scandal at the NPP Headquarters. There are remarkable similarities between the two events that occurred at different time and space, though with some few variations. The focus of this paper is to juxtapose the two and highlight the extent to which the Watergate scandal had been thrown back in Asylumdowngate scandal and political lessons that could be learned thereof.

Watergate scandal was the single greatest scandal that rocked the US that resulted in the only resignation of a US president in the nation's history. The scandal is the arrest of five burglars at the headquarters of the Democratic National Committee (DNC) in the Watergate office-apartment-hotel building in Washington D.C. on June 17, 1972 under the cover of darkness. Four of the apprehended burglars were former operatives of the of the CIA and the fifth, James W. McCord,Jr., was the security chief of the Committee to Re-elect President Nixon(later known as CREEP). CREEP was headed by Nixon's former attorney general. Though the burglars targeted DNC offices at Miami as well as the office of the Presidential nominee, the priority target was Watergate offices especially the office of the Chairman, Lawrence E. Obrien. The burglars stole copies of top-secret documents and bugged the office's phones. In the course of the operations, a security guard at the complex (Frank Wills) noticed that the building locks had been tapped; called the police who responded quickly and caught the spies red-handed.

Asylumdowngate scandal is the attack that took place at the national headquarters of the NPP around 1.00 am on November 23, 2015. Some 15 men in military uniforms travelling in two military vehicles with police escort invaded the NPP headquarters. The prowlers who included retired soldiers were led by Bismark Osei Danso. The prowlers invaded the office and paved the way for some 50 young men in red shirts to take over the headquarters of the party after guns and new machetes were displayed. Three security men were held hostage and the doors to selected offices broken into, especially that of the Director of Electoral Affairs; ransacked and computer hard disk drives, several files, Electoral Commission correspondences and other strategic documents stolen. Another contingent of armed men and 15 young men in red T-shirts also invaded the headquarters annex at Kokomlemle. One security guard who escaped, managed to alert the Nima police of the attack and quickly came and arrested some 11 people including a lady.

One striking feature with the Watergate and Asylumdowngate scandals was the accusations of government's involvement and counter denials. The burglars of the Watergate break-in were not connected with President Nixon; however, suspicions were ripe when detectives found copies of CREEP's White House phone number among the burglars' belongings. With the Asylumdowngate break-in, the leadership of the NPP was accusing the ruling NDC government of using rogue elements within the national security set up to perpetuate that crime with the view of putting the party in bad light. The leader of the arrested gang is allegedly a staunch NDC member; the use of military uniforms, vehicles and the Sub-machine Guns (SMGs) that are only found in military or police armoury all attested to some kind of state involvement in the dawn raid at the NPP headquarters. The red shirted invading prowlers at the headquarters annex at Kokomlemle were said to have been released even though they were apprehended by the police. As people started suspecting President Nixon's White House complicity in the bizarre incidents, he vehemently denied it in a speech that White House Counsel John W. Dean had conducted complete investigations into all leads and that no White House staff was involved.

With the Asylumdowngate scandal, government has denied any involvement in the sordid act. The National Chairman of the NDC, Mr Portuphy in denying any involvement by the ruling party, posited that the NPP was disingenuously trying to shift blames to external body for its internal woes; and that NPP was dangerously disorganized and confused. Dr Omane Boamah rejected the accusation with the reason that NPP woefully failed to provide a scintilla of evidence to back its claims. Dr Percy of National Reform Party posited that the scandal was self-induced by the NPP to create a situation of insecurity and to back its demand for new voters' register.

The background to and the basis for the Watergate scandal is worth noting. The US had witnessed hostile politics in the 1960s and by 1972; the nation was deeply divided internally over the Vietnam War. Nixon's Republican Party was utterly disappointed with the 1970 Congressional elections; and coupled with aggravated massive antiwar demonstrations, Nixon feared a possible electoral defeat in the 1972 polls. This harsh political climate demanded a forceful and aggressive campaign tactics, hence the Watergate scandal that turned out to be an illegal espionage. White House Special counsel Colson developed a list of enemies and recruited undercover agents and made plans for domestic surveillance. The Asylumdowngate scandal also lay in similar circumstances. Ghana is arguably deeply divided along partisan lines such that every action and utterance is viewed through a political lens. The socio-economic conditions in the country appear not too favourable; coupled with more than three years of unreliable power supply (dumsor) and aggravated by series of demonstrations by public sector workers over unpaid salaries and allowances. At his backdrop, the NPP strongly believed the ruling NDC party masterminded the attack meant to damage the NPP and desperately hang on to power at all cost amidst poor performance.

Watergate was also associated with abuse of presidential power and deliberate obstruction of justice. This, Nixon committed   by arranging to provide hundreds of thousands of dollars in hush money to the burglars and bribing newspapers that were sympathetic to him from mentioning the scandal. Nixon was re-elected in a historic landslide, even though he was not truthful with the scandal. Likewise manner, Asylumdowngate scandal is allegedly funded with tens of millions of Ghana cedis in slush fund from the Flagstaff House.NPP asserts that this huge budget and crack team  with support from national security is meant to create confusion in NPP and damage its electoral fortunes in 2016.

A very interesting feature of the Watergate scandal is President Nixon's direct role in which together with White House Chief of Staff H.R.Halderman, a plan was hatched to have the CIA put pressure on the FBI to cease Watergate investigations on a flimsy reason that it would threaten national security secrets. However, strong institutions in US lived up to their core mandate through independent investigations and trials where Nixon was named unindicted conspirator and White House aides and other officials imprisoned. The Supreme Court forced Nixon to produce nine tapes that clearly implicated him in the cover up and the subsequent impeachment process by Congress and finally, his resignation on August 8, 1973.Nixon did not admit any wrong doing in the espionage nor did historians know whether he knew of the operation, but what is a fact was that he attempted cover up including destroying incriminating evidence and firing staff members who refused to condone the cover up.

The Asylumdowngate scandal is condemnable. Be it an intra or inter party rivalry, it is a criminal act that suppress civil liberties and wages domestic warfare against political opponents through espionage and sabotage and an attack on our transient democracy. We expect the institutions in charge of the investigations and prosecution of the case to discharge their constitutional mandate effectively. Worthy of emulation is that Nixon's attorney general and his deputy offered to resign than obey his order to fire the special prosecutor who had insisted Nixon obey the order of the US Court of Appeal to provide the tapes.

NB: The writer is a Doctoral/PhD candidate in Business Administration.