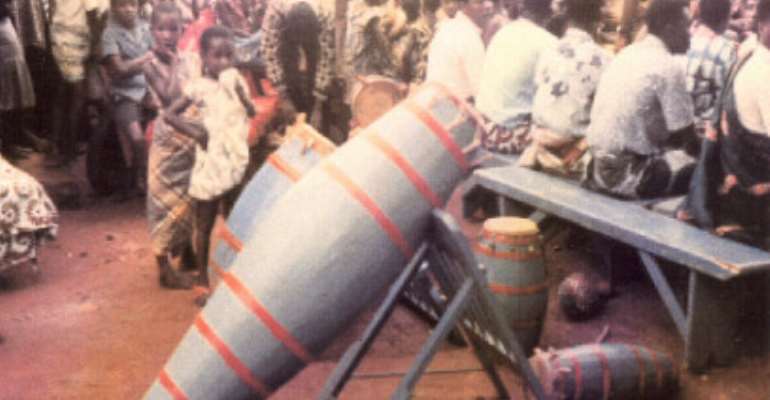 Greenotation: Manuscripts of African Music and Dance. What is Greenotation? Greenotation is an innovative system, created by a young black girl when she was in high school. This system is a system wherein music for African instruments can be written. Prior to this creation, it was impossible to write music for the percussion instruments of Africa. Africans had been trying for decades, if not centuries, to be able to write her music so it could be shared among other Africans, but they were unsuccessful, and African music remained an oral tradition that was lost each time the elders who held this knowledge in their heads passed away.

Greenotation is a record of how you play a certain tone on percussion instruments. This record allows the musicians to play a specific tone again and again, repeatedly each time the symbol is revealed. A teacher of Pitman shorthand, who remarked that any sound could be written with the Pitman shorthand system, prompted this young black girl to write drum sounds. This youngster picked up her pencil, using the symbol for the word “drum” in shorthand and wrote her first drum sounds. They were Do, Do, Do, Dum, Chak. These sounds indicated that there were three open strokes on the drum, a closed stroke, and a slap.

Throughout the decades those who followed the work of researchers in the field would become familiar with the work of Doris Green beginning with invitations from the Timi of Ede, Oba Adetoyese Laoye, I, of Nigeria who invited her to come to Nigeria and assist him in putting the IGBIN set of drums in written form. Duro Ladipo a celebrated Nigerian artists on the Talking drum of Nigeria, was stunned when she personally demonstrated to him how she wrote music for Africa’s most complex drum, Iya Ilu Dun-Dun. He invited her to return to Nigeria and personally work with him on the talking drum as well as the Bata drums. Unfortunately Nigeria underwent a period of unrest in the country that prevented the return of Ms. Green to Nigeria. During these periods of unrest, both the Timi of Ede and Duro Ladipo passed away.

This young high spirited girl, from that day in high school, knew her calling was to continue her work in the notation of African music. As a musician and dancer she devoted her time to perfecting this system for writing music for percussion instruments. The most prominent recipient of African music is African dance. In fact dance is inseparable from music in Africa. When Brooklyn College included a course in Labanotation, the system for writing dance movements, she enrolled in college to study Labanotation. She would use this knowledge to align the music of Africa with the corresponding dance movements. Combining Greenotation with Labanotation would create integrated scores of both the music and dance reflecting their inseparable existence in Africa.

Doris Green strengthened her calling through continued research throughout the continent of Africa studying with various personnel from Tanzania to Senegal. She demonstrated to these people that African music and dance could be written on paper, where it could be studied, learned and later played from a print source.

The passage of the Civil Rights Act in the United States mandated that courses on Black and Minority studies be included in the curriculum of schools throughout the nation under the threat of loss of federal funding. After graduation from Brooklyn College, she became the first person to teach African dance and music in Brooklyn College. As a lecturer in the college, she won three C.U.N.Y. (City of New York) Faculty Research awards that took her to Africa to study. Later she was the recipient of the coveted Fulbright award to teach in Ivory Coast and the Gambia. The students at L’institut National Des Arts in Ivory Coast were enthused at seeing how their music and dance appeared on paper.

Later she was a U.S. State Department, cultural specialist to Ghana where she taught students and performers how to write dance on the computer. This project is the foundation of the creation of an archive of written notated scores of African music and dance, as none exist in Ghana or in any country in Africa. Tokoe, a puberty dance of the GA people was chosen to be the first selection of this endeavor because it was performed frequently in the early seventies, but was not performed as readily today. The project was successful and several students and myself appeared on Ghana national television to inform the viewing public of efforts made to give African music and dance perpetuity. Through Greenotation, African music will join other subjects on the shelves of academia in the form of textbooks, e-books, and other audio-visual sources wherein the world can learn the richness of African music and dance.

Greenotation: Manuscripts of African music and dance is the forthcoming book that presents both African music and dance in detail. The first section of the book is devoted to African music and the instruments used in musical production. The book addresses the origin of Greenotation, and its alignment to Labanotation. The categories of African instruments are basically idiophones and membranophones, as these instruments have no representation in the realm of western music or musicology. In my early research I identified a dozen strokes and sounds used in drumming traditions. Continued research revealed more than forty sounds used in drumming. The idiophone category represents all other instruments used in African ensembles that are categorized according to how the sound is produced. They are struck, shaken, concussive, pounded, stamped, scraped, and plucked. Each of these categories has their own symbols to represent the sounds produced. There is also a chapter on hand clapping as well as melodic idiophones such as xylophones and marimbas, balafones. See how music for xylophones and balafones is written. Also see the music of music boxes. View instruents that are popular among women such as Pot drums, Adenkum, and water drurms.

The second division includes how Labanotation is applied to African movement, the integrated staff. African dance does not have a definitive position of the feet as well as porte de bras, for the arms. But African dance does have carriage of the body during movement that differs from that of western dance. This section includes sample notations of integrated scores, explanations of these dances as well as photos of instruments and a glossary of symbols. See sample notations of integrated scores of Sabar, Sindimba, Agahu, Tokoe and Lenjengo as well as others.

Finally Africa has a musical system of her own that is dictated by the needs of Africa and her percussion instruments together with the accompanying dance movements.

Greenotation: Manuscripts of African Music and Dance is the most complete text on African music and dance. It will be published shortly so be on the lookout for it.

Akuapem Poloo conviction should serve as a deterrent to nude...
28 minutes ago