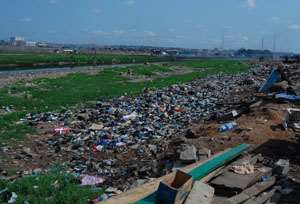 Modernity spins laughter from the gossamer of olden customs and crazy traditions.

It is the pleasant bequest of change that makes us cast florid faces and incredulous eyes, in fact, we may even chuckle looking back at entrenched practices that have fallen out of place, and lost their respected robes of honour.

Growing up in Accra, there was one particular act that I saw carried out by many connected persons. I hardly saw this custom broken.

A calculated reformer I may be, but I grew up to join the chorus of many who upon reaching the Kpeshie Lagoon had to pay a different toll: toot the horn. Yes, I had to sound the horn before crossing the lagoon.

'Inherent traditionalists'
It is reeking hypocrisy when one tribe hallows its traditions and derides another's. As an established truth, however much times may change, there are scattered tassels and tangled skeins of tradition that will never give way. They will follow our little race like a woman's flowing hair dances to the twisting moves of her lovely waist.

When I see how supposedly developed countries like UK hold on to their traditions, I wonder whether we should discard all ours, in a thoughtless dance to the stirring tunes of the changing times.

Take a look at the monarchy, an institution that the Republicans in the UK are fighting to get abolished; and yet, the general mood is for the retention of the monarchy together with many of its attendant traditions. While Britons love change, they are inherent traditionalists.

Should we as Africans discard all our traditions? Do we even know what ours are?

'Respect for a custom'
Sometimes, I look back and wonder what was really happening on that bridge requiring the need to sound my horn before crossing over; indeed, what vibes were being shared between the "god/goddess" and his or her children, as I was made to believe?

It is fascinating that I believed and indeed even venerated this tradition on the grounds, not necessarily of fear, but respect for a custom so very much practised.

It is true, times are changing, and we cannot afford to be left behind, but practical commonsense enjoins us to be selective in our modernity. As an example, despite the fact that other nations have abolished the monarchy, today, even Americans cherish the British monarch. Just espy a visit of royalty to their shores, and their seemingly obsessive admiration and raucous cheers corroborates my stance.

Saying this, it is a pertinent requirement that particularly in Accra, our capital city, we strive for a pleasant and right balance between tradition and modernity. To say that the custodians of the land are primitive for keeping traditions one does not agree with, is simply uncharitable, and can become a source of unnecessary contention and avoidable confrontation. However, to keep imposing certain outmoded practises on people, in this day of accelerated change, increasing competition, and breakneck development that is sweeping and enveloping our terraqueous globe, will surely not hold; in fact, it will not stick!

To all intents and purposes, finding such a healthy balance is a dicey issue. It does not lend itself to a quick fix or clear-cut solution—it is a trying test of our mettle and maturity as a country. And right here, respectful dialogue and civil deliberation devoid of sensationalism and heated emotions will be the trusted captain that steers us forward as a sensible people.

'Preventable accident'
Returning to my discussion of the Kpeshie Lagoon and what must have been happening on that bridge, I can even discern something more important on every road in Ghana, if not a vast part of Africa.

In my short story "Gravellatina", I described something unfortunate that happened to the heroine. "On a routine visit by her parents to Shidaaman, about fifty kilometres from Adomland, an unruly oncoming driver collided head-on with their vehicle. There were no survivors.

"This was a rather preventable accident, for this narrow road had been subject to a series of contracts that would have turned it into a dual carriageway. Not the first time such an incident had occurred on what residents now describe as Death Lane; and without doubt, the dead souls it has claimed must be in unforgivable uproar, should we behold their visible feelings, and hear their screeching voices."

It is reasonable to present the incontestable proposition that there are many roads in Ghana where shed blood could have been prevented. Yes, many roads that have become thirsty shrines receiving the priceless blood of unfortunate souls who met their untimely expiration. These roads have not been hallowed; in fact, they have been stained by irresponsibility and inaction on the part of the State. And even today, as we drive to and fro, it is heartbreaking what those perished lives would like to say to us. Would they forgive us for failing after several decades to fix the roads and potholes that claimed their promising lives? Yes, those potholes are open cups awaiting blood like quaint little pots in cloistered enclaves.

'A packed community'
What are those plaintive voices demanding of our living presidents Rawlings, Kufour, and Mahama anytime their car tyres press the spots they died? In fact, what searching and incriminating questions will these ghosts ask our leaders? Should such invisible souls continue to create more space for new arrivals in what will already be a packed community? Should we be keeping Erebus this busy?

Perhaps, if the gods on the Kpeshie lagoon were playing—or even frothing in pleasure—and needed me to sound my horn and respectfully ask for permission to cross over; I wonder what songs the others are singing on different roads in Ghana.

Will we as a nation ever hear these dolorous songs of the ghosts and fix our roads? In truth, we are capable of taking the wax out of our ears and responding with meaningful action. It lies within our collective power and strength as a gifted country. And if we do, not only would we, the living be better for it; it will certainly prevent any unnecessary addition today, or tomorrow, considering there are just too many who have left us prematurely. Should the sacrifice of these souls not immediately jolt and roust us from our age-long stupor and awaken our sense of duty and responsibility?

Mr President, will you engrave your timeless legacy on our roads? Will you hear the misereres of the dead, and stamp a perpetual delight on the face of the living by providing safer roads? And will the State improve systems to weave out unqualified and undisciplined drivers? Collectively, will we all commit to practising safer driving everyday of our lives? Perhaps, if this happens, instead of the shrills of pain from other roads in several parts of the country, we may just discern or eavesdrop something similar to the exciting vibes and fervid dithyrambs echoing from the Kpeshie bridge.

As always, I would love to hear from you; kindly send me your informed thoughts on this article.

I shall return with my talking drums.
Angelina K. Morrison is interested in national development, true religion, and self-improvement. She enjoys thinking, and writes stories only when the muse grips her. Her first short story, Gravellatina is a breathtaking five-part gripping series available now at Amazon. You can email her at [email protected], or find her at www.angelinakmorrison.wordpress.com or Facebook page.