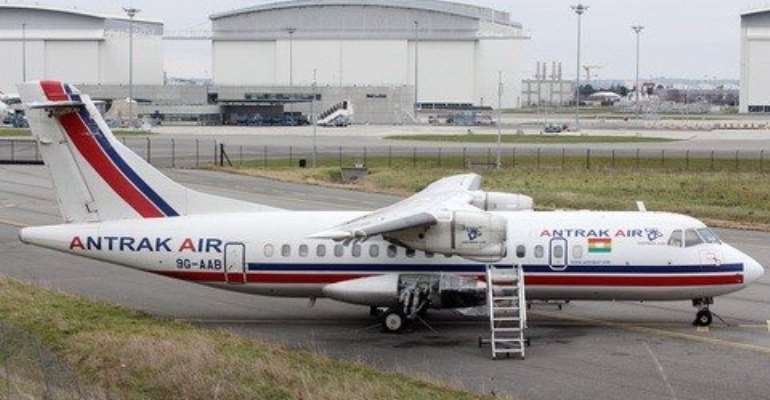 Antrak Air has suspended its operations for the next three months following challenges with its wet lease arrangement with Swift Air, a Spanish airliner, for the use of the latter's two ATR 72-500 turbo prop aircraft, B&FT has gathered.

The suspension of Antrak's flights from Accra to Kumasi, Takoradi and Sunyani, and Tamale over the period is expected to push up domestic air fares due to anticipated increase in demand that has to be contained by the two other major local operators Starbow and Africa World Airlines (AWA).

A wet lease is an arrangement whereby one airline provides an aircraft, complete crew, maintenance, and insurance to another airline that pays by hours operated. The lessee provides fuel and covers airport fees, and any other duties and taxes. The flight also uses the flight number of the lessee.

The airline in a statement issued to travel operators and sighted by the B&FT said it is notifying operators of "the suspension of our operations for the next three (3) months, effective 10th June 2015".

"During this period we will be looking at re­organisation, as it concerns our business model. We have been compelled to strategically suspend all operations from the domestic market, with the aim restructuring to meet the rapidly changing and competitive environment.

"We are in advanced talks to take delivery of our own aircraft, which will give us more flexibility and less restrictive scheduling. We will return with the most convenient schedules, competitive fares and friendly service.

"We would like to take this opportunity to thank you for your continuous support, and we also look forward to welcoming you on our flights in the near-future," the company said.

The latest setback in Antrak's operations affirms challenges the company has been going through in the aviation industry since it launched into the Ghanaian airspace 12 years ago.

In 2013 the Founder and Chairman of Antrak Group, Alhaji Asuma Banda, told the B&FT that the company was contemplating pulling out of the country's airline business due to challenges in getting passengers - despite a reported increase in domestic travel figures - a huge infrastructure deficit, high cost of doing business, and regulatory failure having made the domestic airline business unprofitable.

Antrak's operational difficulties contrast with a widely-held view that the aviation industry is one of the most booming industries in the economy, attracting several airline operators into the country.

Latest figures obtained from airport authorities show a significant growth in transit passengers and cargo throughput for the Kotoka International Airport (KIA) for 2014, pointing to the growing importance of Ghana as an aviation hub in the sub- region.

Started over a decade ago by Antrak, the four main domestic destinations are now served by two active domestic operators - AWA and Starbow.

Domestic passenger throughput has been growing by some 10 percent year-on- year over the past decade. The Accra-Kumasi route is busiest, followed closely by Tamale and Takoradi.

The increase in transit passenger throughput has been attributed to the growing presence of regional and international airlines in Ghana and the choice of consumers to use the KIA for on-ward connections to mainly Europe, the Gulf, and Asia due to the good safety record of the country - bar the recent cargo aircraft accidents in recent times.

"Antrak Air wishes to apologise for all the inconvenience caused by this suspension.We have made contingency arrangements to ensure that all clients holding our tickets for future travel before our resumption date will be adequately taken care of by our personnel at the airport," the company assured in the statement.

I can’t blame my visa denial to Netherlands on anti-LGBTQ+ a...
17 minutes ago