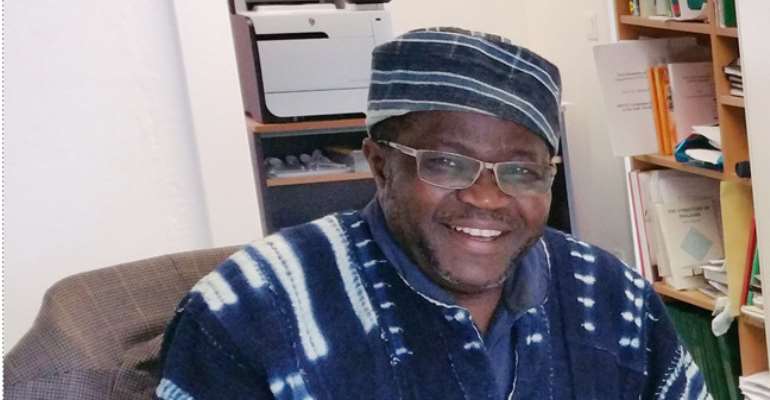 There have been recently a lot of publications on the Chinese in Africa, some of these writings are from quarters that have their own imperialist interests to defend but others are from Africans who are worried by what they consider Chinese encroachment on their rights, especially as regards land ownership and use. It is therefore refreshing to see for a change a scholarly work that deals with the African presence in China.

Dr. Adams Bodomo wrote Africans in China: A Sociocultural Study and its Implications for Africa-China Relations. (Cambria Press, Amherst, New York, 2012) in order to answer the question “What is it like to be an African in China?

Bodomo, a Ghanaian, who was Professor of Linguistics and African Studies at the School of Humanities, University of Hong Kong, and now Professor and Head of the Department of African Studies, University of Vienna, graduated from the University of Legon, Ghana and obtained his doctorate from the Norwegian University of Science and Technology. Dr Bodomo visited towns and cities in China where he thought he might meet Africans. By use of questionnaires and personal interviews, aided by two assistants, he contacted Africans in Guangzhou, Yiwu, Shanghai, Beijing, Hong Kong and Macau.

Bodomo is obviously a very scientific scholar and begins his book with definitions of the concepts he would be using throughout his book: “African”, “African community”, “China” and, “diaspora”. I was pleased to note that his definition of African is very inclusive: “The term African as it is used here is first and foremost meant to refer to someone who is a citizen of any of the countries in Africa. It also includes people who are not citizens of any of the countries in Africa but who consider themselves to be from Africa or to be of African origin”. This definition allows Bodomo to consider Africans from North African countries who sometimes deny they are Africans but assert their African connection when there is an advantage to be gained. The author encountered a white South African who swore he came from Australia but was given away by his heavy South African accent.

Dr.Bodomo estimates that there are 2 million Chinese living in Africa but only about 500,000 Africans in China.

Africans in China are involved in various trades and activities. There are teachers of English, retail shop owners, athletes, football players, government officials such as diplomats, students, artists, musicians and drummers. There were many traders who came to China to buy goods and send them back home. Some stayed for short periods whilst others such as students stayed for periods as required by their studies. There were also African tourists said to number in 2010, 93,000, some 79,000 of them coming from South Africa.

Dr. Bodomo questioned the Africans he met, inter alia, about their occupations, their native languages, their proficiency in Chinese and in English, communication problems, whether they ate Chinese or African food and whether they identified with the host community. I was very interested in the issues relating to languages and the learning of Chinese since language is a most important factor in integration in any society.

Some of the Africans Bodomo met complained about racism and other kinds of discrimination which may be due to linguistic and cultural misapprehensions. Most Chinese were positive towards Africans and very curious about Africans since many have not previously come into contact with any Africans. My personal experience in China would confirm this. Many Chinese want to take a photo with you and I was held up for minutes by crowds who all wanted to take photo with me. A man even approached me saying his wife wanted to take a photo with me. What can you do under such circumstances?

In each area, the Africans were asked questions relating to every aspect of their lives in China as well as their backgrounds date and place of birth, level of education, gender, occupation, nationality, native language and other languages spoken, proficiency in Chinese and English. Questions were also asked about religion, food and social activities.

All the subjects treated and the questions asked are supported by tables and full statistics. I sometimes got lost because for each area the same questions were asked and similar statistics were provided. Sometimes I felt overwhelmed by the detailed questions and answers but I suppose in a scientific work this is unavoidable. This makes the reading sometimes hard going. There are also photographs of peoples interviewed and places visited. I wish the photographs were of better quality.

In his conclusion of the study, the author mentions that some Africans complained of police harassment and constant pressure from immigration authorities, including border guards, customs officials and police. Africans felt they were more subject to such official pressure than other non-African immigrants. It seems anytime a major event is being organized in China, there is an immigration crackdown on Africans. The example is given of the 2008 Olympic Games where Africans experienced Chinese official interrogations more than other immigrant groups. Many African wondered why the Chinese treat them in this way whilst Chinese in Africa live in peace and quiet.

Professor Bodomo concludes that the substantial numbers of Africans who go to China are looking for business opportunities. In Guangzhou and Yiwu markets Africans do good business buying manufactured goods and sending them to sell in Africa for profit. Many Africans such as those in university campuses of Chongqing and Wuhan seek education.

Most Africans continue to use their own languages among themselves and sometimes, French and English but with the Chinese, they use calculator communication, with phrases in English and French to negotiate business. The calculator language, as I experienced myself, is good for bargaining and sometimes leads to hilarious situations when wrong buttons are pushed.

Adams Bodomo concludes that, “On the whole, Africans in China do not trust law enforcement officers, especially police and immigration officers, who are wont to harass them. Though these officers are often professional in their dealings with Africans, I also heard many reports from Africans during the course of my fieldtrips showing police disrespect for African migrants in China.”

As regards the future of Africa-China relations, Prof. Bodomo states:

The implications of the conclusions I have made in this study are that China will remain an important element of Africa's experience with globalization for a long time to come. As China takes on a prominent role in world political, economic, and cultural affairs, the country will witness an increase in migrations of people from all parts of the world, not least Africa, and scholars must beginning to pay attention to these and other issues in future research. The Chinese are in Africa to stay, and reciprocally, Africans are in China to stay. Africans are in China because Chinese are in Africa”.

It is difficult not to agree with the views Bodomo expresses here but I would like to emphasize that we must let the Chinese understand, in unmistakable language, that we Africans have had enough of discrimination and are no longer prepared to take any form of discrimination even if it comes from a mighty and friendly country. But can African leaders make this clear to Chinese leaders? It seems some of our leaders have already compromised themselves in such a way that they can hardly criticise the Chinese or speak clearly to them. This brings us to the often heard complaint about bad behaviour of the Chinese in Africa.

It is often said that the Chinese are taking land in Africa and are involved in illegal digging for minerals in countries like Ghana. My comment is simple and corresponds to what is written to the Foreword by Prof.Kwesi Kwaa Prah in Africans in China:

“The challenge is not for us to moan about Chinese racism and lack of altruism in their dealings with Africans on the trade and economy front either on this continent or in China. It is for us to know that all nations particularly the “big ones” act in their own enlightened self-interest”.

If the Chinese are grabbing land in Africa or even shooting persons in their search for minerals, clearly the complaints should be directed to African governments and not to the Chinese, however deplorable or criminal their conduct in our land may be. But these are political matters that are not necessarily within the purview of Africans in China

Prof. Bodomo has produced an excellent book that will be for years to come a standard work for scholars. The book could have been written only by someone who has a mastery of the Chinese language as well as English, French and other African languages. Scholars and other linguist may have their own comments on the book but as a non-linguist, I am grateful he undertook the task. Two points I will always retain are: the African who was surprised that the Chinese do not speak English and the complaint by some Chinese that the Africans are dating intensively Chinese women. What did they expect?

Note
Adams Bodomo is scheduled to deliver on 10 June, 2015, as Professor of African Languages and Literatures at the Faculty of Philological and Cultural Studies, University of Vienna, his inaugural lecture entitled “Exploring Global Interdisciplinary Research Trends in the Humanities.” The lecture is regarded as a historical event since this is the first time in its 650 years of existence that the University of Vienna has appointed an African to such a high academic position. The African Community will be fully represented and hopefully some African music will be played.