The Harrowing Activities in Kumasi Zoo 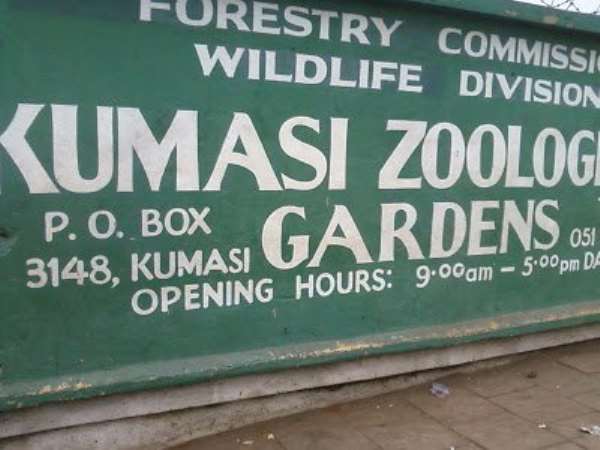 The once biggest and famous zoo in Ghana is incontrovertibly the one located in Kumasi central. A patron or tourist greeted at the entrance with beautiful artistic work exquisitely embossed on it ‘’KUMASI ZOOLOGICAL GARDENS’ ‘upon touring the zoo sees the content is no near what has been embossed at the entrance. The empty cages have left many patrons or tourist wondering whether the zoo is now a museum or a science laboratory for all the second cycle institutions in the Kumasi metropolis; the sudden visible three story building being put –up by a private man vis-à-vis the new parking lot for Bentronic Agro Chemicals in the zoo. A tourist leaves the zoo emotionally disappointing and shocking after realizing that the once vibrant state owned zoo and even the biggest is gradually getting to naught.

The zoo from my perspective should now be called a science laboratory since it has experienced massive depopulation with reasons best known to management. Many would attest to the fact that; Kumasi zoo used to be well stocked with different animal species (rare and endangered animal species) and hence attracts tourists both domestically and internationally. Today one would overly be shocked and devastated upon visiting the once vibrant Kumasi zoo and seeing how scanty and empty the cages are! .the rare and endanger animal species that were initially transferred from Accra to Kumasi to pave way for the construction of the flag staff house; the seat of Ghana’s presidency have all died except the eagle; this according to an insider under unanimous condition zoo was out of negligence. The zoo manager who was employed into the division as a specialist in treating the animals whenever they are affected as well as ensuring preventive measures has being far from his duties.

Another insider who has worked in the zoo for nine years attributed the deplorable and unattractive environment of the zoo to the actions and inactions of the current manager by name Mr.Stephen Tamanga;who took over the helm of affairs three years ago, this same person would wish to passionately appeal to the headquarters to swiftly come the their aid.

Another reliable intelligence gathered reveals that, the routine system of cleaning the cages has been met with impediments such as the rickety nature of padlocks, makes one uses close to thirty minutes before it opens; this action leaves the dwelling cages for the rare or endangered species of animals prone to bacterial infection and its subsequent consequences.

I was extremely saddened ,startled and frustrated when I visited the western side of the zoo affectionately called ‘’culture’’ and to my dismayed saw a three story building being put; 80% completed with two cargo trucks parked besides it and embedded on the trucks is Bentronic agro chemicals and I quizzed one wild life officer of what I saw , he said ’’ my brother that is Ghana for you’’ he further explained that ,they were told by management that a private man is to complete an uncompleted canteen that was initially started with the zoo’s internally generated fund(IGF) some time ago and now many of the workers in the zoo are left wondering how that agreement was reached with the private man. Besides, what even shocked them was the three story building being put-up instead of continuing on old foundation of the canteen. This same interviewee on condition of anonymity said reliable information they had was that the those at the helm of affairs have had their palms greased by one Mr. Ben who the claim to be the private developer of the so-called canteen, and that Mr. Ben had planned to use the down floor for the canteen and the three top-floors for his commercial purpose so what this means that, one side of the zoo would be opened for commercial purpose vis-à-vis intrusion, noise, and many more unhealthy activities and thus disturbing the serene environment that the animals ought to enjoy.

I therefore wish to bring to bear the ill happenings in the Kumasi zoo and also calling for an independent investigation to confirm or deny the allegations leveled against top-management especially the manager of the zoo and should really allegations be true then, I recommend that the manager and his cohorts be removed from there and the illegal structure be demolished as well as bringing to book the perpetrators of act.