CAN And Cash For Arms: A Total Disgrace 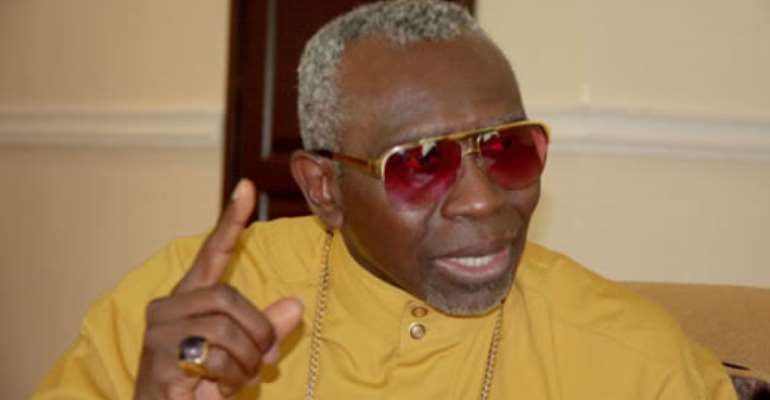 A nightmarish scene played out in far away South Africa a couple of weeks ago when, on September 5, 2014, a jet owned by Pastor Ayo Oritsejafor, the President of the Christian Association of Nigeria (CAN), was caught at Lanseria, South Africa stashed with $9.3 million undeclared cash and invoices from two companies, Tier One and the ESD International Group Ltd (ESD) of Cyprus, for armaments and a helicopter.

This questionable misadventure promptly got the official endorsement of the government of President Goodluck Jonathan which announced that the money was purportedly meant for the purchase of arms for the Nigerian forces through the black market! This incident, and the government's sordid claim, marked the latest stage of the nation's crisis of disrespect of rule of law and cover-ups that have heightened Nigeria's poor reputation beyond its borders.

How can the government possibly justify its claim that it was procuring and intending to pour about $9.3 million worth of unmarked weapons and military equipment into a very volatile, unstable and crisis-ridden zone of the country where Boko Haram had confiscated military equipment and used them to kill our soldiers and civilians?

And how does the government justify that it hired a private jet belonging to the CAN president or his company, to procure equipment to combat a group they say is an Islamic sect bent on islamising Nigeria? Since the tenure of President Goodluck Jonathan, Pastor Ayo Oritsejafor's influence and sordid privileges have soared- they were even together on a pilgrimage last year- but no one really expect that the pact of association will extend to glaring act of disrespect for rule of law. Some may consider this not to be a big issue, however it is.

The Nigerian government said it had made available to the South African government indisputable documentary proof that the intended purpose for the stashed cash was legitimate. But information from South Africa seem to contract Nigeria's claims. In fact, the erudite Guardian newspaper columnist Sonala Olumhense succinctly pointed this out in his piece "Cash For Arms, And Other Tales", that "Anyone looking for further proof those documents were manufactured should consider that, according to the National Prosecuting Authority, “The agreement between Tier One and ESD was concluded only on September 8, three days after the money was seized at Lanseria.”

The import of this information is that those documents must have been rigged out of a printer on board the luxury jet because Tier One is unknown to South Africa's National Conventional Arms Control Committee and was not authorized to enter into any agreements regarding the sale and/or rental of the kinds of equipment Nigeria claimed to seek. The South African authorities, who may have placed the arms-buyers from Nigeria in separate rooms and grilled them individually, also stated that “their explanations were flawed and riddled with discrepancies" One of those discrepancies and queries has to be this: Why would Nigeria have been seeking to buy from Tier One in South Africa, which was going to buy from ESD in Cyprus; doesn't Oritsejafor's jet fly to Cyprus?

To call the incident shocking and a national embarrassment will therefore be an understatement, but that the President's spin doctors immediately sprung into action to verbally launder it is indeed scandalous. Perhaps it will take the full weight of our judicial system to demand that the Nigerian Government uphold the rule of law, along with the general outrage of ordinary Nigerians to goad the National Assembly into reluctantly accepting their responsibilities to put Nigerian interest ahead of narrow and shortsighted partisan politics.

It is time once and for all that our federal politicians take full responsibility for a wholly unacceptable pattern of disrespecting the rule of law, myriad of sleazes and cover ups. If they do not hold an honest and open inquiry on this incident, their silence will reaffirm to the world that we condone this scandal and would irreparably harm the reputation (whatever is left of it) of this potentially great country.

Our government simply can not continue to make critical decisions that affect us all with stakes that are too high for us and our future generations to bear. As numerous media reports have noted, could the flagrant contravention of the South African law and other laws governing the movement of cash and the purchase of arms and ammunition prove that the intended transaction was illegal and is possibly intended to smuggle arms to Nigeria to continue to equip terrorists in the North, pirates and militants in the Niger Delta and other forms of insurgence in Nigeria?

After all, Pastor Ayo Oritsejafor sits on the board of the company, Eagle Air Nigeria, that leased his luxury jet that discreetly flew into Lanseria, a private airport north of Johannesburg. That a decision was made by the Federal Government to procure arms through the black market on a jet owned by Pastor Ayo Oritsejafor may be shocking, what is indeed worse is the strong message that the Federal Government is sending out that the works, utterances and actions of the CAN president, however incriminating, enjoy the express endorsement and political cover of the presidency, even as the CAN headquarters evolves into a more diffused arena for religious intolerance.

When the founding fathers of CAN met on August 27, 1976 at the Catholic secretariat, Lagos to create the organisation, they envisioned an organisation that would represent a platform for all Christians to promote cooperation among Christians, interfaith harmony and safeguard the welfare of all Nigerians. However on the impetus of a single man, the lofty ideals of the founding leaders have mutated into a mandate to pursue selfish interests, spread fear and engage in wall-to-wall hate mongering, particularly those spread through the use of modern multimedia.

And no one seems to be doing a better job for the CAN than the fire-brand and CAN's poster boy Pastor Bosun Emmanuel, who, in his latest 1-hr long schizophrenic and brain numbing ranting before a packed Redeemed Christian Church of God audience during the period of the last National Conference, spewed out factual confusion mixed with spiritual shortsightedness- all to the admiration and applause of his hapless audience.

Inept and ignorant, Pastor Bosun Emmanuel (he claims he had returned from Germany in 2006 where he served the Redeemed Christian Church of God as the National Co-ordinator, to "serve the information needs of the church" because "the church in Nigeria lacks information") set off in his hate speech by first quoting the Wikipedia on a fictitious "Abuja Declaration 1989" drawn up by the Islam in Africa Organisation (IAO) to islamise Nigeria. While Pastor Bosun Emmanuel goes around the country spouting the hate-filled propaganda, his foot-soldiers have proliferated the internet with the hate speech. A quick check on WIkipedia will reveal that this fictitious declaration was a regurgitated lie from an online anti-islam propaganda archive, and had been deleted by Wikipedia as a junk material.

The editing history on WIkipedia of the primary source of Pastor Emmanuel shows that the referenced page, before it was binned by Wikipedia was put up at the time of his talk. The obvious question to ask is this: could this have been a coincidence, or neatly arranged to lend some credence to his brainwashing sessions? But the pastor's ranting went beyond the sport of usual Muslim-bashing. He directly accused His Eminence Muhammadu Sa'ad Abubakar IV, the Sultan of Sokoto and spiritual leader of the Nigerian Muslims of actively championing anti Christian agenda on behalf of the Muslim community. Yet in contrast to the CAN president, the Sultan is a highly respected voice not only for tolerance, respect and justice for all Nigerians, but for peace and reconciliation between Nigerian Muslims and Christians specifically. The Sultan's record and public esteem attest to the fallacy and alarmist suggestions of Pastor Bosun Emmanuel claims. More egregiously, Pastor Bosun Emmanuel omitted the inconvenient fact that Cardinal Onaiyekan and the Sultan of Sokoto were even considered for the Nobel Peace prize award.

Typically, Pastor Bosun Emmanuel told his audience that he had only come to give them information, and whatever they did with the information was their business. This is exactly how these hybrid Christians and zealots put on the fire and then they leave it to burn. Of course the "information" he gave the audience included a strong plea, repeated so often in his speech, that the audience vote for President Goodluck Jonathan in 2015 because "he is a man ordained by God" for a specific purpose in Nigeria! During the just concluded National Conference this same mercurial personality, Pastor Bosun Emmanuel, a CAN delegate from the South-West representative of CAN, a member of the Religious Committee and Interfaith Committee at the conference, told a gathering made up of some Christian leaders that Boko Haram group was a premeditated plan by the Organisation of Islamic Cooperation (OIC) to destabilise the country, with a follow up of Islamisation of Nigeria. Yet, the OIC is an organisation that has 57 member countries, 56 of which are also member states of the United Nations.

The Islamic Development Bank (IDB), an international financial institution founded by the OIC has been contributing to economic development in its member countries, among which are Cameroon, Cote d' Ivore, Benin, Mozambique, Uganda, to mention a few. All these countries have substantial Christian populations, albeit peace-loving and tolerant Christians. The deliberate misinformation parroted by Pastor Bosun Emmanuel would have been an entertainingly outrageous gaffe if not for its dangerous effects. The insane claim that an organisation like the OIC is using a terrorist group which by all accounts have killed, directly and indirectly, more Muslims, to Islamise Nigeria makes clear that he is a dangerous loose canon and a religious gunslinger in the employment of CAN.

In Nigeria it is not illegal to daydream or to present controversial opinions or materials which are subjectively offensive. However, it is individuals like pastor Bosun Emmanuel that are most dangerous in any society. They act as hate theologians and infuse in people the notion that hating others is necessary for their salvation. No matter how intelligent a person is, everything he knows if from around him. Through propaganda war, it is possible to fashion an organic robot, and an hitherto intelligent person is made to become averse to the mention of certain words and hate others through the fear.

Fear of survival can create many things and it is in this business of creating fears, that some make billions. What the Nigerian law should prohibit are publications and speeches that are hateful and incite to hate. What these mercurial and bizarre personalities are doing through the legitimacy of a body like CAN is marketing their credo of hate to the unsuspecting public and creating fear of a mythical rapacious Islam bent on forcefully bringing everyone into its fold.