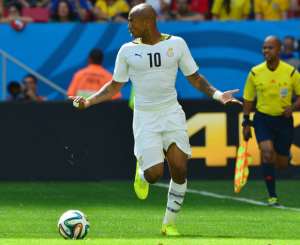 Following Africa's exit from 2014 FIFA World Cup, African Football takes a closer look at which players shone bright for their respective countries and left a lasting impression on the world.

Ghana always had their backs against the wall after being drawn in the 'group of death' alongside Portugal, Germany and USA.

Still, they proved to be fiercely competitive but could not do enough to make the knockout stages of the tournament after finishing third in Group G after losing to both USA (2-1) and Portugal (2-1), but earned a commendable draw against Germany (2-2).

The shining light and rising star from their time in Brazil was Andrew Ayew who offered Ghana so much more than the two goals he scored in the tournament (against USA and Germany).

The 24-year-old has become a real leader for the Black Stars and his feisty character shone through in 2014.

He's now adding goals to his all-round midfield game and is on course to become one of Africa's finest players.

Following his performance at this year's World Cup rumours have also emerged that the Marseille man may be the target of English Premiership clubs Manchester United and Liverpool, but he has hinted at his interest to play in Germany.

“Bundesliga is one of the strongest leagues in the world. I can certainly imagine playing there to hone my skills,” said Ayew.

Let us not forget the tried and tested Asamoah Gyan who also showed himself, yet again, to be one of the best African strikers in the world with his two World Cup goals against Portugal and Germany.

Speaking after the tournament Gyan apologised to his nation. “We went to a tournament to make the nation proud but things didn't happen,” said the striker.

“All I have to say is sorry to all Ghanaians for our performance.”