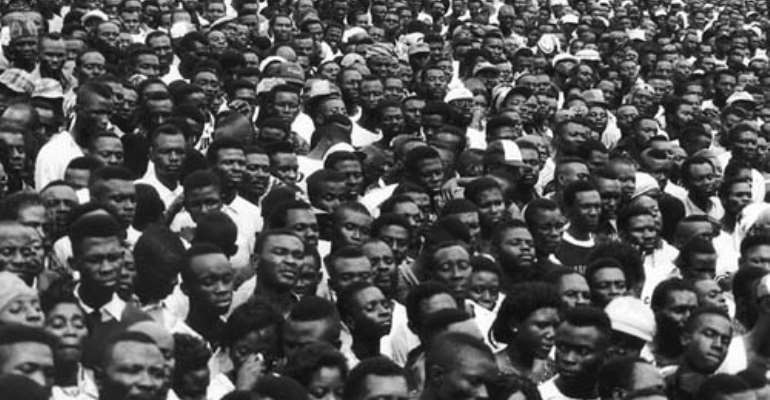 Kumasi, May 9, GNA - Thousands of people from all walks of life on Sunday trouped to the Kumasi Sports Stadium to witness and observe the durbar of chiefs and people of Asanteman as they marked their 'Adae Kese' festival. The huge crowd that besieged the stadium was however, not surprising since the aroma of the 'Adae Kese' festival had already engulfed the country and the world as a whole. The expected crowd started gathering on Saturday evening when most of the invited guests, dignitaries, tourists, officials and other people from different direction of the country started arriving in the Garden City. As at 6 am on Sunday morning, paramount chiefs, divisional chiefs, linguists, fetish priests and other people dressed in their beautiful and gorgeous kente cloths and other traditional wears from all towns and villages in Asanteman and beyond also started to fill the stadium. The long retinue of chiefs, queens and people brought traffic on roads leading to the stadium to a total halt. The arrival of President J.A. Kufuor and other invited Heads of State and dignitaries to the stadium ignited the crowd into jubilation as they sang, dance and cheered the President and his entourage. The Asantehene, Otumfuo Osei Tutu II dressed in a rich kente cloth and adorned with gold bracelets and necklaces arrived at the durbar grounds in a palanquin dancing to the throbbing of 'fontonfrom' drums in a long retinue of courtiers and other chiefs. The dancing of the Asantehene brought a tumultuous jubilation from the crowd some of whom also danced to the numerous traditional songs played by a number of cultural troupes at the durbar. The beautiful display of Asante culture and tradition at the durbar grounds overwhelmed the tourists and other foreigners who were experiencing the Asante culture for the first time. The durbar ended with the Asantehene offering 'Adae Nsa' to all the chiefs who participated in the festival. Asantehene challenges chiefs to initiate projects to benefit their people Kumasi, May 9, GNA - The Asantehene, Otumfuo Osei Tutu II, has charged traditional leaders on the African continent to initiate programmes and projects that would help find solutions to the many challenges facing their people.
He said traditional leaders should not leave government alone to solve the problems of the people.
"We have an obligation to intervene in socio-economic development if we are to be relevant in today's world," he stressed.
Otumfuo Osei Tutu made the appeal at a durbar of chiefs and people of Asanteman to mark their 'Adae Kese' in Kumasi on Sunday.
The occasion also marked the fifth anniversary of the enstoolment of Otumfuo Osei Tutu as the 16th occupant of the Golden Stool.
Otumfuo Osei Tutu said it was motivation and his commitment to help reduce the problems facing the people that encouraged him to initiate a number of projects in Asanteman.
He said the institution of the Otumfuo Education Fund had helped many children to acquire education while health and HIV/AIDS projects had also helped to reduce mortality in many communities.
Otumfuo Osei Tutu stated that it was time the chieftaincy institution embraced the computer revolution and introduced it to the children.
In this direction, he said, a modern leadership training and resource centre would soon be established in Kumasi to bring together all the hidden talents in the country to be exposed to Information and Communication Technology (ICT).
Otumfuo Osei Tutu spoke about the Golden Stool that united the people of Asanteman and said "we love our culture and our proud heritage", adding that, "we have it as an obligation to renew the bonds that tie us together and resolve to love our motherland Ghana."
He said no nation could make any meaningful strides if it neglected its culture and urged the people to continue to drum up the beauty of their traditions and marry it to the demands of the modern era.
Otumfuo Osei Tutu thanked the President of the World Bank and his team for recognising the potentials of traditional leadership and culture as partners in socio-economic development.
On the African scene, he said the Manhyia Palace would forge a closer links with other African traditional leaders to form a union of African traditional leaders that would be recognised by the African Union (AU) as a veritable partner in the development of the continent.
He thanked all those who had supported his initiatives and said the tremendous response received from both local and foreign individuals and organisations indicated that there was greater support out there for visionary leadership and development-oriented actions.