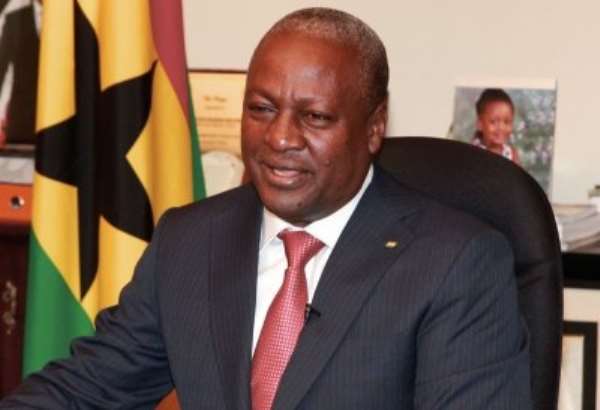 I may have struck on yet another of my brilliant schemes. Some of my opponents would describe the scheme as “diabolic”. Well, in politics, sometimes, the more “diabolic”, the higher the chances of success. So you may christen me “Diabolic” Kofi Dubai for all I care, the scheme will go ahead full steam.

To be honest, I don't do very well in the ideas department, especially those of a “diabolic and Machiavellian” nature. Why should I when I have a well-staffed, well-remunerated team in that Department whose salaries will never be the subject of a freeze in salaries adjustment as long as I remain the Chief Tenant at The Jubilee House.

Talking of Jubilee House, I must remind myself to invite Kofi Diawuo to visit his creation for which he received a lot of flak.. Kofi Diawuo was a true visionary leader, if ever there was one. Ghanaians are generally described in unflattering terms on the subject of maintenance. One person I shall grudgingly set apart from the earlier generalization is Kofi Diawuo. After inheriting Peduase Lodge that was in a state of disrepair at the time that he took office, you should have seen the magnificent state of Peduase Lodge at the time Kofi Diawuo was exiting the Presidency. Both edifices- Jubilee House and Peduase Lodge - are now not in quite the same exquisite and pristine state as when bequeathed to us by Kofi Diawuo. Why? Because the “meat is down to the bone”. But both edifices still sparkle.

It was on one of my numerous trips outside the country that I organized a brainstorming session among my advisors and aides in my presidential suite. True to form, this brainstorming session was not at all about economic solutions but rather about political solutions. The topic was: “how do we blunt the message of our opponents, the NPP, in 2016?”.

The discussants were divided into two groups – A and B. Each group was tasked to come up with one strategy each and reconvene after an hour.

Group A suggested adopting the Free SHS message of the NPP in 2012.

It is the suggestion of Group B that I wish to dwell on.

Group B was of the opinion that on a scale of 1 to 10 on the management of the economy (10 being great and stellar), the NPP was at 8 and the NDC was at 3. Given the state of the economy now and probably in the next couple of years, the NDC will drop further to near 0 levels on this scale. This does not bode well for victory in 2016. Against this backdrop, Group B felt that the best way forward was to make the economic mess come 2016 a “joint project” with joint ownership. In other words, we share the blame with NPP.

I preened my ears to hear my aides and advisors explain how the “economic project” was to be implemented.

The first step was to organize a no expenses-spared, grand National Economic Forum (NEF) with all - to use that favourite word of Ghanaian politicians - “stakeholders”. Officially, the purpose of the NEF would be to deliberate and strategize on the economic way forward for Ghana. Unofficially of course, the purpose is “Kofi Dubai for Jubilee House in 2016”.

Some would rightly ask: the NPP, through Hon. Yaw Osafo-Maafo, Dr. Bawumia, Dr. Akoto-Osei and others, have given enough suggestions which if implemented would get Ghana out of the economic doldrums. Fair question. The Propaganda team is still working on an appropriate response to that one.

A large part of the successful prosecution of this “economic agenda” as suggested by Group B would depend on how successful we are at giving Religious Leaders, Chiefs, the TUC and others a lot of prominence at this economic forum. That way, they can – wittingly or unwittingly – further propagate “Kofi Dubai for Jubilee House 2016”.

The propaganda refrain in 2016 would be – “why, we were on track to achieving our economic goals but the recommendations of the NEF (at which the NPP played a prominent role) tied our hands”.

Kofi Dubai (His Excellency in Showmanship and Communication).

The author has 49 publications published on Modern Ghana.

NPP may lose 2024 elections if Bawumia is imposed as flag be...
48 minutes ago

Keep quiet and concede defeat because you couldn't perform —...
58 minutes ago