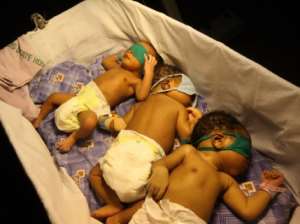 I am a nurse and every profession has ethics. But the imperfections of our human institution call for ethics in all endeavours. Sometimes, the mannerisms of some health workers in Ghana are disgustingly appalling.

I am increasingly becoming exasperated and so angry with the unfolding and winding issues concerning the missing baby at Komfo Anokye Teaching Hospital (KATH).

I am without a shred of doubt that the event of stolen-missing babies isn't new to KATH and perhaps other health facilities. I strongly believe several unsuspecting clients and parents have gone through this ordeal especially let's-give-everything-to-god and faith-blinded Ghanaian people.

I find the cock and bull stories of the nurses worthy of igniting extreme anger on the part of the troubled family – provocative lame lies without bearing. No correlation and cohesion!

Hmm, the nurses said the baby was dead. When the supposed dead baby relation demanded for the body, they produced a dead baby girl. The relation said no way because it was a baby boy delivered and not a girl. The “baby stealers” then claim the dead baby was buried by the morgue man. Ok, the baby owners said, show us where he was buried? Then the nurses said the dead baby was burnt! Jeez, burnt? How could you burn someone's nine months labour just like that without consent!

Let's ask ourselves the salient questions. In the health delivery system, it is the doctor (or co-equal) who can confirm the death of a patient even though nurses have the competence. So, who certified the baby's death? In nursing, there is this slogan that "if it is not documented, it never happened". Who recorded the death? Please KATH, this is not funny.

I was particularly happy when stakeholders and shareholders of the baby invaded KATH with all preparedness to fight to death. That's the only language Ghanaians understand. You can't settle baby stealing case with diplomacy or dialogue as the KATH management tried to do. Just produce the baby alive or dead. And if produced dead – a paternity/DNA test must be done for veracity.

In the midst of all the hullabaloos, may I ask where Nana Oye Lithur is? She has been dead silent on human rights issues lately. I am tantalised by her inability to continue to make the noise that presumably made her a minister. I know she would have been loud on this saga in her non-appointee days. Not quite long ago, Joy News guys expressed frustration in accessing her for an interview and when she was finally reached she declined commenting on it. It was a human rights issue of children walking 3 hours on accident-prone road to school. What has power done to my vociferous iron lady? Please Oye Lithur; Gender, Children and Social Protection Minister must wake up – you are conspicuously missing in action.

The excruciating part of the whole caboodle is the media - so shameless in their reportage after the family and friends beseeched KATH to demand for their baby. One newspaper headline went like: “Muslim Zongo Youth Attack KATH Staff”. Gosh! The supposed attack has taken centre stage of major bulletins and sections in the media. This is very shameless to say the least. Is it a crime to live in Zongo or be a Muslim? Or Muslims in Zongo do not have rights? Or it is an attempt to revive the misconception of how lawless Muslims or Zongo Youth can be?

I just can't understand these persecutory news headlines in the name of marketing gimmickry to sell tabloids of dubious validity! I am not a journalist or editor but the most suitable headline could have been “Family and Friends of Missing Baby Beseeched KATH Staff”.

I honestly thought the media had only lost the battle of fair and professional reporting on the realm of politics – but I can bet with my balls that they have lost everything. We cannot certainly bank our last hopes on the media – it is omni-diversely polarised beyond redemption!

If the fuss made out of the said attack was fractionally given to the missing of the baby – the baby would have been found by now. The media should not underestimate their power – they can truly provoke a regime change. They can evolve an angel from a demon. They ought to be choosy in their words and be ethically professional in their conduct. Media entities should learn and take cue from “News of the World” newspaper scandal, Rupertgate relative to their nemesis on unethicalness.

By the way, KATH staff can go to strike till Jesus' Return but the missing baby must be produced DEAD or ALIVE!