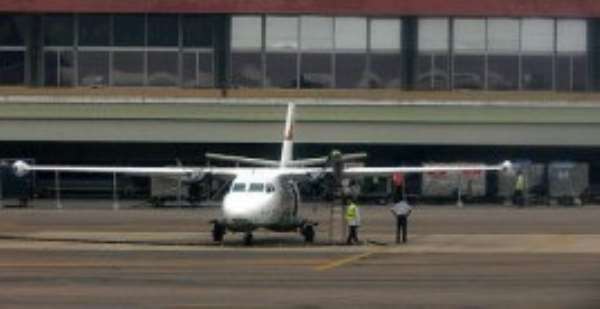 The decision of government to construct an international airport in Tamale and the subsequent approval by Ghana's parliament of a loan facility to execute that project reveals a lot about us as a people. We have our priorities messed up and one tends to wonder what type of thinking goes into such decision making processes? I am tempted to believe the entire decision making chain is compromised or the chain really does not work.

Anytime one begins to think about the development of Ghana and why we are where we are today despite the plethora of resources (both natural and human) and the incredible potential, two words keeps coming up; bad leadership. We have a lot of bad and incompetent leaders all over the place from the technocrats at the Ministries, Departments and Agencies (MDAs) to the politicians (both in government and in opposition).

The principle of resource allocation and good management requires that limited resources must be allocated to projects that will make the greatest impact on our people. In my humble opinion building an International Airport in Tamale is not one of those 'great impact' projects. In other words it is a waste of the country's resources to inject over $174 million into an airport that will become a white elephant upon completion. The people of Tamale should be against this project if they consider the opportunity cost of building an international airport in Tamale. In the first place let's consider the following undeniable facts;

• The northern regions are among the poorest in the country, hence the idea behind SADA which is meant to bridge the poverty gap between the north and south.

• It is also a fact that most of the wealthy people from these regions reside in the southern sector of the country, mainly in Accra and Kumasi.

Considering these facts, it is obvious that even if KLM or Delta Airlines decides to fly to Tamale they will hardly get enough passengers to justify that decision.

A few years ago travelers from the northern part of the country travelled by road to Accra to board international airlines to travel outside of Ghana. With the advent of domestic airlines, travelers from Tamale are able to fly into Accra and connect to wherever they are travelling to internationally in less than 90 minutes. Given how easy it has become to travel domestically by air, how do we justify spending over $174 million to build an international airport in Tamale whereas a few kilometers from the airport, people do not have portable water?

I have heard various very weak and laughable justifications for this project such as:

• The airport will serve the Sahelien region of West Africa

• An airport city will spring up around the airport

• It will be a regional maintenance bay
It is difficult to fathom how Hajj, which occurs once every year, will be used to justify a $174 million investment. We are well aware that the targeted Sahelien countries already have functioning international airports. I am unable to comprehend why Lufthansa or Emirates will not fly directly into Bamako or Ouagadougou international airport for instance, but will rather fly into Tamale International airport. As for the argument of the airport city, it is the biggest joke of the century and the least said about that the better. The only justification that has some credibility is the proposed use of the airport as a maintenance bay. Then again does that reason alone justify the investment? What revenues will that generate for Ghana? How many people will a maintenance bay of that nature employ? Do we even have the human resources to be engaged given that majority of the maintenance work done currently at Kotoka International Airport is done by expatriates?

Did the team that reviewed the proposal consider the weather conditions in the northern sector of the country in approving this project? Even current domestic airlines on occasions had to cancel flights because of the 'harmattan' conditions. What happens to international flights during severe harmattan weather conditions?

It is very difficult to know that this project went through parliament and was approved without parliamentarians on both sides of the political divide rejecting it. The Members of Parliament (MPs) from the Northern sector should have vehemently rejected the project in its current form and proposed other alternatives. This project will not benefit the vast majority of their constituents. It would be a lot better to upgrade facilities at the current airport so that domestic airlines can land and take off even in the night, than to spend $174 million to build an international airport.

Government and the people of the northern regions will be better served if part of the $174 million is used to upgrade the Tamale airport for domestic use, and the remaining amount invested in building roads and railways in the northern regions to enhance transportation of food and livestock from the north to the south of the country. We must learn lessons from the Tamale sport stadium and others that were built in 2008 and have since become white elephants, highly underutilized. Should we be building airports and stadiums that will serve less than 1% of the population or should we be building roads, boreholes, CHIPS centers, schools and agric extension posts that have direct impact on the majority of our people?

Our technocrats (politicians in disguise) must exhibit unbiased professionalism when advising governments. Governments on their part must consider the economic ramifications of projects they execute. Parliamentarians should not discuss project of this nature through their party lenses particularly at the committee level. Mother Ghana deserves better from its leaders

Covid-19: Some recovered victims having erectile dysfunction...
3 minutes ago