Child Poverty: Could It Be Solved? 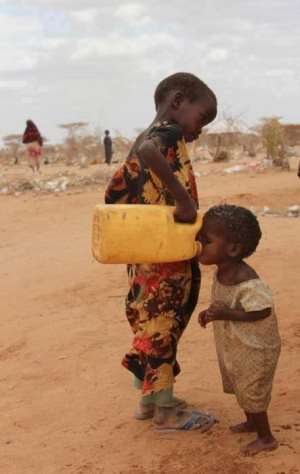 Child poverty as a topic, is of great interest to me simply because, firstly as a person I know there is always a problem where the basic necessities of life and Human being is concerned.

And as a Journalist who likes to collect, collate and report as the job demands, it makes it difficult seeing people enjoying while others suffer, arguably through no faults of theirs.

This article seeks to reveal the issues underlining child poverty, as one of the world's biggest problems of the day since time immemorial. The remedy is to start by digging its roots while finding a long lasting solution (s), if not a stabilize condition to them.

Hence, it is imperative for me to know Why, Which, How, When and What are the Causative Agents of Child Poverty.

Croydon College in the UK, last year emphatically celebrated Global Awareness Week of Child Poverty between the 4th to the 8th of February 2012, where the student UNICEF Steering Group promoted the international “IF” campaign, a collaborative drive involving more than 100 charities, to fight child poverty. Can Child Poverty Be Eradicated Through Campaigning As a Solution To The World's Fight Against It?

The “IF” campaign seeks to project four major questions, that need urgent and positive answers to addressing child poverty from the world's leaders and governments.

The questions were as follows,
(1) Why are there 1 in every 8 children leaving with the pain of hunger, if there is enough food in the world? The answer to this might be seen in the way some food are grown and distributed, which is unfair. For instance, some food crops are grown in the poorest part of the world and shipped to the richest countries.

(2) If a stop is put to poor farmers being forced off their lands, and use crops to feed humans instead of cars. An example is the production of biofuel.

(3) Why is enough aid not given to the world's poorest to feed, and stop children from dying of hunger?

(4) If the world's leaders and government stop big companies from dodging taxes.

Having analysed these aforementioned factors, moreover the onus still lies on the policies and implementations of each and every country to deliver her utmost best to achieve those answers.

However the multimillion biggest question of all time, remains to be answered. Is UNICEF, which is the world's leading campaigner of children and their welfare living up to its task? If not, is the world playing its part, to bringing the related issues connected with child poverty to a conclusion? The rectification of these factors is what the world is awaiting.

As we all know traditionally that, the basic necessity of life is food, clothing, and sheltering. Therefore, in a situation where one or all of these necessities are missing in action, that is when poverty creeps in. Conversely, poverty or child poverty is not a necessity of life, but consequently hinges on each and every human endeavour as a natural disaster to some extent.

Additionally, child poverty is a negative superlative in the genres of all poverties, even though it's not through their fault to be embedded in an environment or situation such as they face continuously. Child poverty will continue to exist due to factors such as politics and economics, technological, agricultural, environmental, industrial and social reasons.

For example:
Politics; because countries that share a common diplomatic fraternity, tend to trade among themselves much more than those who are not in any political relation with them. As well as how trade embargoes are placed on certain countries that produces certain food crops. This in effect, weakens the prospect of such a country to deliver the basic needs of her people, thereby contributing as a factor to child poverty.

For instance how a trade embargo was placed on countries like Zimbabwe in the southern part of Africa, due to the severed diplomatic relation between President Mugabe and the British government. Similarly to the strained Libyan-American relation of the late Libyan ruler, Mouamah Gaddafi.

Economics; due to the fact that nevertheless, not all of the countries in the world are rich, yet some countries do not put the necessary trade policies that would enhance their economy to function, viably to their advantage.

Technological; because not all countries are well and far advanced in the manufacturing and production of farm and agricultural machinery to accelerate the production of food crops.

Agricultural: because certain food crops cannot be planted in certain part of the world given the infertility of such lands. For example desert laded countries like Sudan, Mali, Somalia and Chad across Africa.

Environmental; due to the effects of environmental pollutions and draughts in some countries, they cannot produce certain food crops.

Industrial; because not all countries are highly industrious to meet the gross domestic necessities of their population. An example of such countries is Mali, Burkina Faso, Niger, Chad and others.

Social Reasons; Because Some Social Groups From Other Countries No Matter What, Do Not Believe In The Use Of Contraceptive As a Way Of Controlling Birth. Therefore, Individual Responsibility Needs To Be Seriously Considered When Tackling The Issues Of Child Poverty.

Nevertheless, the problems and burdens of child poverty should not be tagged along the crest of UNICEF alone, but also the F.A.O which is the world's Food and Agriculture Organization, whose premium duty and ambition it is, to defeat the world's hunger in whichever way.

In accordance with a UNICEF report dated 2012, they were on the ground across West Africa providing emergency food supplies and healthcare. They also treated over 250,000 children under five for severe acute malnutrition and vaccinated over 1.6 million children for measles, and made provision for mosquito nets to about 7.3 million families.

Despite these tremendous work by UNICEF across the world, child poverty still lingers on and has even confronted the most industrious of nations, such as the United Kingdom. The number of children living in poverty in the UK has shot to 2.3 million as one of the highest rate of child poverty to be recorded in the industrialised world.

So what and where is the world lacking and found wanting, can we solve the plaguing child poverty? To quote from the words of the director general of Food and Agricultural Organization Dr Jacque Diouf,

“We have the possibility to do it. We have the knowledge. "We have the resources. "And with the Rome declaration and the plan of action, we've shown that we have the will”.

He said this in 1974, at the world food summit in Rome. This conference was called to facilitate the global under- nutrition and the concern about the capacity of agriculture to sustain the growing populations of the world.

The attention and focus of the conference was the eradication of hunger, food shortages, and malnutrition within a decade. It is about two and a half decade now, and what do we still see? A mounting and growing case of malnutrition and Child Poverty all over the continents of the world.

They further estimated that unless progress was fast tracked the world's hungry population could rise up to 680 million by year 2010, of which sub-Saharan Africa will be hit the most.

Although So Many Reasons Contributed To The F. A .O'S Inability To Fulfil Its Promise To The World, They Were Able To Set a Political, Conceptual and Technical Blueprint For An Impending Effort To Eradicate Hunger.

Arguably, Educating The Individual As An Agenda, Must Be Added To The Basic Necessities Of Life To Ending Child Poverty.

BY YAW NKETIA: TOUCHING YOU FROM A DISTANCE, WHILE COLLECTING, COLLATING AND REPORTING AS JOURNALISM DEMANDS.