THE SUB-STANDARD RADIO JOURNALISM IN GHANA 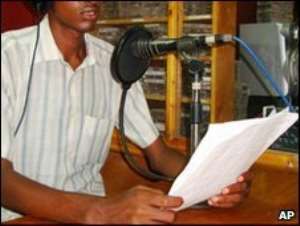 Establishing a radio station is not the actual issue. The main or major problem, although it does not come cheap and easy as far as the acquisition of the license is concerned, is the smooth running of the station. This might sound easy, but that is also where most get it wrong.

In addition to the aforementioned, there is also the purchase of the standard radio-studio equipments, while not forgetting another important aspect of them all..............the radius and distance of the station's coverage area.

Having said all these, they however still come arguably very cheap if not cheaper, in comparison to the running of the station: Employing, Recruiting, Staffing Administration and Poaching the real expertise who have the ultimate mantle and mandate to project the policies of the station's ideologies.

There is some sort of media-turbulence sweeping through the Ghanaian Airwaves as far as media employers (owners) and employees (radio presenters) are concerned. By the twinkle of an eye or before someone finishes changing their baby's Nappy, a radio presenter is either whisked to a different station or has terminated his contract, engagement or involvement with the station they were formally working for.

When it comes to soccer, the movers and shakers of the game are its skilful players. Likewise when it gets to radio and its various disciplines, the movers and shakers are its subsequent (qualified) presenters. Gone are the days when listeners used to only hear voices of (certified) radio presenters till they leave their posts by kind courtesy of old age or retirement.

Nowadays, most radio presenters are fond of chopping and changing stations just like footballers swapping shirts after a match. Although many factors play contributing parts to these kind of 'revolution'.

The main fact is...................(1) most of them are not getting paid at all. And those that are getting paid, are not being paid well enough to prevent them from getting 'handouts' from outside (NOKO FIOOO).

This is why you hear most of the presenters, start their radio shows by extending their numerous gratitudes to multitudes of people, in addition to 'mandatory' greetings and unwanted salutations before embarking on the day's work.

Fact number (2), their employers know most of them are not qualified to be there and for that matter deserve some loose change instead of the right payment.

Fact number (3) the presenters came by themselves instead of being signed or contracted by the said station (s).

Some are in the domain of radio broadcasting because they have the maximum experience through some sort of apprenticeship. But experience without the required certification cannot sit well with mainstream journalism.

Therefore the National Media Commission of Ghana should see to it that, all those who have acquired the art of radio knowledge through the local, dubious and ordinary concept should all seek for the right channel. They can do so by going back to the drawing board of not only a recognised media institution, but a reputable and credible one.

Apart from Ghana Broadcasting Corporation, who often and mostly train their On-Air presenters before hitting the Airwaves, there were other private radio stations that initially followed suit. But now it seems that tradition is long 'dead' just like the Hi-life music,I bet you did not hear that from me!

Who do you blame for these misfortunes that have befallen our beloved frequencies. Is it the National Media Commission or the making of the self-styled private media gurus? The blame should be laid on the carpet of the former than the latter.

This is due to the fact that, the powers that be, N.M.C, is the sole guardian in the supervision of the Airwaves in Ghana. And as such, has the authoritative stamp of approval and removal should in case of any abnormalities On-Air.

The whole centre-point of this issue, is for the N.M.C, to run a proper check of all those working in radio (broadcasting) to see if they have the necessary or pre- requisite certificates to handle the Airwaves. In so doing, listeners would enjoy the best out of the rest since the non-professional ones would have been weeded out.

Tune-in to most given radio stations in Ghana, from the north of the country to the south, in the mornings, and what do you hear? 'Politrickal' oh sorry political debates instead of sentimental,sensitive and other social issues overriding the nation.

So one would ask the almighty question, as to when and where it went wrong. Yes it all went wrong as soon as the media owners(paymasters) that be stopped seeking consultation from the right media connectives and professional personnel in the media industry.

Most radio stations do not look out for a credible and commissioned media consultant before embarking on their establishment, hence our stereos are choked with the same thing known in the Akan language as (Adikroment).

The influx of radio stations in Ghana has done it bit to inform, educate and entertain and to some extent shaped the society and still shaping them into all sorts of directions. But we should still not be forgetful of the fact that, the same privatisation of radio in Ghana has brought in its wake the proliferation of some unqualified and unprofessional radio presenters whose job is to tarnish the hard earned image and reputation of the few professional ones.

However as the adage goes, and as we all know that you cannot teach old dogs new tricks, much cannot be said about media houses like the Multi-Media, who controls Hitz, Adom, Asempa, Joy, Nhyira and Love FM as its platforms.

Aside of Multi-Media in Ghana, the Despite group of companies who also count Peace, Hello, Okay and lately Neat FM as its media Houses were those who took the lead in the threshold of radio in Ghana, and to some extent have lead the way since the allocation of frequencies begun.

The problem now, is the new ones joining the elite ones. The question is, are they joining to tow the line content-wise or they are coming On-air because they can challenge content-wise, be unique and proud to stand alone as far as the production of news and its dissemination is concerned. There is no point establishing a radio station just to do what the next station is doing content-wise.

In less than no time, Ghana would be flooded with radio stations enough to be apportioned each to a member of the public.

Okay enough said and written, let us wait and see which radio stations would be relegated at the end of the broadcasting year 2013.

Good luck to the newly promoted ones like XYZ, PRIME, PRAVDA,LIVE and some few others. I know by the time I finish writing this article, another radio station would be rearing its test-transmission mast on our faces and sounds in our ears.

Let us not forget that our brothers and sisters in the ink fraternity were doing it nice and decent before the arrival of mass radio journalism. So if anything we can learn one or two from them.

BY YAW NKETIA: TOUCHING YOU FROM A DISTANCE, WHILE COLLECTING, COLLATING AND REPORTING AS JOURNALISM DEMANDS