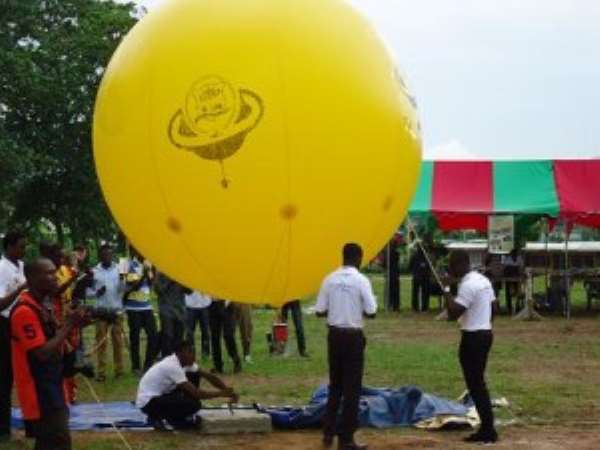 When the picture of Nana Kwaku Bonsam in a romantic pose with a black beauty was published on the front page of The Chronicle yesterday, many readers called wondering whether his new look would affect his powers. How could a man in the weird world of fetish fiefdom caress a beautiful woman, certainly a contender to any beauty contest anywhere? They keep wondering.

For the uninitiated, the beauty in question is Gertrude, a law student in London. She is the third wife of the extraordinary fetish priest who has lived in the Big Apple for the past one year.

Kwaku Bonsam is not your idea of the traditional fetish priest operating from a mud house with concoctions and amulets for company. After one year of residing in New York, certainly the most cosmopolitan of residential areas in the world, the charismatic fetish priest, born Stephen Osei Mensah at Afrancho, in the Ashanti Region, arrived at the Kotoka International Airport in Accra on Monday, a completely changed person.

The burnt face, inflicted by a gas explosion in his native village in 1992, aged 19, has given way to a cowboy look with an American baseball shirt without the cap. His face has taken on a new look, thanks to intensive plastic surgery at Harlem Hospital Centre.

With his new look, and the way he is being sought after, Nana Kwaku Bonsam, born 39 years ago at Afrancho, a farming village tagged on the Kumasi-Offinso Road, is the latest pop star in town. Like footballers and film stars, Kwaku Bonsam attracts attention the way roses are patronised by bees.

In New York, Kwaku Bonsam was introduced to Mayors and other celebrities. The celebrated broad sheet New York Times ran a feature on Kwaku Bonsam's extraordinary feat as a fetish priest in America.

http://thechronicle.com.gh/wp-content/uploads/2013/08/Kwaku-Bonsam-1.jpg The story is told that Kwaku Bonsam arrived in New York last August at the time the whole nation of Ghana was mourning the departure of the then sitting President, John Evans Atta Mills, to visit a friend from Guinea. He extended his stay 'after his facial injuries became infected, requiring a number of operations at the Harlem Hospital Centre,' according to the New York Times.

When radio D.J. Prince Adomako received a phone call in April from a man identifying himself as Nana Kwaku Bonsam, he hung up immediately terrified, states a feature in New York Times. According to the article, the man kept calling back from the same line, then from a series of new numbers.

'I got really scared. Nana is a famous fetish priest in Ghana. I thought he might want to put a curse on me,' stated Adomako, 21, who was to become the focal point in promoting the fetish priest in both the Ghanaian community in Uncle Sam and the American society.

Explaining why Kwaku Bonsam had adopted modern technology to promote the African traditional religion, the New York Times wrote: 'In West Africa, traditional priests, often called fetish priests, have historically preferred secrecy and seclusion to carry out their ancient rituals inside mud huts in remote areas.  And since 1992, when a democratic constitution was approved in Ghana, traditional religion has come under increasing attack from a new generation of Pentecostal pastors, who use television, radio and the Internet to deride its rituals as devil worship.'

According to the paper, Kwaku Bonsam has adopted the same methods to promote traditional religion. 'His outsized persona and cosmopolitan credentials make the case that the old spiritual practices are compatible with being a modern African,' the paper stated.

Brigit Meyer, Professor of Religious Studies at Utrech University in the Holland, who has conducted research in Ghana for 25 years, and has written extensively on Kwaku Bonsam, said: 'By using Facebook and You Tube, and finally residing in New York City, Mr. Kwaku Bonsam shows that traditional religion can go global. He's making it fashionable, in other words.'

The paper said Kwaku Bonsam was all over the place in New York. 'He's everywhere in Bronx now,' the paper quoted Daniella Asantewaa, 25, a Ghanaian advertising executive, living in the borough. 'You go to a funeral, you see him; a birthday party, he's there.'

Kwaku Bonsam was consulted by all manner of people.  Ghanaians, Ivorians and Senegalese with immigration problems consulted with him in their endeavour to improve on their residential status.

On Sundays especially, Kwaku Bonsam's one-bed apartment in Bronx sees a bee-hive of activities. 'In one corner of a glass coffee table was obscured the elements of a makeshift shrine: a chalice filled with Johnson's Baby Powder, a bottle of J.H. Henkes' Aromatic Schiedam Schnapps, a horse-tail whip, a Master Lock wrapped in red twine. In another, an Ikea desk supported two Dell computer monitors and a broadcast microphone.  In the middle sat Mr. Kwaku Bonsam, dressed in a rainbow-coloured smock, stirring a brown liquid in a plastic kitchen bowl,' reported the paper.

'This is African medicine,' Kwaku Bonsam explained, describing the concoction - prescribed to male clients experiencing sexual weakness - as a mixture of honey, vodka, tree bark, and herbs he had requested from his assistants back home in Ghana.  Western medicine has a lot of side effects. But, with this, there are no side effects.'

A Ghanaian cab driver and his friend, both in their 50s, sat by each other in the room, according to the newspaper, observing Kwaku Bonsam. 'We came to America for Martin Luther King's dream,' Nyarko told the newspaper. 'But New York is very, very expensive. There is so much stress here.'

His friend, identified as Kito Aikins, added:  Nana helps people spiritually, in ways that pastors cannot. Another Ghanaian, 20 year-old Lewis Lidfeldt, living in Sweden, flew half way across the globe to seek advice on how to become a successful recording artiste. I heard Nana has a lot of experience with the spirit.'

Nana Acheampong-Tieku, an accountant who is head of the local Asante community, said Kwaku Bonsam's popularity in Ghana had made Ghanaian Christian pastors in America nervous. 'They think he is stealing their members and their revenue.'

When Mr. Acheampong named a controversial pastor in Virginia who had openly criticised Kwaku Bonsam, the fetish priest responded by asking the aggrieved pastor to read Jeremiah 23:16. 'Do not listen to what prophets are prophesying to you: they will fill you with false hope.'

During his one year stay in America, Kwaku Bonsam has improved on his English language. He lectured students of a high school on African traditional religion, and was a constant feature in events involving the Ghanaian and African communities.

On his arrival at the Kotoka International Airport in Accra on Monday, the fetish priest declared: 'I am back with authentic Akom  a message obviously directed at his large local clients who have missed his services for one year.

He told The Chronicle yesterday that he chose to be educated in the Queen's language in America, and now speaks English fluently. In his opinion, he is now well equipped to perform more miracles and aid his large growing clientele.

Kwaku Bonsam claims to be the source of the powers of some charismatic priests who are performing miracles before large congregations. On April 2, 2008, he led policemen to re-claim a god he had given to a pastor at Berekum, in the presence of members of his congregation.

On his website, Nana Kwaku Bonsam has posted this message: 'Life is all about destiny. Discover yours. Nana Bonsam is ready to help. Be it spiritual guidance, business, marriage problems or want revenge. A lot of people have obtained help from me both locally and international. Evaluate your life, if there exist a problem, then E-mail me.'

The website continues: 'Do not be like the cat who wanted a fish, but was afraid to get his paws wet,' quoting William Shakespeare. 'Our lives are filled with 'moments.' How we recognise and deal with these moments determine the present and the future we will experience. From birth we are given a free will. There is a destination for our lives which will bring us happiness and inner peace.'

In the words of Kwaku Bonsam, daily decisions taken by every human being is like a map. 'If you make the right turns, you will reach your destination easily. If you make a wrong turn, you will become lost. And if you are lost, what you have to do is to stop at a junction and ask for direction. That is what Nana Kwaku Bonsam is there for… I am a direction to your personal destination. I have brought healing, prosperity, support, protection and justice to many people.'

I lived throughout my primary education at the Ekumfi Ekrawfo Ahmadiyya School with the brother of my father. Papa Kuma Kofi Otsiwa was a fetish priest, who was consulted by all manner of people. For a considerable period, I slept with his gods. I do not remember seeing anything or feeling anything. The explanation was that the gods saw me as their son and protected me.