Gnani: A Witch Camp and its Wizards in Ghana 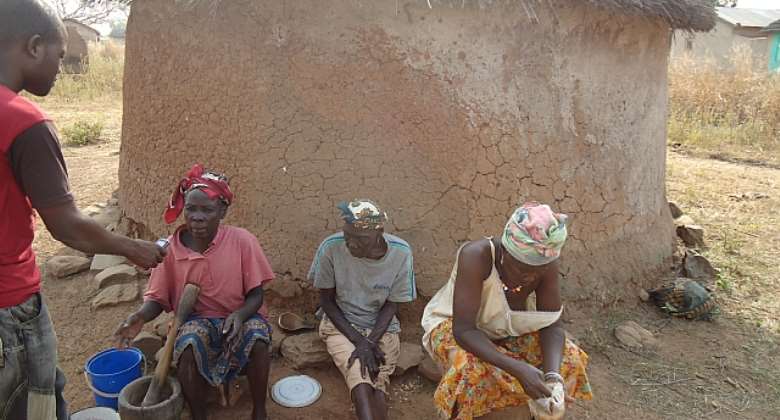 Gnani is another village in the northern region of Ghana that welcomes 'alleged witches'. It is one of those safe spaces where people fleeing their communities due to witchcraft persecution can go and find refuge. In Gnani, alleged witches are allocated a particular section of the village where they reside. Still they move and interact freely with other members of the community. They are not stigmatized as evil. They are not discriminated against or treated as outcasts.The local priest, Tindana, carries out a ritual of purification and of disabling of alleged powers of 'witch' on arrival, as part of the rehabilitation process.

Like their counterparts in Kukuo, the alleged witches survive by farming and selling fire wood. But some of them are too old to farm and cannot engage in any labor. They survive by begging, and they face really an uncertain future. The inmates of Gnani camp fled their communities following accusations of betwitching somebody- of killing some one or making somebody sick through magic or witchcraft. Wumbi(70), a muslim, was accused by the uncle, Mohammed, of killing his son through spiritual means. Awaabu was alleged to be responsible for the death of a member of her community. A local mob threatened to lynch her and burn down her house. The husband's brother conveyed her on a bicycle to Yendi and from there she found her way to Gnani camp.

The inmates have pathetic stories of incredible accusation, abuse, torture and maltreatment that left them with no other choice but to leave-to flee their homes and communities. So they all fled or were forced to flee to avoid being murdered. Now they have made the camp their 'new home'.

One distinctive feature of the Gnani camp is that it has male inmates. Infact it is the only witch camp in the northern region of Ghana that has 'wizards'. Like their female counterparts, the 'wizards were accused of causing death or diseases through malevolent magic. One of the 'wizards', Kareem Mahama is around 80 years. He has been in the camp for 2 years. A boy in his village claimed he saw Kareem in his dream. That Kareem was jumping on him in the dream. And locally this tantamounts to witchcraft.

A local mob threatened to kill Kareem and he fled to the camp. Kareem has no plans of going back because he fears for his safety. In northern Ghana, most people take their dreams seriously. They understand and interprete their dreams in ways that fuel witchcraft accusation. Witch craze in this region is drived partly by dream epidemic. Infact, anyone who is seen in a dream is often regarded as a witch or wizard. Anyone seen in a dream is taken to be involved in the occult business.

Another alleged wizard, Gbafo, was driven out of his community in Bakpaba following an allegation of witchcraft. He arrived the camp on December 10, 2012 leaving behind his family members. The members of his community told him not to return. So he is most likely to spend the rest of his life in Gnani. In the northern region of Ghana, witchcraft accusation causes people to be uprooted from their homes and to embark on a journey- a journey of no return.

The belief in witchcraft has a female as well as a male face. Both sexes are targeted and accused, though most of those who are accused, drived out and forced to live in camps and make shift shelters are women- old ladies. The witches and wizards come from very poor backgrounds in rural part of northern Ghana. The alleged witches and wizards are mostly un educated. The women are mostly widows or from polygamous homes. Witchcraft accusation is often a weapon for the elimination or of getting rid of those are hated or are unwanted in a family or community.

Any effort to address this problem should take into consideration these social factors and conditions.