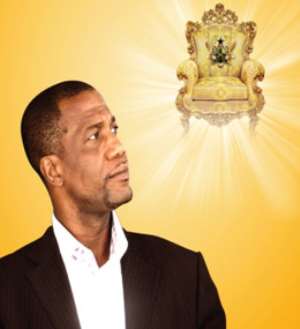 I came across this phrase “Ghana at crossroads” when by premonition I visited the Action Chapel International, one evening in 2009, during their yearly programme christened “Impact 2009”.

This phrase was repeated several times by the former President JJ Rawlings when he shortly addressed the congregation before the main Preacher. He decried how CORRUPT leadership forms, political, religious, business and traditional are capitalising on the ignorance of their respective ideological, captive, contract and cultural followers by using the power of the media, religion, and state institutions in particular to amass wealth for themselves at the detriment of the rest in society. Former President Rawlings was cautionary emphatic on how abysmal political leadership and weak state institution can have the high tendencies of destabilising Ghana during the fourth republican constitutional governance.

The Archbishop Duncan Williams repeated a prophetic word believed to have been uttered by the late Evangelist Amoako, of Resurrection Power Chapel that, “former President JJ Rawlings will be a preacher of the gospel of Christ” and the Archbishop prayed for the former first couple and family.

The utterances from key personalities in the political, Religious, Business and Traditional leadership forms have been the cause of state apprehension by many a well meaning Ghanaians since 2009. Moreover, events perpetrated such as foot soldiers phenomenon, bye-elections violence and those corruptions perceived to have been committed by organised conspiracy of the political system, judicial system, state institutions and 2012 December general elections are culminating pointers defining the crossroads of Ghana's democratic experimentation.

Ghana at crossroads by implication meant that Ghana has reached a very important and uncertain stage in its destined life. But what aspect of Ghana's destined life does it find this crossroads? Ghana as at 26th December 2012 finds itself at the crossroads of making an important choice of deepening its democracy and the uncertainty of possibly destabilising the country through political injustices.

The phenomenon of self-organisation rallied by Individuals, groups and institutions with concerted efforts to denounce all forms of electoral violence in 2012 general elections ensured the comparatively peaceful nature to all the 4th Republic elections since 1992.  The most outstanding effort was the Kumasi Peace Declaration by the eight (8) presidential aspirants in the 2012 election organised by his Majesty Otumfo Osei Tutu II, the Asantehene and IDEG at KNUST.

Though political parties' leaders have been bad losers of elections and have mostly resorted to violence in seeking redress thereby destabilising countries on the Africa continent, the New Patriotic Party (NPP) however, has refused to concede defeat of the 2012 presidential election, citing evidential acts of fraud in favour of the ruling national Democratic Congress (NDC) party by some EC officials and has therefore decided to contest the declaration by the chairman of the EC at the Supreme Court.

The other six (6) presidential candidates have conceded defeat and congratulated the president elect, John Dramani Mahama for the sake of constitutionalism, electoral procedures, peace declaration and more probably knowing that some of them do not have any evidence or if they even have any evidence the materiality to overturn the already declared results by the EC or impart on our electoral systems will be marginal.

Some have criticized the NPP to contest the Presidential results citing the fact that for our majoritarian democracy in parliament and with the NDC winning majority of seats it will be very difficult and if not near impossible for the government of the NPP, led by Nana Akufo Addo to rule the nation effectively. Others have also criticized the NPP due to the uncertainty at the crossroads to accept the results and allow sleeping dogs to lie. Nonetheless, Ghana has no choice but to go through the crossroads of “Akufoaddection” which is a process of contesting electoral results with the view to not  necessarily over turning the already declared results and not causing electoral violence but to follow the due process of the law  and to deepened the democracy in a country”.

The positive ramifications of akufoaddection are firstly to enable Ghana move from accepting mediocre election results and redefining the constitutional accountability of the EC responsibilities. Secondly, it can mitigate voter apathy in subsequent elections due to perceived conspiracy by pooling agents to rob votes. Thirdly, it will disincentivise wilful electoral rigging. The only danger confronting the nation is due to ignorance by the masses to decipher the orientation of political actors and drifting politicians. The cautionary words of Frederick Douglas, an American Reformer and statesman, is more appropriate at this crossroads, that “Where justice is denied, where poverty is enforced, where ignorance prevails, and where any one class is made to feel that society is an organized conspiracy to oppress, rob and degrade them, neither persons nor properties will be safe”.  The Supreme Court (SC) cannot deny justice and cannot be fair to the whole country at this crossroads of Ghana's destiny. The death of the three (3) SC judges and colleagues should not be in vain to justify why they need to celebrate them every 30th June.  Ghana prays for divine wisdom, guidance and courage to emulate the righteous application of the spirit of justice defined by former president of South Africa, Nelson Mandela.

If as individuals, groups and institutions we cannot face the shadows of our past deeds courageously and legally, can we then conclude that we as Ghanaians are mostly corrupt and distrustful?

The office of JOY2012 is of the view that, akufoaddection is a national issue which beacons at the door step of the EC, the complainant (the NPP) and the SC with all Ghanaians as interested parties of the outcome. It is neither an issue of the NPP verses the NDC parties nor their supporters only. The NDC is not yet complicit in the electoral fraud by the EC unless otherwise proven at the court. No political parties' agents can be held accountable for fraudulent figures by their presence or absence except EC's presiding agents at the pooling stations, who have the final say. The NDC though is seen as the beneficiary, they have no business except being called upon by the Supreme Court to substantiate or refute the evidence as witness.

Electoral fraud is the act of subverting and subjugating the sovereignty residing in qualified people of Ghana to vote and from whom the Government formed derives all its powers and authority through the constitution.  Electoral fraud can ONLY be committed by EC officials and NO and I say no political party can do that without connivance of EC officials. Officials of EC committing electoral fraud with the backing of the power of constitutional mandate is tantamount to military adventurists staging coup d'état with the power at the barrel of the gun. Both acts are treasonable punishable by death.

If the NPP's evidence is validated by the SC, the Presiding agents of all such pooling stations should be charged with treasonable offence.

What is the way forward for subsequent elections;

The office of JOY2012 would like to congratulate the leaders and supporters of both the NPP and NDC for respectively mitigated the effects of depression by their defeated supporters and moderately celebrated the victory by their supporters.

The office of JOY2012 advices that let us all understand the qualities required for successful elections and participation by contestants. The spirit of election is the well-being of the citizenry and not an individual becoming a president or a party securing more parliamentary seats. The WILL to win an election is to give Ghana the opportunity to unite and to develop itself. The WILL to excel in an election is to deepen democracy by having the opportunity to correct past mistakes for the future generation. These are more important qualities for JOY2012 contesting in election 2012 than the one day event of voting on 7 December. The office does not support NDC victory NOR NPP litigation. The office supports rather the spirit of election as stated above, respect for the rule of law and constitutionalism and the application of laid down electoral process for Ghana.

As Ghana “akufaddectes” through the SC, all political actors should be involved with the qualities of statesmanship being mindful of the ramifications of comments from drifting politicians. The Justice system in our country will be tested by the process of akufoaddection but we all need to exercise restraint and be dispassionate about the elections results. It is not yet over until it is over with the SC verdict for once again Ghana to be accepted to have matured past the Ivorian and Kenyan experiences as all gazes the occupant of the seat of government by the SC.

To conclude by quoting Jacob osei Yeboah, the only Independent Presidential Canditate in Ghana's Presidential election 2012,in a book page 96, entitled 'the next President of Ghana' by using South Africa's example and righteous application of Justice by former president Mandela opined that “Therefore any cry for justice that will not lead to hope, peace and development for the future generations never deserves our dignified attention; they should be understood as egoistic and self-glorification of protagonists and the wasting of valuable resources of humanity”.

Once again thank you one and all. God Bless Ghana and God Bless JOY2012.