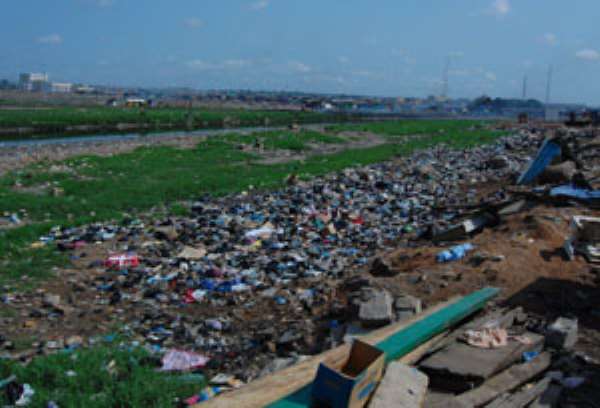 Chief Yahaya Mahama shakes his head and refuses to talk about the disposal of waste in his community; Sodom and Gomorrah, the notoriously grimy slum in Accra.

'I don't want to talk about it,' he says.
The Dagomba youth chief says he is overwhelmed by the herculean task of having to manage the waste generated by the over 90,000 people living in the community he has ruled for over 10 years.

Sodom and Gomorrah, otherwise known as Old Fadama, is located at the heart of the capital city and along the catchment area of the Korle Lagoon, one of Accra's most polluted wetlands.

Old Fadama was created by people who came from the northern part of Ghana (mostly from the three northern regions; Upper East, West, and Northern region itself) to seek 'greener pastures' in the capital city.

Sodom and Gomorrah, aptly named after the Biblical city of iniquity, is a noted slum on the verge of extinction, as authorities say activities of its residents are hindering government's intention to restore the vitality of the Korle Lagoon.

Experts at the Environmental Protection Agency (EPA) have declared the lagoon virtually dead, since it can no longer clean itself of the effluent discharge from the highly populated residents on its banks.

In a bid to restore the dignity of the ailing lagoon, the Korle Lagoon Ecological Restoration project (KLERP) was initiated. The project aims at dredging the lagoon and then converting the areas around its bank into a recreational area.

Some of the demolished structures
However work on the project has halted, with authorities attributing the stoppage to continued pollution of the lagoon by residents of Sodom and Gomorrah.

The question that quickly comes to mind is why would the lagoon, which otherwise would have been a scenic landscape that would support socio-economic activities in the metropolis, be left to its fate as it continuously receives uncontrolled discharges of domestic and industrial waste as well as raw sewage?

Machinery meant for the project have been virtually left to rot due to non-usage. Indeed, the restoration programme is in ruins and is currently at the mercy of grazing cows and the weather.

The Korle Lagoon
The Korle Lagoon is a coastal wetland comprising beautiful sand dunes, open lagoon, salt pans, marsh and scrubs, which provide extensive suitable feeding, roosting and nesting grounds for various species of seabirds and it used to be a haven for bird-watchers.

Located in the south-west of the central business district of Accra, it is the major basin into which the greater proportion of the floodwaters from metropolitan Accra flows before finally entering the sea.

The major inlets into the lagoon are the Odaw River with its major tributary, River Onyasia, which drains the northern parts of Accra including Haatso, Papao and Agbogba.

Wetlands like the erstwhile Korle Lagoon plays a major role in improving the quality of water, as it removes sediments, nutrients, toxic substances and other pollutants in surface run-off.

It also acts as a habitat for high concentrations of birds, mammals, reptiles, amphibians, fish and other species. The lagoon basically facilitates the movement of large volumes of water into the underground aquifer, resulting in recharging of the water table underneath the Accra metropolis.

Pollution
The catchment area of the Odaw River is densely populated and has a large concentration of industries including Ghana Breweries Limited, several textile factories and vehicle repair workshops.

George Awudi, Programmes Coordinator of Friends of the Earth, a non-governmental advocacy organization aimed at influencing policies for creating a sustainable utilization of natural resources, says the country's economic recovery program has contributed to the pollution of the Korle Lagoon.

'There is increase in industrialization; meaning the use and release of water,' he says.

According to him, the waste water (effluence) from the surrounding industries is not properly treated and can therefore not guarantee the ineffectiveness of the waste into the lagoon.

However, the EPA claims the effluence discharged from industries located along the lagoon is not the cause of the pollution of the coastal wetland; rather the environmental regulator places the blame squarely on the laps of residents in the area.

Angelina Mensah, Director of Public Affairs at the Agency says the EPA is carrying out its mandate of issuing permits and monitoring the discharge of waste of those industries effectively and that, 'the pollution is not from the effluent discharged by the industries into the lagoon'.

According to her, the major cause of pollution is the disposal of liquid and solid waste into the lagoon by those living in the catchment area.

The slum community, Old Fadama, which many prefer to call Sodom and Gomorrah, is being accused of polluting the Korle Lagoon; however community leaders say they cannot be blamed for the pollution of the lagoon.

Alhaji Abdullah Sulemana is the Chairman of the Development Association of Old Fadama, and he says the existence of the community does not in any way affect the lagoon.

'I don't think our stay here is affecting the work of the lagoon,' he reiterates.

Instead, he says the community has complied with directives from city authorities- the Accra Metropolitan Assembly (AMA)- but nothing is being done to restore the lagoon to its former state.

He nonetheless admits that the community has a sanitation problem and insists the disposing of waste is 'very, very challenging'.

Residents therefore find their own means of disposing both liquid and solid waste. This is usually done in the open, and it finds its way into the lagoon.

Chief Mahama also admits the community has a waste disposal problem but shows concern about the failed promises made by successive governments and organizations in solving the problem.

'People come and talk but we don't see any change,' he laments.

However, Abdullah says the residents are not affected by the lagoon and that floods which occur during the rainy season does not affect them.

'We have not been affected by the lagoon,' he says.

Interventions
The EPA says it is working with stakeholders to ensure the environment is protected. As part of efforts to ensure compliance of the terms of waste disposal, the Agency says a rating dubbed 'AKOBEN' has been established to name and shame industries who flout its regulations.

'If a company rates green in other ratings but gets red which means incompliance in the discharge of effluent, that company has failed,' Mensah says.

She says the results of the ratings are published and those who default lose their international market.

Awudi thinks the country has lost the battle but believes the situation can change for the better if awareness is created. He also calls for sanitation laws to be enforced at the community level.

'People must know where they are, what they are doing and the effect their activity is having on the lagoon,' he emphasizes whilst urging that government must distinguish between what is politically motivated and humanly right.

Abdullah claims the community has had several meetings with the city authorities on how best to protect the lagoon from further pollution.

He says the community in showing their commitment to the restoration project of the lagoon, has granted the 50 meter distance ordered by the city authorities by voluntarily demolishing structures within that radius.

Though the authorities have indicated a restoration of the project, which has virtually been abandoned, Abdullah says the community is doing its own part in helping to restore sanity in Sodom and Gomorrah.

'All we do is to appeal to our mothers and fathers to take care of their children and as for food vendors, we advice them to be careful,' Abdullah says.