Nana To Fight Woyome With The “Anas Principle.” 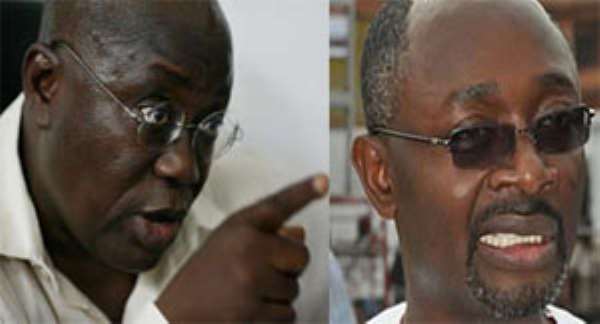 As the guardian of the house called Ghana, President Mills seems to think that the arrest of the thief who stole the family jewels is good enough. Since the arrest, the president has not proposed any reforms or ideas to reinforce the security of the house.

No iron bars on the windows or security alarms or restructuring of the “watchmen” have been put forward.

So it was very refreshing to hear that Nana Addo Dankwa Akufo-Addo had recognized that the arrest of Woyome was simply not good enough; and that comprehensive reforms and new measures are needed if the country intends to seriously fight corruption and prevent the occurrences of theft of such magnitude.

Speaking at a town hall meeting with the Ghanaian community in Houston, Texas USA, a fortnight ago, Nana announced that his administration would institutionalize what would be known as the “Anas Principle' to create 'a new culture of fear for corrupt practices.”

As Nana further explained, the intention is “to establish a special anti-corruption squad, made up of some of our best young talents, well-trained, well-paid, well-disciplined, with the license to root out corruption from every nook and cranny of our public life.”

Nana's proposal in is line with NPP's absolute commitment to fight corruption.

When it assumed office in 2001, the NPP under president Kufuor came to the realization, that after 20 years of the PNDC/P-ndc misrule, the system had become an enabling ground for corruption. As reforms, the Financial Administration Act, the Financial Management Act and the Public Procurement Act were introduced backed by public hearings of the Public Accounts Committee of parliament among others.

But in the wake of Woyome, it has become very clear that the system is still seriously flawed. A police man taking a GHc2 bribe at a check point is one thing. But an Austrian Counsel, a party financier and chairman of multiple State boards duping the nation out of hundreds of millions of dollars is a whole different matter.

An “unprecedented” restructuring of the whole system is needed. Yet Mills has not shown any inclination to reforms. What is most shocking is that the president has treated the Woyome case as if it were a simple pick pocket caught at Kajetia- not even a hint in his State of the Union address or since.

In fact since Mills took over, the only proactive thing he has done, in terms of corruption, was to change the name “Serious Fraud Office (SFO)” to EOCO. Thus Nana's “Anas Principle” is a welcoming call. Backed by Bawumia's Fiscal Responsibility Act, more loopholes would be plugged in the system.

The “principle” is so named in honor of the award winning investigative journalist, Anas Aremeyaw Anas. Over the years, Anas has gone undercover numerous times to expose the corruption in our system. Perhaps, the most famous case was the expose` on the cocoa smuggling rings along the Western border which led to the suspension of the licenses of three cocoa purchasing companies.

Of the latter, Amajaro UK, would later get its license reinstated after a coincidental dinner involving a company official and vice president John Mahama in London – as reported in the UK press. The CEPS officers involved in smuggling case were subsequently led go when government miraculously failed to present witnesses in court.

Indeed, Mills' lackadaisical attitude towards corruption, obviously inspired by the philosophy of a president 'is not a police man,' is very dangerous for our country and development. And there is no doubt that when the 'Anas Principle's' dragnet is cast under Nana's administration, many -from Betty Mould to Duffour to 'Atlas' Ayariga to J.D Mahama to CP to Waterville- would be caught in it.

For as Nana said at the town hall meeting, 'I will introduce stiffer punishments for corruption to make the theft of state funds more expensive for the criminal than the stealing of a goat.'