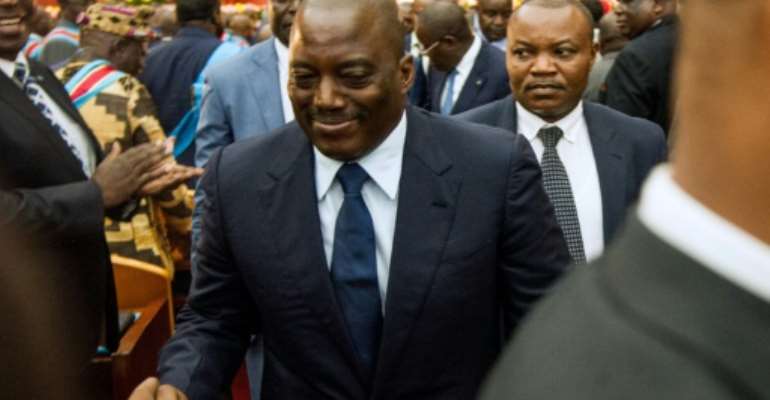 Kinshasa (AFP) - Still relatively young after 16 years leading the Democratic Republic of Congo, Joseph Kabila is a secretive president at the centre of a political crisis in his vast, conflict-ravaged nation.

Tuesday marks the end of the second and constitutionally-mandated final term for the 45-year-old, who inherited the presidency after the 2001 assassination of his father.

But he has shown no intention of stepping aside from the job that he began without much fanfare.

"With his timid voice and youth, he gave the impression at the start of being bland," wrote Belgian historian David Van Reybrouck in a landmark book on the country.

It all started so abruptly: DR Congo was riven by "Africa's Great War", in which up to five million people would die, when Kabila's father -- longtime rebel commander and president Laurent Kabila -- was killed by a bodyguard.

His son, then a general, was summoned to take up the reins of the nation, and on January 26, 2001, aged just 29, was sworn in as Africa's youngest leader.

The young man spoke English and Swahili, but had trouble in French -- the country's official language -- and a poor knowledge of lingala, spoken in the capital Kinshasa.

His linguistic shortcomings, his birth in the east of the country and childhood in Tanzania left him appearing to many in Kinshasa a "man of the east" or even simply "a foreigner".

That image was not helped by his small stature as well as a fine and always impeccably trimmed moustache.

Meanwhile, Kabila and his family in the Democratic Republic of Congo have created a personal economic empire worth hundreds of millions of dollars, the Bloomberg News agency reported Thursday.

But taking charge of a country half the size of western Europe, plagued by the worst war in modern African history and weakened by decades of ineffective governance, Kabila embraced international moves to end the conflicts that had brought at least six foreign armies onto Congolese soil since 1998.

Alongside deals for the withdrawal of foreign troops, an agreement was signed in December 2002 among rival Congolese parties that launched a transition process towards democracy in the former Belgian colony, once known as Zaire. 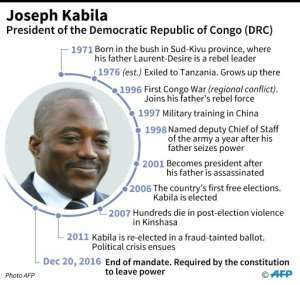 But while a large UN mission helped prepare for free elections, the outgoing British ambassador, James Atkinson, alleged in a leaked 2004 diplomatic cable that "Kabila is surrounded by hardliners using him as a front...(and) serves the interests of those who (probably) killed his father."

A series of peace accords kept Kabila in power until he was voted into office in the 2006 general election -- the country's first free ballot in 41 years.

Kabila was born on June 4, 1971 in the Fizi territory of South Kivu province in the east of the country, where his father based his rebellion to topple dictator Mobutu Sese Seko.

When the family was pursued by Mobutu's forces, the young Joseph went into exile in Tanzania at the age of five, and in 1996 took part in his father's Rwandan-backed military offensive against Mobutu.

After his father took power, Kabila was sent to China for further military training, but was called home after a new rebellion backed by Rwanda and Uganda broke out in 1998. He was given the rank of general.

Since assuming the presidency after his father's death, Kabila has proved a stern and steely leader, but he seldom seems at ease during official events.

Both his presidential election victories, in 2006 and 2011, led to unrest and cries of electoral fraud, and foes have also accused him of running a "parallel government" -- allegations his many supporters refute.

During his decade and a half in power Kabila has cultivated an air of mystery about himself. In rare interviews, he comes across as a soft-spoken leader who modestly tries to govern a war-scarred and under-developed state.

"He has an introverted personality, he's disciplined and he loves discretion," according to a member of his inner circle.

Rebutting charges that he has given foreign mining firms juicy contracts to exploit vast mineral resources at the cost of stable development plans, Kabila insists he has acted for the good of Congo's 70 million people, who were bled dry during the 1965-97 reign of Mobutu.

Kabila, an Anglican, is married to Marie Olive Lembe Kabila, and they have a 16-year-old daughter Sifa, and a son Laurent-Desire Junior, aged eight.