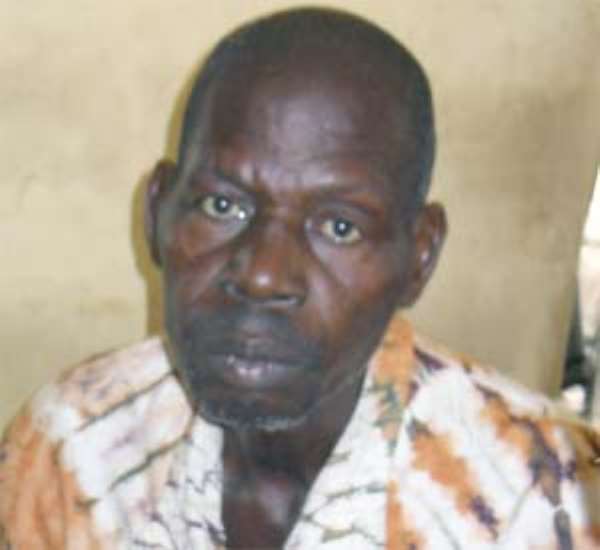 A 75-YEAR-OLD farmer, Kweku Adjei, who resides at Humakyem, a village near Obuasi in the Ashanti region, yesterday broke down in tears after an Obuasi Circuit Court sentenced him to 10 years' imprisonment for defiling a six-year-old girl in the farming community.

Harbouring the intention to engage in the unlawfully lewd act, the convict reportedly called the girl into his house and treated her with a good meal, after which he had sexual intercourse with the youngster.

'My lord, I've committed a great sin; please forgive me,' the paedophile pleaded with the court presided over by Gilbert Ayisi Addo to deal leniently with him, amidst tears.

He pleaded guilty to the charge of defilement, contrary to section 101 of the Criminal Act of 29/60, and was sentenced accordingly after the judge had taken into consideration his age.

Before passing the sentence, Judge Ayisi Addo asked the accused, 'But you why, can't this girl pass for your great granddaughter?' as he shook his head in disbelief.

The prosecutor, Police Inspector Albert Anani, said the complainant, Jacobel Owusu, was a farmer who lived with her daughter, the six-year-old victim, at Humakyem, a village near Obuasi.

According to him, on April 24, 2011, at about 9am, the victim and two boys between the ages of seven and 10 were playing on the convict's compound.

According to the prosecution, the 75-year-old man called the three and asked them to fetch him water from a place nearby.

Opanin Kweku Adjei, affectionately known as Sika Papa in the community, thereafter treated the kids to a nice meal he had prepared.

Inspector Anani noted that the convict later asked the two boys to leave since he (Adjei) wanted to send the victim on a special mission, and therefore gave them GH¢1 each.

The boys left the place, leaving the victim behind, and no sooner did the convict undress the six-year-old primary-one girl, lay her on the bare floor and began having sexual intercourse with her, prosecution stated.

One of the boys who was suspicious of the man's behaviour, tip-toed to the convict's doorstep and peeped through a hole at the side of the door and discovered that the old man was on top of the girl, having sex with her.

The boy quickly ran back to inform the complainant. The convict immediately redressed the girl and gave her GH¢1 to go home, after realizing he had been caught.

The victim later informed her parents, who subsequently lodged a complaint with the police, leading to Kweku Adjei's arrest and prosecution.