Vandalism Is All Sizzle, No Beef 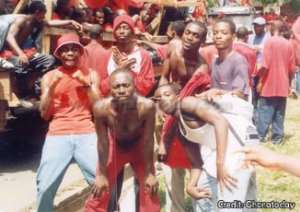 Well, sometimes Vandalism is all beef and no sizzle at all, depending on what sits well with the spirits. Once the atmosphere is right, the opera of Vandalism is as melodious as the poetry of its practice. That is what it means to have an only male hall of residence that sits atop a hill in the premier university of the first independent country in Africa. When they gather together in red, touring their colonies and chanting their corrupted versions of Ghanaian gospel songs, and sometimes South African tunes, they do so only as Vandals. But theirs is an acronym; it has nothing to do with unruly behaviour or destruction. They seldom 'charge,' but when they do, they are often heard everywhere: both in the colonies on their campus and even in their offshore colonies in Kumasi and Cape Coast.

That, apparently, is what is causing their present predicament: The Vandals were said to have charged on the wrong side of their mouths in the presence of our finest statesman, Kofi Annan and other important dignitaries in the country. Such impudence, not in the presence of a Busumuru! Their punishment is a very interesting one: The University has decided to add some beautiful ladies to share their Vandal city with them. This has engaged the entire nation for weeks, and now the Vandals are going to court, to seek an injunction. And they are ably represented by a good lawyer who is in very good standing.

Some people think the Vandals are pushing it too far, and the entire 23 million of us shouldn't waste our time discussing what in other jurisdictions could be a unilateral decision by the political head of the university, in consultation with the Dean of Students and the Hall Master of Commonwealth Hall. Mr Tweneboah Appiah Kusi, a chartered accountant in the United States, leaves a message on his Facebook: “Why should the decision of a university to convert an all male hall of residence into a mixed hall engage the attention of an entire nation for more than two weeks?” Tweneboah receives more than 17 messages, some applauding him for pricking the national conscience on what should constitute our priorities, while others, the Vandals, as usual, charged on him and ponded the CapeVars alumnus in a sea of invectives. Somewhere in the chain of messages, a former chief vandal assures his people that Vandalism will never die and that they would not allow anybody to break their spirit and destroy what they stand for.

Even before the recent incident, the culture of vandalism had always given people some concern. Some say vandalism is all drama; nothing important that should warrant our turning of the eyes to see its many other sides. Others, however, suspect that age-long perceptions people hold of Commonwealth Hall as a place of bad nuts, have on occasion without number found expression in the para-normal conduct of the Vandals. For instance, mark their CUVAA games, where competing halls are supposed to disembowel all the profane in their repertoire, and add gestures and props that would communicate the full extent of a very 'dirty' brain. And you have to sound dirty-necessarily- to win. And what do they get for the award? A penis-shaped carving, even though often, the songs talk more about the female genital organ. Usually, they leave behind a lot of trouble.

Then their Hall weeks, where students wear sexually-provocative robes, especially ladies G –strings, cossets, and skirts, to either give a palpable demonstration to their lack of female companionship, as most of them are, or their vulnerability and perceived lack of civility. Instead of educational talks and debates, women from secretarial institutions are 'imported' to add to the fun. The person who arranges these girls becomes a bit of a munching generalissimo, who is usually a chewer- in the word's most desperate sense. This is when ladies are rigged to Room C4 instead of C5. But vandals have a unique spirit: They never fight when they find out: It pleases Father Bacchus that a Vandal finally ended his munching drought; that is all that matters. But their father Bacchus is not quite all-knowing, because often the C5 outer room occupant would have narrowed his inner roommate, and all those in the outer room, to pave way for an uninterrupted munching extravaganza. And he would later come out to give a sermon on how Bacchus aided the munching process to victory. But there was usually no contact at all; he would have just 'babooned' his visitor all day, to the disgust of Bacchus.

This is all fun. University is not all Archaeology and Sociology; students need to let the university leave a certain imprint on them, even after they had checked themselves out of the thick walls of the Great Hall. Just that, with vandals, the imprint is often indelible, but it is for a good reason: Anywhere you meet a Vandal, there is a natural connection-something that people in the colonies would always envy. This connection has helped in job searches and afforded many of them good breakthroughs in many important areas of life, including back passes (recommending a girl to a fellow Vandal).

So, is vandalism such a bad idea? This is a harmless culture that does not really work against the promotion of discipline in any university. Where there is a problem, is however, when there are excesses. That is the beef of the university. And perhaps, instead of charging this time, members of the Great Hall would want to take a hard, long look at things. They would, for instance, be concerned that many ladies still find visiting the hall a risk they would never bear. Those who visit their babooner boyfriends rather too frequently are often given unpleasant names. They are also those who suffer terrible practices such as alangima (where, a muncher arranges with usually sex-hungry colleagues to spy on a sex bout). And that is usually top filla, because the man may have suffered three years of sex drought. His breakthrough comes as a relief to everybody.

Maybe, instead of going to court, Vandals should consider how the decision to convert their city into a mixed hall would help in checking these perceptions. Even though most parents and guardians, and indeed the university administration, are aware that Father Bacchus is at worst imaginary, and at best a god of wine and festivities, they are not altogether convinced that there is no connection between the culture at the hall and the influence of a certain deity. Sometime in 1998, when a Gyegede of a brainy chap was Chief Vandal, the Christian lobby on the university of Ghana campus ganged up to force their way into the Bacchus shrine, to break all the demonic spirits that had possessed the members of the Hall. It was a frightening scene, as the chief Vandal with his chief priest and other members of the outfit barricaded the entrance of the shrine. It was really a tug of war, as the Vandals chanted and 'charged' throughout the exercise, to guard the shrine. Then, something really spectacular happened: The Chief Vandal started crying as if a real treasure that he had sworn to was being desecrated and insulted. As he cried, the Christians pushed really hard, trying to overpower the Vandals. In the end, I don't remember who won, for I was only a spectator, not knowing whether to support the Chrife people, because I was a known member of the Assemblies of God Ministry on campus, or join the Vandals to guard the spirits of our noble Hall.

What is in the Bacchus shrine, anyway? And why should the Chief Vandal cry? That confused many a Vandal: Is there something that the Chief Vandal and his outfit know that we the ordinary members do not know? I have had the pleasure of sharing a room with a Chief Vandal, who was also my course mate at the graduate level. Did I notice anything unusual during my year's stay with the Chief? Not at all, apart from the many visitors he received. He still wielded considerable influence, even though he was no more in office. He had become a postgraduate student, and really exhibited the maturity that is often expected of senior students in the Great Hall. Suddenly, we were not going on processions and partaking vigorously in Hall weeks anymore. Not that there was too much to study at the postgraduate level; somehow the postgraduate person stood out, because he wore a mature demeanour that also checked the extent to which he could live the veritable vandal life. So, often people have asked: Is true Vandalism compatible with mature postgraduate behaviour? Why do the postgraduates usually grow out of it?

This, perhaps, may be the inspiration behind the University of Ghana's decision to pack postgraduate students into the hall. In any case, we understand vandalism has always been on the chopping board; the recent Busumuru heckling may have provided the impetus for its implementation. So, maybe the Vandals should not take it too hard on Professor Kwesi Yankah. He had since the Woes of a Kwatroit days been looking at the woes of the Vandals. And now, Vandalism is being hunted to give up the ghost.

Well, not yet. Vandals never let go that easily. If our brothers in our offshore colonies have always been pardoned when they shit-bomb their female halls and insult their university heads, why should Vandalism be wiped out? If the authorities at KNUST found no reason to break the Katangee front, when those students spent the night emptying all the ponds in their halls of the sand and gravels that their VC had ordered to fill them, to stop ponding, why should Vandals suffer for never disobeying any VC? Vandalism means fetching water for our sisters in the V-V alliance when the taps stop running, and buying them kelewele for their learning pleasure. It is not in the Vandalism culture to shit-paint the flower pots in our only female hall, as students of Africa Hall at KNUST suffered at the hands of their BWT male colleagues. If Legon finds the harmless drama of libation pouring and singing unruly behaviour, they would be pleased to know that in universities elsewhere, it is fashionable for a male student to bare his bottom in the presence of his female colleagues, in typical BWT fashion. If Legon finds the quiet procession of Vandals unruly, they should go to our offshore colony in Kumasi, where students use the Bombadier, a loud locally manufactured device that produces a thundering sound to break everybody's tympanic membrane.

Of course, truth stands in Commonwealth Hall, and Vandals are warming up to see where the truth lies in this matter. If Vandalism is not all drama but a Pentecost-style fire baptism that feeds the spirit within, then it will live on - with or without females. For, Vandalism is not only a culture in a university hall; it is a way of life. Tw… bon!

A Vandal in an offshore colony in North America.
[email protected]