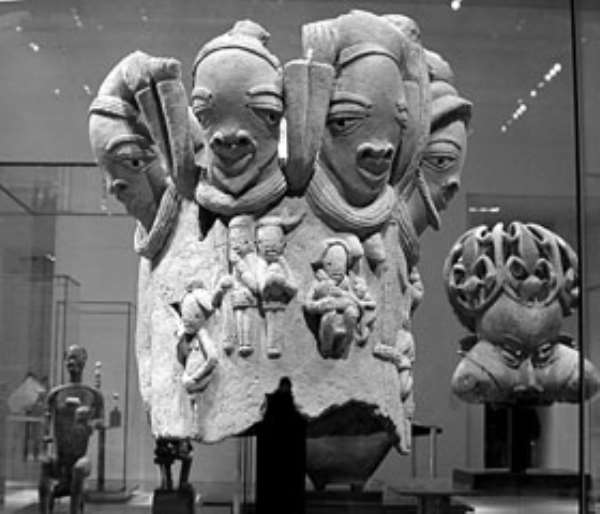 FRANCE'S surprise hand-over of four fragments of an ancient tomb mural to Egyptian antiquities authorities recently makes art authorities around the world pop questions about Nigeria's steep in the nitty-gritty of art politics.

Probes about what the Nigerian government in the campaign to retreive its thousands of antiques scattered across the western art collections and museums filled internet art discourse platforms.

Penultimate Friday, President Nicolas Sarkozy of France pledged his country will return four priceless tomb murals that are originally from Egypt to the north African country. He further told the Egyptian President Hosni Mubarak that he will return a fifth piece this week.

French culture ministry made the disclosure that Sarkozy will deliver the fifth fragment to Mubarak during a lunch at the presidential palace in Paris on Monday (yesterday).

According to the Associated Press report in France claimed that the fragments were acquired in good faith by the Louvre between 2000 and 2003, but their provenance was called into doubt in 2008 after the discovery of the tomb from which they were believed to have been taken.

France said in October that it would return the five fragments held by the Louvre museum as a way of showing the country's determination to fight the illegal traffic in cultural objects.

Under the United Nations Educational, Scientific and Cultural Organization (UNESCO) convention of 1970, countries agreed measures to prevent the illegal export of national treasures. Based on this article of the UNESCO convention countries of the west and central Africa such as Nigeria, as well as Ethiopia, Algeria and other black nations who were heavy victims of the looting of artifacts by western countries have been engaged in a quest for a return of their treasures in European collections.

A tandem growth of black consciousness and awareness of the essence of visual art pieces in the African religious practice among Black Americans between 1950s and 1970s spurred a momentuum of global campaigns that helped the African countries' courses.

As the art historian and curator, Edmund B. Gaither, of the National Center for Afro-American art noted the African-Americans campaign helped sensitise the global community on the role of African arts in Africa's belief system and mobilsed a wider audience. Hence public and private collections in Europe and America began to hide or work on the provenances of their collections as the struggle for equal rights hiegthened. Gaither noted that the range of published artworks highlighted how the

the teft or forced-take of the artefacts as in the 1897 British attack of Oba Ovurawon palace in Benin City dislocated the natives “spiritually and psychologically.” Similarly the trauma of slavery and colonialism and various problems associated with collecting African artifacts” in foreign collections that are not their original homes.

African-American interest focused initially on Egyp-art at this time. Missing indications of provenance was the core issue and later attention shifted to other countries' art such as Nigeria's and other productions from West and Central Africa.

In 1976 when a British museum demanded to be paid for the use of the Benin ivory carving which was used for the Second World Festival of Black and African Arts and Civilization (FESTAC) which she hosted in Lagos and Kaduna in 1977, the campaigners for justice to owners of African artefacts were riled up. This led Nigeria deeper into the call for the return of its art treasures in the the west. Diplomatic negotiations, through such platforms as UNESCO meetings and bilateral talks among culture ministries were upbeat until the regime of Ms. Boma Bromillow-Jack as culture minister.

Instigated by the Bromillow-Jack era zeal then, In January, 2002 the National Assembly communicated Nigeria's demands for the return of its treasures in Britain. Through the House of Representatives the Nigerian parliament called for the return of Nigerian works of art in the British Museum. The legislators called on the then president, Chief Olusegun Obasanjo, to request the repatriation of the artifacts, taken away during British colonial rule in the 19th Century.

Explaining the quest, the late Dr. Omotoso Eluyemi, who was then the director-general of the National Commission for Museums and Monuments (NCMM) told the British Broadcasting Corporation (BBC): “If you go to the British Museum, half the things there are from Africa.”

The motion, sponsored by 57 legislators, was passed unanimously. It urged the government to safeguard Nigerian museums from being “burgled” by hired agents.

In 2001 Time magazine reported Eluyemi as saying: “These objects of art are the relics of our history – why must we lose them to Europe?

“If you go to the British Museum, half the things there are from Africa. It should be called the Museum of Africa.”

Thereafter, less and less was heard from Nigeria's Ministry of Tourism, Culture and National Orientation on the fate but for last month's hint by the Special Adviser to Gov. Adams Oshiomhole of Edo states on Culture and Tourism, Mr. Omo-Ojo Orobosa, a lawyer, that the state is planning to file a suit in international court for the enforcement of return of artifacts stolen from Benin.

Even when, in June, this year a row over the provenance of some Nigerian artefacts exhibited in Geneva mounted within art circle and sympathetic connoisseurs around the world asked what the country wants so as to spur their action, nothing was heard from the Ministry of Tourism, Culture and National Orientation or the country's UNESCO office.

At the height of the row in Geneva, outspoken Black American art historian, activist and art blog publisher, Dr. Kwame Opoku wrote this in disgust: “I am writing in connection with the continued looting of Nigerian and African artefacts for the West which is exemplified by the current exhibition at the Barbier-Mueller Museum in Geneva.

“As you may be aware, a group of Swiss scholars and other scholars have protested at this exhibition. They have identified objects from the exhibition which are said to have been looted from Nigeria, Ghana, Mali and Burkina Faso. These objects are on the ICOM Red List and should not have been exported.

“The question now is how Nigeria is going to react. There is great support for Nigeria in this matter. I have suggested in an article possible lines of action. The least that will be expected of an owner whose stolen property has been identified at a specific location and under the control of a known person is a statement of claim demanding the return of the property and an end to the illegal possession.

“So far, I have not heard of any action by the Nigerian authorities. This is an occasion Nigeria and the other African countries cannot afford to miss to restate their policies regarding the looting and stealing of our cultural heritage.

“I am writing you in the hope that you will do whatever you can to encourage and support those responsible for protecting our African heritage to act. In this matter, silence is no option. We cannot remain silence in the face of the depletion of our resources. These artefacts are not only spiritual and cultural icons but have also enormous financial worth. We owe it to future generation to do whatever we can against the continuing robbery of our resources.”

But the feared silence greated the development.
This current move by Sarkozy like the action the British Museum (under Robert Anderson) in 2001 refused renewed calls for the Elgin Marbles from the Parthenon to be returned to Greece brings the issue of the return of the artefact to the frontrow but there are fears of how the culture ministry will respond.

Experts worry that the issue of return of artefacts to their origins, which is cardinal in the activities of UNESCO have been so muddled up by the diplomatic clout of the acused rich western countries that owners of the works are friegthened away of their rights. The appointment of non-artists or people with scant knowledge of the issues in question at the helm of culture ministries as well as the deception that there is more to gain in other forms of tourism which the west project combine to lure most African countries away from the hitherto strong campaign.

Commenting in the UNESCO website, Heritage Key survery in November art critic Jon Himoff noted that “repatriation issues are to resolve.The big Museums have the greatest advantage when it comes to the artefacts that the UNESCO heritage sites and others want back – the big Museums have possession. Further, the Museums typically reside in the countries that made the laws governing repatriation. But as cultural tourism continues to be a growing and massive business, the UNESCO sites are making their own big Museums and are able to hire their own lawyers to defend their interests. The complex battle for who controls artefacts is really heating-up now. Perhaps the issue of who owns antiquity is possibly less urgent than who controls it.”

Reacting Dr Opoku moaned: It may be interesting to know the public opinion on this matter but since most of the people in Africa cannot read nor write, I wonder whether this survey can be used to deny to those,for example in Benin,whose cultural artefacts have been looted by the British? Besides , are we really going to make the restitution of objects that have been clearly looted or acquired under dubious circumstances dependent of the opinion of those primarily responsible for this situation? Are morality,fairness and justice,United Nations and UNESCO resolution no longer relevant to such issues?

It is only on the assumption that these factors are no longer relevant to looted artefacts or artefacts acquired under dubious circumstance that the Western States , such as Germany,Great Britain can afford to be seen disputing with Egypt and Nigeria. Take Egyptian artefacts for example,how many Egyptian objects are in the West – Germany, Great Britain, Spain, Belgium, Netherlands and France? How many European aretfacts are in Egypt and the rest of Africa? Surely a sense of proportion is missing here. How can Germany even discuss with Egypt whether Nefertiti should be returned or not?. The Berlin Egyptian Museum alone has some 100 000 Egyptian aretfacts,including objects weighing over five tons. How much more do the Germans need? A look at the British Museum or Louvre will demonstrate what I am tring to say.

“James Simon who finaced the expedition to Amarna as a result of which the bust of Nefertiti was discovered and sneaked to Germany under unclear circumstance, was in favour of returning the bust to Egypt in exchange for other artefacts. Adolf Hitler, was against such aproposal which had been agreed by all German specialists consulted. So whose will now prevails, that of Simon or that of Adolf Hitler?

“It is noticeable that when it comes to discussing cultural artefacts taken by Westerners from other countries,Westerners immediately shut out all priciples of fairness, equity and solidarity. Even if Egypt did not have a right to development. Interestingly, as the culture authorities keep glued tongues on it, their counterparts in the acused west are talking and taking the issues further beyond reach.

For example while Prof. Dimitrios Pandermalis the president of the new Acropolis Museum, in Greece hints that artefacts like the Elgin Marbles belong to the world the British museum claims objects like vthe Benin Bronze or the Ethiopian columns are global heritage that should not necessarily require a return to any original base.