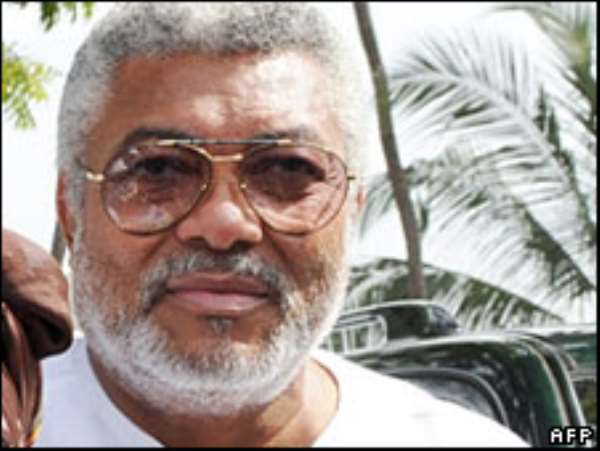 Kindly read this excerpt from one Sarpong Justice's article published on ghanaweb.com on July 14, 2009. Pay attention to its implication but not the grammar.

“First, President Mills is taking humility to a disgraceful level if he think dressing in that watchman's attire is going to endear him to anybody, then he is sadly mistaken. First, let me apologise to my Northern brothers and sisters that, there is nothing wrong in dressing in smocks because I also have smocks but that was a cheap smock badly made with a white shirt under it which made him look like the KUSASI watchman at my family's hotel. He could have been in a more dignified smock than that. Naadu didn't help matters either with that cheap Chinese fabric cloth with a "KABA" that lacked any discernable style. Nana Konadu Agyeman Rawlings is not my favorite woman but at least she did show class as a first lady with nice African clothes intricately made and nice headgear. Naadu's hair was not even well made and she could have done better by wearing a headgear.”

This article was regionally sentimental, ethnically derogative, culturally impudence and character venomisation. What does this writer intended to convey by “....made him look like the KUSASI watchman at my family's hotel” The most peppering of this sentence is that the writer capitalised “KUSASI” I am simply lost about how to react to this Moo. Could he not let the sentence go without “KUSASI” watchman?

Even though I am not a Kusai, I am supremely filled with exasperations akin to that of a hungry mother viper that has lost a child in the middle of nowhere. How then will my dear northern Kusai feels with such an ethnic belittlement in the eyes of the world. This is screamingly and disgustingly uncouth and unaccommodating!!! Does this braggart or perhaps liar think mentioning a northerner as their family's hotel watchman give credulity to his story? Is he saying that in this world of ethno-philiasm his so-called family's hotel could not get any destitute from his tribe to do the job as watchman?

May I give this Moo some assignment to do: Did you know the genesis cause of Rwandan genocide in 1994? Did you know the Miss World blood-shed saga in Nigeria in 2002? You must do some readings on these questions and wise up your writings. And do not write if you have nothing sensible to say, thunder will not strike you! The north is growing and as a matter of fact the fastest in West Africa per my readings in 2005. And if formal education in the north had started the same time with south, I do not think “any-tin” could associate the north with menial and slave jobs.

I do not seek to create what I am trying to correct for this Sarpong would have realised that sarcastic, vituperative, pugilist, no-nonsense and demeaning characters are abound the north both lettered and unlettered.

This writer said the president was shabbily dressed with a badly-made smock. He also claimed to have better smocks than what the President clad. Ridiculous and callous! Even though he decided to locate himself in Texas, US, I can confidently say per his writing that he cannot be doing anything better that bathing dead bodies or scraping the toilet or bar attendant or street cleaner. Yet he claimed to have better smock than that of President of Ghana who refused per diems of about $5000 per day that can fill this Sarpong's wardrobe with gazillions of smocks.

This writer is plagued with dogma in grand mischief. He said Naadu Mills dressed in a cheap Chinese fabric. Which of the Naadu Mills is this blind talking about? If they are many anyway! I will not discuss these lies. Please kindly open to page 20 of Daily Graphic, Monday, July 13, 2009 edition. You will know that this Bogus “Bogger” is talking about a different Naadu Mills. The original Naadu Mills was gorgeous dressed in “KENTE”

One of the reasons why we do not develop as Africans is that we take ourselves and leaders high. How did you expect the president to dress? A million-dollar suit with mirroring shoe or what!? A president is not a demigod! Angels can fly because they take themselves light.

Did the writer saw the dress of Michelle? My sisters were surprised when I appointed at Michelle on TV to them? One of my sister could not believe that a wife of the “World's President” could dress as she put it “like a first year senior high school student” She did not clad in sophisticated suit or skyscraping headgear or 10-feet heel shoe or bracelet earrings or heavily made up. As a matter of fact, she appeared super-simplistic.

Did this Sarpong observed Obama's outfit at Cape Coast Castle? The most touted World President wore a black Lacoste. I believe if it was President Mills, all the misplaced media would have nothing to write on except “Mills in Lacoste”

Anyway, I do not blame this Phantom Sarpong but Rawlings. If Rawlings had not given up to democracy, there would have been nothing like 1992 Constitutions not to talk of Freedom of Speech enshrined in it. Today, anyone can vomit at the most pleasing sight. Very pathetic!