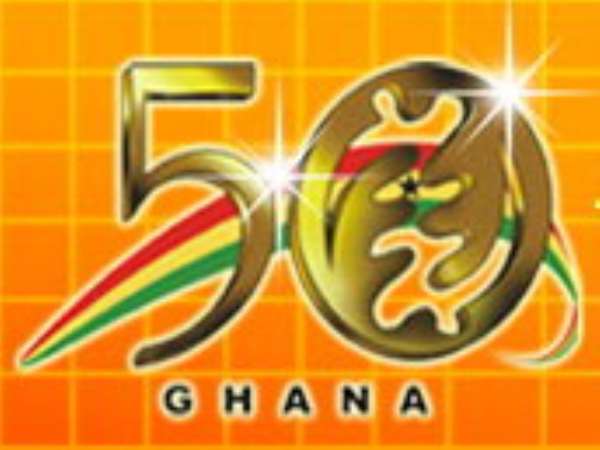 
There is something that has been shrouded in secrecy for two years until the lid was opened on Tuesday June 23, 2009. In fact Ghanaians have been kept in the dark on this issue for more than two years until it was revealed by Dr. Charles Wereko-Brobbey, the CEO of the Ghana @ 50 Secretariat.

Mr. Wereko-Brobbey popularly known as Tarzan released the bombshell by stating that due to the delay in the release of funds for the Ghana @ 50 celebratio ns, he loaned his personal amount of 2 billion old cedis to the secretariat. Tarzan released this information during an interview with “Fertile Grounds” Peace FM in which he lamented over Kwesi Pratt, Ben Ephson and others calling him a thief. According to Tarzan he did the pre-financing while awaiting parliamentary approval for the budgetary allocation earmarked for the celebrations.

Tarzan further stated that had it not been his personal intervention, Ghana's golden jubilee celebration would have been a fiasco. According to Tarzan he used his personal 2 billion cedis to furnish the office, pay salaries of workers, and acquire computers and other logistics. Well done, Mr. T arzan if that is what you want Ghanaians to say. But Ghanaians vividly remember that any time Tarzan furnishes an office he runs into problem. Does VRA ring a bell? Therefore, in using his own money to furnish a governmental office that he Tarzan was going to use, did something look abnormal to him? Did he not see any conflict of interest here? I mean if Tarzan informs everybody that out of the amount he loaned Ghana, he used so much to buy carpets and other stuff for the office, does he not think people would raise their eyebrows?

Dr. Tarzan went on to express his concern about the Auditor-General's report which stated that only one of the 25 toilets earmarked for construction was completed. Now hear what Tarzan said as a follow-up. He said since there was some substantial work done on all 25 toilets, the report should not have stated that only one toilet was completed. Ebei Uncle Tarzan, if something is not complete it is not complete. Period! If for instance you are preparing 10 big bowls of porridge for school kids and at the time of service only one is done, you cannot say that because you have all 10 bowls of porridge on fire they are all done. At the time of the celebrations, only one toilet was complete. Whether the other 24 were under construction is neither here nor there.. Were all 25 toilets completed for use during the celebrations? The answer is a big no. Only one was done. Please stop using some technicalities to explain yourself. It makes your case worse.

Anyway back to the loan from Tarzan. Had it not been the interview, Ghanaians would not have known that Tarzan provided the seed money for the Ghana @ 50 celebrations to take off. I never knew Tarzan could be so patriotic to loan Ghana @ 50 such a huge amount of money when he did not have to. In fact he himself said he did that out of national service to Ghana.

If you hear something like that your first inclination is to applaud what you heard from Tarzan and damn those who keep putting the heat on him that he did something fishy with the monies provided for the Ghana @ 50 celebrations.. But a closer look at the whole loan issue stinks to the highest heavens. Why would Tarzan sink so much money into a venture if he did not stand to gain even a pesewa from it is the question I would want to ask him?

Did Tarzan have to loan his own personal mon ey to the Ghana @ 50 Secretariat when he could have secured it from the bank? The National Planning Committee that gave Tarzan the approval to use his own money as seed money for the celebrations should come out and explain to Ghanaians why they did that because something does not add up. What are the conditions attached to the loan Tarzan gave to the secretariat? Even though Tarzan has stated how the money was spent, he did not give a thorough breakdown. We would need him to come back again and tell us how the money was disbursed. We cannot take his word on how he blew the 2 billion cedis.

Mr. Tarzan should not think that by telling Ghanaians that he loaned his own money to the secretariat would make the issues surrounding the celebrations, how monies were solicited and disbursed go away. For a poor country like Ghana where school children continue to sit under trees and write on the floor, spending a whopping 71.70 million cedis to celebrate the country's 50th independence does not make sense. For a country that went to HIPC in order to be forgiven its huge loans spending that kind of money which did not bring any economic or social improvement to Ghanaians is not justifiable. In fact it leaves more questions than answers. If you are poor and cannot afford even one square meal a day, it does not make sense to go buy three cloths for one funeral celebration.

As Ghanaians still grapple for answers I would want to find out from Tarzan if he would have spent that huge amount of 71.70 millions had it been his own money for a celebration that he himself knows was a big flop? People are making a lot of noise because this Ghana @ 50 celebrations did not benefit Ghanaians in any shape or form. Some at best describe it as an occasion used in sharing the country's scare resources among the rich and power brokers in Ghana. Talk to the ordinary people on the street and they would better educate you as to how that money could have been spent in a better fashion.

In a country where common malaria continues to be one of the number killer diseases, where patients at hospitals continue to sleep on bare floors, where the streets at Makola and other areas are turned into sleeping beds during the night, where our roads have plenty of potholes, where our youth lack gainful employment and armed robbery has become a menace, it becomes a misplaced priority to spend that whooping amount on the celebrations. The other day the former Presidential Spokesperson, Andrews Awuni in explaining the rationale behind the spending of that huge amount of money stated that it is time Ghanaians come out of their poverty mentality. Poverty mentality! So when we are poor we should even behave that we are not. Nice try, Mr. Awuni. But I was so shocked that Awuni who come s from an area where school kids still sit under trees to study would so soon forget about where he comes from and brand Ghanaians as poverty mentality people. Yes, when you suddenly become rich, sometimes it makes you forget about your humble beginning.

At this point there is no need for Tarzan to jump the gun by running from one Radio Station to another to justify how he spent the monies allocated for the Ghana @ 50 celebrations. The Presidential Commission looking into the issue would give him ample opportunity to tell his side of the story to Ghanaians. There is therefore, no need for Tarzan to take a swipe at Alhaji Muntaka that he did not use the monies to buy “kyikyinga”. There used to be a “Cho” Lorry that plied Accra to Achimota with the inscription “Cry your own cry”. Therefore, Tarzan should cry his own cry and leave Muntaka in peace.

All Tarzan needs to do is to be prepared to tie the knots for Ghanaians to know the whole story about the Ghana @ 50 celebrations. He should be prepared to provide some basic answers to the following questions;

How much money was allocated for the celebrations by the government of Ghana?

How much monies were raised from private sources both within and outside Ghana (companies and individuals)?

How much loans were contracted by the secretariat towards the celebrations?

What is the list of projects undertaken by the secretariat towards the celebrations?

How did the secretariat award those contracts and to whom?

Were the projects completed before the celebrations?

If the projects were not completed, why, and did the companies involved get paid?

Doe s the secretariat still have some outstanding debts to pay?

Can you provide genuine receipts to back all the transactions undertaken?

What has happened to the items that were imported towards the celebrations but never got to Ghana?

Are the 24 uncompleted toilets going to be completed since Ghana sank monies into the project?

What did Ghana get in return for spewing 71.70 million cedis?

What was the overall benefit of the celebrations to Ghanaians?

And any other information that would help to put this matter to a rest.. For good!

If I were Tarzan these are the things I would concentrate myself on and ignore Kwesi Pratt and Ben Ephson for calling him a thief because after all he would not be the first person to be called a thief, neither would he be the last person. So Mr. Tarzan, just hold your fire until you are called by the Presidential Commission. You would have ample prospect to do the “Tarzan Talk” which you are known to do best. That would give you the best break to tell your story to either exonerate you or tie yourself up.