Can our Asante Chiefs be Honest for once? 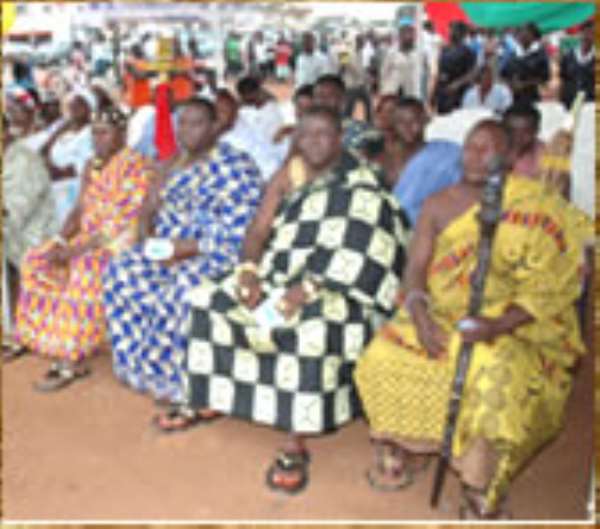 Once upon a time, there lived a super rich woman. She was though immensely rich; she continued to over-protectively seek her interest at the expense of her village neighbours. She had disregard for any living being except her close relations. She enjoyed her life to the fullest. She frequented night clubs, ate sumptuous meals and drank the best of drinks ever known to her compatriots. She had a real class. She had that deplorable attitude of looking down upon others with scorn. Not long enough, she fell seriously ill. She was clinically diagnosed as suffering from terminal cancer that was likely to culminate in her death within four weeks. In a deceptive attempt at soothing her fears, she consulted both the men of God and traditional spiritualists all of whom confirmed her impending demise within weeks.


This woman, though staring death in the face and about to succumb to its icy hands, still decided to do the unthinkable. She depleted all her life savings, sold out her great mansions and wasted the accruing money on attempts to saving her life though the odds were staggering. It would be expected of any selfless person in that situation to leave the wealth to his or her children, family, relatives etc., and die a noble death. After spending her last cent, she miserably kicked the bucket as had been predicted. Finding money to purchase a casket for her remains, let alone her funeral, became a teeth grinding problem. Why? She had wasted her entire wealth on trying fruitlessly to prolong her life although, the truth about her fate had been pronounced four weeks earlier.


I can visualise comparability between the described selfish woman as above and the sitting queen of the Kumawu traditional area. There is no difference between their inward-looking. This "Ohemaa", so cocooned in a myopic egotism sees no further than the tip of her bloody twitching nose. I have severally sought not only to advise but also, warn her about the fact that her fate is sealed in the pending Kumawuman chieftaincy disputation. I have also carried to her the gospel message about the fact that her bound-to-lose fight on the chieftaincy affair has to do with God Almighty but not with any human being. She is wrestling with the Invincible and Invisible God Almighty but not with any "Ananangya" or "Odumase" royals as purportedly seen by any corruptible mortal being. This queen having messed up Kumawuman with her deceased brother, the late Barima Asumadu Sakyi II, the paramount chief, for the past thirty four years is still adamantly seeking to have her way on who becomes the next Kumawuman paramount chief. Without any regard for the concerns of the citizens of Kumawuman and the need to learn to rotate the occupancy of the stool among the various royal families, she is bent on having her selfish way. She thinks she has the prerogative to impose the person of her choice from the "Ankaase" royal family on Kumawuman despite their exposed antecedent slavery.


Kumawuman citizens no longer want any incompetent, corrupt, visionless, selfish and greedy person for chief. They rather desire to have a dynamic, competent, selfless, far sighted and incorruptible person for their next paramount chief. They also don't in the least want to have someone from the Ankaase family but one from the auspicious Ananangya royal family. They want a chief who will not live in isolation for stupid reasons but the one who will socialise and reason with them.


However, she keeps bribing those empanelled to hear and give a ruling on the case. If I were to reveal the latest figure of the amount of money used to grease the palms of certain people in an attempt to win them over to decide in her favour, one will simply collapse. If she had that money to spend on other equally corrupt chiefs who know no shame, why did she not rather spend it on Kumawuman to carve a good name for herself and her Ankaase royals? This will have bettered their chance and standing in the eyes of the inhabitants of Kumawuman.


It must be noted that their continual hiding behind Akua Wurukye will not wash. She with her Ankaase royals can never achieve their sordid objective of holding on to the occupancy of the Kumawuman paramount stool. In the estimation of the inhabitants of Kumawuman, their time is over. A change for the better is needed. Wurukye in this case is reminiscent of a dancing puppet with cords attached to its limbs and joggled as and when and how the master wishes. There are evident cracks in Wurukye's strings which will snap sooner. She has assembled those foreign to the history and the environment of Kumawuman as her witnesses in her manipulated attempt to claim ownership of the Kumawuman paramount seat. Among her witnesses are the Krontihene of "Yooso" or whatever, in the Asante Akyem area, the chief of Abura and another from elsewhere. It must be noted that these people bearing false witness have already been proved as "paper weight" fighters in this war of heavy weights. It was at the hearing on Tuesday 09/06/2009 that the spokesman for Wurukye was proved to be a non-starter. He was as dazed and confused at the barrage of the simple questions thrown at him as at answering them. He accepted that none of the Adomako Pim's family members has/had ever ascended to the Kumawu paramount seat and that they are never related to Barima Tweneboa Kodua. What ensued will be stored in my Deep freezer until another time as famously said on the "Etuo mu ye sum" Peace FM's programme hosted by Agya Abrefa.


The Kumawuhemaa sensing looming danger dispatched her emissaries with a hefty sum of money to distribute among the panellists. She thinks to court their support by greasing their palms with bribe. At the appropriate time, those who have accepted the bribe will be exposed, shamed and prosecuted. I will personally pursue them for complicating the plight of my beloved Kumawuman citizenry. One of the chiefs is so corrupt that he recently connived to have one of his stools stolen, and the gold ornaments removed. Who is this chief then? It is a conundrum for which the reader has to do some research work.


Can any Kumawuman citizen do Ohene Agyekum on these corrupt people who by intent resulting from corrupt practices are dragging the Kumawuman chieftaincy case at a snail's pace? Ohene Agyekum of the NDC is popular to have evoked some "Abosom" (fetishes) on some lying NPP members sometime ago. Did it work? I can't tell. I believe in God much as the Ananangya and the Odumase royals or else such action should have been taken long ago. Anyway, leave it to God Almighty who has always been in control of the case to take care of their iniquities that are hurting Kumawuman badly. I shall never relent in my fight to liberate Kumawuman from the tentacles of the corrupt queen and her entourage. However, I invite the Kumawuman citizens themselves to assist as there is that far that I can go and that much that I can help.


Why most of our chiefs are in general and Asante chiefs in particular that corrupt? Why do they always pursue their personal interests instead of the collective interest of the community in which they serve? Why should Kumawuman continue to suffer in silence owing to corrupt chiefs having been appointed to decide their fate? Where is gone their renowned audacity, the mention of which sent cold chill up the spine of many in the Ashanti region? I never knew Kumawuman citizens are that coward of late. Do they think it takes only Palm nut soup, "fufuo" and bush meat to make a great man? Oh wake up, sleeping dudes!