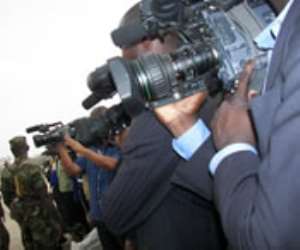 Imperatively for two reasons, access to information is essential to the health of the Democracy of any Country. First, it ensures that citizens make responsible and informed choices rather than acting out of ignorance or misinformation. Second, information serve a “Probing Factor” by ensuring that elected representatives uphold their oaths of office and carry out the desires of those who elected them.

In some societies, an antagonistic relationship between media and government represents a vital and healthy element of fully functioning democracies. In post-conflict or ethnically homogenous societies, a tension ridden relationship may not be appropriate, but the role of the press to disseminate information as a way of mediating between the state and all facets of civil society remains critical.

While media is considered as a fourth estate of the realm, it is also a part of the civil society arena which is well known to overlap other functional areas of democracy and governance. For example, support for media may yield results in governance activities, particularly those related to decentralization, anti-corruption, and citizen participation in the policy formulation process.

The rule of law may be further institutionalized by support for an independent media that keeps a check on the judiciary, reports on the government's profligate spending and promotes a legal enabling environment suitable for press freedom.

Free and fair elections conducted through transparent processes require a media sector which gives candidates equal access, and reports the relevant issues in a timely and objective manner.

This honorable role of the media has been unfortunately fractured and even in some cases abandoned entirely.

Some sections of the media in Ghana have adopted the Guard dog approach to the trade instead of the Watch dog calling.

The guard dog metaphor suggests that the media performs its role as a sentry not for the community as a whole, but for groups having sufficient power and influence to create and control their own security systems. This conception is delineated from other perspectives, which include (a) the traditional fourth estate role of watchdog media, (b) the lapdog view of submissive media, and (c) the view of media as part of a power oligarchy.

The Guard Dog Theory states that, mass media and journalists primarily support dominant political institutions, major economic groups, and their values, but can and do criticize those organizations, especially when elite class members of those groups violate system values or when they criticize each other. Journalists provide support for the existing power structures, even while occasionally producing content critical of it and elites.

In contrast to a passive “lapdog,” the guard-dog media occasionally attack an individual in power, but they focus the blame on the individual, not the system. A critical example of this in the Ghanaian setting is the Insight Newspaper. It is widely regarded as a guard dog media outfit of the National Democratic Congress but it gets very critical and tough with some officials of the Party who fall foul of the Law.

The Insight is seen in one vein as a pro-NDC Newspaper and in some other instances regarded as an objective one.
Indeed, journalists rely heavily on official sources and definitions of situations. They use official sources to add prestige or legitimacy to a story and maintain the illusion of objectivity.

Proponents of this theory take the middle ground between the Watchdog Model and the Lap Dog Theory, claiming that mass media are neither lap dogs of the powerful, nor watchdogs of the weak and oppressed. Because elites primarily control the media agenda and provide most news and information to the journalists, the media act as a guard dog not for the entire community, but for political and special interest elite groups that hold political and economical power.

An important consequence of this thinking is that the mass media support the status quo.

The metaphor oversimplifies the position of most critics, who believe that modern news media can create critical content. However this content has little impact on changing society, partly because ordinary people have limited access to economic and political resources.

Watchdog journalism is most commonly found in Think Tank, alternative media and citizen journalism such as blogs. It is occasionally found in mainstream media practice as well. Since independent media and think tanks are not profit-oriented, they have more latitude in which to adopt strong positions and cover a wide range of topics. However, it is also more difficult to determine the backing of non-mainstream outlets so they are sometime subject to covert exploitation by well-funded interests.

In recent Ghanaian history, a notable example of watchdog journalism was the investigative exercise carried out by Anas Aremeyaw Anas of the New Crusading Guide on the Diplomatic sex scandal in Accra. Similarly, Raymond Archer (Editor of The Inquirer) did some critical expose' on the New Patriotic Party administration (The Richard Anane saga) and many others.

Again, the Insight newspaper fits perfectly in this category too.

In Nigeria there was the infamous Tafa Balogun Saga which shook the Federal republic to its foundations. This revelation was as a result of investigations carried out by Allafrica media outfit and many others in Nigeria.

The largest corporate fraud in India involving Satyan- an IT outsourcer was revealed out of investigations carried out by the Business desk of Timesonline in UK.

An independent international audit team report with the assistance of a Tanzanian crack journalist led to the sacking of the Central Bank Governor Daudi Ballali, likewise News24 in South Africa who conducted several investigations into numerous scandals which turned out to be great discoveries.

Look out for Part 2.