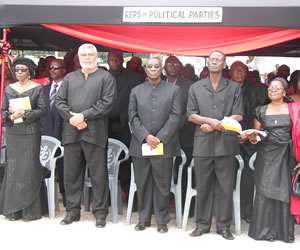 What goes round is supposed to come around and sure enough it often does but sometimes not fast enough and other times rather too strongly and too fast for anyone's liking. Consider the recurring problems with transitions in national political administration:

Three months into office, President Mills is getting no breathing space. Not even a few cubic millimetres of plain old oxygen for the lightest gasp of executive breath, Jomo.

President Mills may consider climbing up to the roof of his office at Osu one of these days with a megaphone in hand, facing the Atlantic with his chest to the wind, directing the sound instrument at the skies and letting out one hell of a shrieking howl at a thousand decibels.

His message? "What folks want of Mills is what folks will get from him pretty soon in dignified mode!"

This weird phenomenon of people within and without his party digging into Mills ribs first thing every morning and trying their hardest to distract him for sheer mercenary sport is unbelievable.

I passed by an eatery in town the other day and there was a sign outside the traditional catering facility announcing a vacancy for "a banku cook."

See? The proprietor of the eatery did not just refer to "a cook" but a banku cook, lest she saddles herself with someone who cooks up a messy porridge of sorts and calls it banku to the chagrin of patrons.

That is what I call precise communication, Jomo. People with messages to promulgate can learn so much from the woman who put up the vacancy notice. They all have one complaint or another against Mills without seeming able to say exactly what the complaint is.

This is the most famous of their complaints: "Mills is too slow and meek." Surprise, surprise, J.J. Rawlings has joined Mills' opponents in the chanting of this hymn.

JJ met journalists at the NDC's National Executive Committee meeting last week and publicly charged that Mills was too slow and had characters who did not look like true NDC creatures all around him.

Mr. Rawlings' vitriolic criticism of Mills in public for the umpteenth time attracted yet another round of the usual bitter criticism and outright condemnation of Rawlings across the political divide. There was even a reference to the man's rubble rousing ways.

If the original anticipation from JJ's camp was that Mills would run amok with a machete decapitating every perceived enemy of the NDC in sight, then I dare say JJ is right and Mills has been darned slow indeed.

If it is the case that some in his party would see people in the previous administration whose guts they hate thrown in jail because they have allegedly helped themselves to public money, then they need some elementary schooling on the matter:

The processes involved in the application of legal sanctions for criminal impropriety in political office under the law, take time and necessary painstaking diligence!

When people in the brand new opposition and Mr. Rawlings say Mills is slow, you wonder what the heck they are getting on about. What does "slow" mean?

Those who are criticising Mills' alleged inability to proceed with the business of governance at maximum pace seem thoroughly confused: One minute they say Mills is slow, meek and weak.

The next thing you know, they are grumbling that Mills is all over the place monkeying about with the constitution, seizing motor vehicle belonging to officials of the previous administration, taking decisions outside his executive powers, trying to hound former President Kufuor out of Planet Earth and breaking all his campaign promises to good boot.

He has even been referred to in some media as a terrorist. You wonder why folks cannot make up their minds about the man.

Insults and seedy jibes intended to ridicule the President may be forgiven but illogical and mercenary discourses on the state of the nation and Mills' style and pace need to be made light work of, by Mills' communications and public relations people if they know what is good for them.

Mills' opponents have had an effective networking political communications alliance of activists and media friends who between them have consistently set the agenda for public discourse.

Some can be very selective in according prominence to issues and events, so that very important issues they would rather not highlight for partisan reasons are made to look very mundane and not worthy of too much public attention.

By contrast, very insignificant issues and events are dramatised and played up very high on the public agenda, so that the petty is turned into a subject of national energy-wasting debate day after day.

In the less than one chance out of a hundred-and-fifty, that Mills had sought my advice on the appointment of the big shots around him, I would most certainly have said "nah to this one sir, and nah to that other one, sir", and given him my reasons.

The fact not withstanding, it is very, very strange indeed, that Rawlings joined his opponents, in virtually all but demeaning his own man before political scoop-hungry reporters.

Rawlings can pick up a cup of coffee with the left and a telephone receiver with the right any time, and call up the man who was once his Vice-President and whom he supported to win the last election and simply say "Hi Fii, what's up at the old Castle? I want to suggest that you consider this and that as a possible alternative to this and that. Maybe we should meet up and talk some more ... "

Can you imagine Mills showing the founder of his party the door should the old boy call at the presidency for a chat, nay!

So why does Rawlings for the umpteenth time and against the very elementary dictates of party dignity and unity stand in public digging at Mills the way he did? Could it be that someone has stolen JJ's phone?

It could well be that the man had expected to be closely involved in deciding who was to work with Mills and if a protocol quota of political appointments for Rawlings were chipped in for good measure, why that would have kept the great founder of the party jolly.

Anyone who says the performance of Mills' administration so far has been perfect is not being truthful but then, those painting a picture of a Mills helplessly floating in a sea of utter transitional chaos, are not the most honest folks around either.