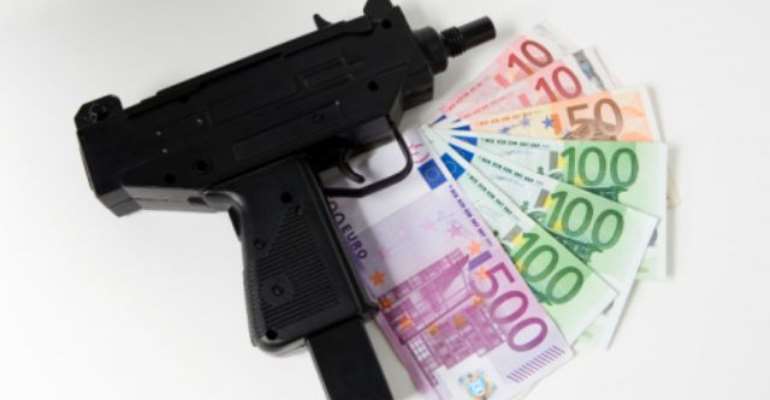 Northern Regional Minister, Samuel Nayina, quite rightly, is determined to take away the illegal weapons in circulation in that part of the country. But, quite frankly, he is using the wrong approach. Shortly after assuming office, he gave the people a 30-day ultimatum to voluntarily surrender their illegal weapons.

“One month from today, surrender all guns in your possession and thereafter, we would hunt for the guns ourselves,” he said. “There would be no limited period for the hunt.”

No one paid him any heed. Not even a single crooked AK-47 rifle was handed in. Few are surprised.

You see, the people of the northern Ghana love their guns. Without the weapons they feel vulnerable and powerless. Having a gun or two means you have power and influence. Those without weapons don't often get the justice they deserve. In an area where common sense appears to have taken a long (indefinite) vacation and intra-tribal enmity easily provides an excuse for landlords to evict their tenants you need all the protection you can get. In the Northern Region, an AK-47 offers the protection most people can't get from either the police or the justice system.

Ordering them to hand in their weapons, therefore, is worse than asking them to give up the roofs which cover their heads. Only a fool will do that. That's why when the regional minister issued his 30-day ultimatum, I concluded – without pondering for more than sixty seconds – that it wouldn't yield much. Sadly, I've been vindicated. But I am not gloating. I am rather saddened that Mr. Nayina and the Northern Regional Security Council have taken another false step which will not take us any closer to resolving the senseless conflict in Dagbon.

I was expecting that after the failure of his ultimatum, Mr. Nayina would proceed to do what he said he would do if the people failed to hand-in their weapons after 30 days – “hunt for the guns”.

When he spoke about 30 days ago, Mr. Nayina talked tough. Regrettably, it seems, he was only blowing needless hot air. Instead of the “hunt” he threatened, he's literally offering to buy back the weapons. Anyone who hands in a weapon gets a cool GHC300. You might say that the hunt is actually on and the money is only meant to be the bait. But I am not so sure. Enticing people with money to surrender weapons they have acquired illegally, especially in northern Ghana, is one of the dumbest things I ever heard.

In any case, GHC300 is peanuts, considering the amounts of money some of them save over a long period to be able to acquire their guns. Recently, I heard the story of a poor man who approached a police officer and offered to buy his (officer's) gun and cartridges. I know he's poor because he told the officer that he could only pay in installments. Just when the transaction was about to be concluded, he was arrested and he is being prosecuted. He is in the grips of the law because he spoke to an honest officer. If he had spoken to a rogue police man he would have bought an AK-47 for GHC500. For a man like this, so desperate that he would ask a police officer (of all people!) to sell him a gun, no cash reward is sufficient motivation cause him to hand in his weapon.

Others who didn't spend their own money to buy weapons but were rather supplied by “warlords” wouldn't dare give up what their masters have given them to work with – that is wreak havoc, spread fear and torment people.

The 'cash for guns' initiative is not a novel concept. It's been tried elsewhere. The fact is that it hardly works. There is a chance of a marginal success in areas where the flames of conflict have been completely extinguished and the combatants are beginning to learn to live at peace with each other. Dagbon – and the whole of the northern Ghana – is no such place. No amount of persuasion will get the people to surrender the weapons they hold so dear. The best we can expect is for a few dozen old, rusty and faulty guns to be handed in for wads of cash.

At this stage, it is very clear that persuasion has failed. And what do they say about “when persuasion fails”? I don't think it's “give 'em cash”. Yes, when persuasion fails, the coercive powers of the state must be applied. I thought that what Mr. Nayina meant when he threatened to order a “hunt” for the weapons. He seems to have backtracked and this sends a very bad signal that the political authorities are powerless and at their wits' end.

Instead of buying back the guns, Mr. Nayina will be best advised to stick to the original plan. A concerted operation should be mounted by all the security agencies to seize as many of the illicit weapons as they can lay their hands on. A sudden dawn raid will help retrieve more weapons than the 'guns for cash' initiative. But that will only be scratching the surface of the problem.

As I wrote a few weeks back, the whole nation has to make it clear to the people of Dagbon that we've had enough of their nonsense and it is in their best interest to stop slitting throats and pulling the trigger at the least provocation. The war between the Abudus and Andanis makes sense only to them. It doesn't make sense to most of Ghana and it has made them a laughing stock. The earlier they sit down as brethren to resolve their differences the better.

Secondly, it is most important that conditions are created to reduce the peoples' dependence on guns for power, security, justice and influence. This means removing the political shield that covers and emboldens certain people to commit crimes with impunity. So far, the rhetoric from the government has been very good – that no criminals will be protected by virtue of their political affiliation. But words alone are not enough.

The last time fighting broke out in Gushiegu, for example, the district chief executive was openly pointed out as one of those who instigated violence. That man is still walking free and no one has bothered to investigate the allegations against him. In a case like this, those who pointed fingers at him fear for their lives. GHC300 will not encourage them to hand in their weapons that make them feel safe. The accused has also become a target and for his own protection, he will want to keep a few guns strapped around him everywhere he goes. He won't give up his guns.

What's happening in the north is a very complex problem, indeed. There are no easy solutions. 'Guns for cash' is too much of an easy solution and I shudder to say that it won't work.

I Wish You Die In Prison — Judge To Convict Who Defiled His ...
29 minutes ago