Ghana: The Bright Star that Failed to Shine 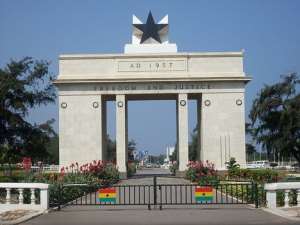 She was hailed as the beacon of hope for Africa, was described as the burning spear and guiding light of Africa, became the most spoken name in the whole world, became a whispered word within the corridors of power in Europe and America, was an icon and a brand name in Africa. All freedom fighters in the world drew inspiration from her achievements and many nations wanted to be associated with her. That was Ghana at birth.

Ghanaian leaders were held in high esteem across the world. They started shining from the day Ghana begun to make her own decisions and took her destiny into her own hands. The leaders in Ghana with Dr. Nkrumah as Prime Minister and later as President charted a path for the nation that amazed even the Europeans who thought Africans were incapable of manning their own affairs. Nkrumah himself having lived in the West and knew what was needed to be done to free his people from colonialism and poverty, begun to put in motion a series of development plans whose implementation led to the building of roads, schools, universities, teachers' training colleges, nursing and other vocational institutions. Through the D- Plans Tema city and the harbour were built and provided with the facilities such as roads and electricity.

The Convention People's Party government at the time realised that Ghana could not function as a viable state without the availability electricity and other infrastructures and as a result initiated the building of Akosombo dam to provide energy for industries, towns and villages. The building of the dam led to the setting up of factories in Tema, Accra, Kumasi, Bolgatanga, Wenchi, Abosso, Takoradi and many other places in Ghana. The building of the dam and the enabling environment created by the leadership at the time also attracted a number of foreign companies into the country. Agriculture production increased. Cocoa production and export increased and with it came the needed revenue. State farms were established to produce both food and cash crops.

As a result there were jobs and people could afford to buy the things they needed for themselves and their families. Parents could provide food, shelter and clothing for their kids. Parents had no worries about sending their kids to school as there were no fees and some children even received uniforms and learning materials for free. Academic materials and equipments were provided to schools, quality and standard of education was high, discipline in schools and respect for the elderly was at its best. Middle School Certificate holders were able to find jobs and vacation jobs were available for students who wanted to make some money.

University students were treated like princes and princesses. Breakfast, lunch, supper were provided free of charge. Each student had his or her own room and the learning environment can only be described as superb. On top of all these, tuition was free. Scholarships were provided for students to pursue further studies abroad.

Such was the quality of life and order of things that Ghana was regarded as a middle income country. Within a space of nine years the nation had made great strides economically and achieved a high standard of living, an achievement not seen in the over 150 years that the British ruled the territory. Those were the golden and the proud days of Ghana.

While they were making sure that Ghanaians felt better economically and socially, the leaders did not abandon the independence struggles of their other African brothers and sisters on the continent. The leadership of the country encouraged and supported other African leaders in their bid to gain independence. Financial, technical advice and emotional support were given to the nations who were aspiring for their own independence. When France threatened to destroy everything they had done in the country including rail lines should Guinea's demands for independence were not dropped, Nkrumah responded by providing financial support to the leadership of Guinea and in the end France backed off and Guinea had her independence in 1958. This explains why Nkrumah was made a co-president in Guinea when he was overthrown by the army.

Nkrumah used the UN and other international platforms to canvass for support and highlight the need for all Africa to be free from colonial rule. He linked the independence of Ghana to those of other African nations and made one of his famous statements that: “The independence of Ghana is meaningless unless it is linked to the total liberation of the African continent”. He spearheaded the formation of the Organisation of African Unity, a continental body that was to speak for the continent. The post independence successes of Ghana and the important role played by the leadership of the country led by Nkrumah prompted the Europeans to grant independence to several other countries especially in West Africa. Within a space of three years about nineteen countries had gained their independence among them Nigeria, Senegal, Gambia and Guinea.

The reversal of fortunes and the downward trend of what was once a beacon of hope started when Nkrumah and the CPP leadership failed to tolerate opposing views; their heavy handedness on members of the opposition using the Prevention Detention Act; the de-democratisation of the country as evidenced in the one party rule; the increasingly authoritarian rule exhibited by the CPP government; and the impatience of the army all led to the demise of the once bright shinning star. The series of coups that took place in the 1960s, 1970s and the 1980s; the lack of visionary and transformative leadership, corruption, mismanagement, neglect, the injection of tribalism into our political culture, and the selfishness of our politicians have destroyed all that was once the burning light of this great continent.

There was some kind of hope that the ushering in of the Fourth Republican Constitution and democracy would bring back the prosperity that was once enjoyed by our independence fathers, BUT after 16 years we still have not seen any sign of that prosperity as politicians continue to mismanage and toy with the economy and the people.

Today at 52 the nation is struggling and panting with no strong leadership and no clear sense of policy, purpose and direction. Poverty and unemployment are high with most parents unable to provide food, shelter and clothing for their kids. Parents are unable to pay their rents, bills and fees for their kids. The streets of Accra, Kumasi and other major cities in the country are swarmed with children selling ice water, bread, chewing gums and anything that can be hawked. Children head potters are visible every where in Kumasi, Accra, Tema and Koforidua, a clear sign that we are deeply soaked in poverty. These are the children who are supposed to be in the classroom and be trained as future leaders.

Today companies are folding up and workers are being laid off as Akosombo dam could only manage to give us a few kilowatts of power. The railway sector which is vital for the survival of every economy is struggling to function and traffic jams have become an accepted norm in our cities.

University education once a cherish dream of every student is now for those who can pay. Four students are now made to share a room which was once occupied by just one student and that is when a student is even lucky to have his name shortlisted by the authorities.

Today opportunities are very limited if not completely absent and the living conditions of the majority of the people are so appalling that the dream of every youth in the country is to travel to abroad and many have joined the US and British Armies out of hopelessness and desperation.

The future of the country will continue to be bleak and Ghana will have a long way to go if sound economic policies and management measures are not put in place; if the social and economic infrastructures namely the rail lines, roads, telecommunication, energy, irrigation, health and education are not rebuilt and if the nation's entire educational curricula from nursery to university are not overhauled and refocused to prepare the country for this increasingly scientific and technological age. More efforts must be made to train, retrain and retain our teachers, doctors, lawyers, nurses, architects, planners, engineers, technicians and bankers if we are to meet the demands and challenges of this 21st Century and beyond. And lastly the greediness, corruption, nepotism, selfishness and the insensitivity of our politicians must stop and the current politicisation of every national issue and the injection of tribalism into our national politics must cease from today.