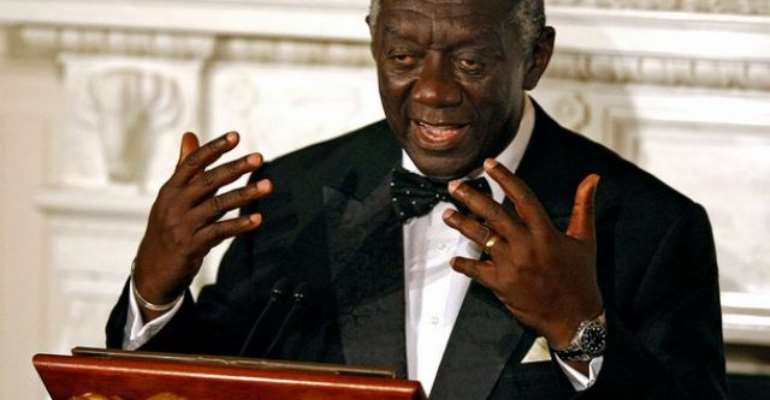 Dear President Mills,
If you've been looking for an opportunity to show the nation that you really have balls – a solid pair – your predecessor has provided you with one. As I write this, my blood is boiling like 'abenkwan' on fire and if I were anywhere near your age, I would have suffered a heart attack and fallen dead. Like most Ghanaians, I am outraged – by none other than your predecessor, John Kufuor.

Who the heck does he think he is? Or what does he take us for? Fools?

For eight years, this guy ruled this country like an elected monarch. He told us to “tighten our belts” because of our dire economic conditions. Yet he went around splurging – using our monies to renovate his private property, travelling like a lazy tourist, making his friends and cronies richer, not caring a hoot about the millions of Ghanaians who live in abject poverty every day.

No one can say Kufuor was an awful president. He wasn't as bad as Jerry John. So he was a good– at least by the standards Rawlings set for him. Those standards were shamefully low and any 'kenkey' who knows how to wrap leaves around dough would have had no trouble living up to them. John Kufuor performed better than Jerry Rawlings and he thinks we owe him such a high debt of gratitude he expects us to lie down for him to walk over us at every turn.

Getting to the end of his term, Kufuor decided that he had performed so well that he deserved to reward himself with a national medal – and a very expensive one as that. That was the shameless height of presumptuous arrogance and it angered me. At the time, I felt he had behaved like a vulture – a pest who doesn't care about the impact his actions will have on others. I thought he couldn't do any worse. But I was wrong.

Mr. President, I nearly suffered a cardiac arrest when a friend of mine showed me a document outlining the retirement package for the man who handed over to you just about a couple of weeks ago. The document was prepared by his special advisor, Mary Chinery-Hesse – who as things stand now – appears to have taken on extra special duties as his 'Retirement Godmother'. I suspect the two of them sat down and contrived to make sure that your predecessor leaves office much richer than he dreamt he would ever be.

Under the package 'cooked' up for Kufuor by Chinerey-Hesse, he is supposed to be going home with six brand new vehicles – three salon cars, two cross- country vehicles and one all purpose vehicle (and what the heck is that, by the way?). Why does one human being need six cars? Is he going to cut off his limbs and put them in different cars to be able to move around?

Your predecessor and his advisor also decided that he should be entitled to two mansions – one in Accra and the other in a location outside of the national capital (anywhere he chooses).

We, the longsuffering Ghanaians taxpayers, are also expected to sponsor an annual vacation abroad for him and his family for as long as he lives. We will pay for his medical bills, fuel his cars, make sure that his dentures are fixed, buy him condoms – and, trust me, he still can get it up – provide him with gardeners, cooks, secretaries, cleaners and drivers. The only wise thing Mary Chinery-Hesse did was not to make us pay for his concubines.

Most annoyingly, Mary Chinery-Hesse insists that John Kufuor should be given a lump sum of about 460,000 dollars – just to make his bank account look good and then on top of this we are required to pay him a monthly salary of about 4000 dollars until he breathes his last. To cap it all, he wants us to give him one million dollars to be used to set up a foundation of his choice.

Mr. President, for God's sake, take time to go through the document and find out for yourself the juicy retirement package Kufuor and his chief advisor decided he deserves. I look at this document and I am ashamed that Kufuor was ever my president. Let no one deceive you that he had no hand in Chinery-Hesse's recommendations and how they were purportedly approved by parliament. I have no doubt he did.

So now, the question on my mind is: how on earth does John Kufuor expect a country he declared as highly indebted and poor to give him a retirement package even the Americans will not dare dream to give to their retiring leaders – one of whom is incidentally leaving office just a few days after Kufuor.

As George Bush leaves office, he's only entitled to a pension package of almost 200,000 per annum along with a few minor perks here and there. If George Bush ever gets to see your greedy predecessor's retirement package, he would go green with envy and wish that he had been the president of Ghana – not America.

The fact that Kufuor is a greedy, selfish son-of-gun (I am disrespectful, I know) is beyond doubt. But I never imagined that he could take his gluttonous self-indulgence to such lows. As if it wasn't treacherous enough that he and his advisor decided that he deserved such an excessive and obscenely extravagant retirement package, the two of them decided to take the package to parliament on January 6 – a day before the rubber stamp one he worked with in his second term was due be dissolved. Foolishly, the MPs sat in secret meeting without some key members and approved the package – no questions asked. It's a big shame that the people's representatives disappointed us so but it didn't come exactly as a surprise to me. It's a case of “scratch my back, I scratch your” because as the MPs were approving Kufuor's largesse he was stamping theirs.

Mr. President, I am writing this letter to you because I feel many Ghanaians expect you to take action to halt this shameful rape of the country. There is a massive public outcry against this retirement package cooked up for Kufuor by Mary Chinery-Hesse because it's obscene, absurd, excessive and completely unjustifiable.

Sometimes, I get the impression that you politicians lose the essence of why we put you where you are. You are a university professor so I expect you to know this more than Kufuor (a failed brick factory owner, who claims to be a lawyer) ever did. But just in case you've forgotten, a politician's job is not to enrich himself and create wealth for his inner circle – like Kufuor did. A politician's job is to see to the well-being of the people – provide them with water, hospitals, schools, roads, leisure facilities etc. Every decision a politician takes should be aimed to enhancing the well-being of his people. Kufuor cared more about himself and his cronies than the people who voted him into power. That's why he went for a loan to build a mansion when he could have used that same money to renovate Korle Bu – which is not the hospital it should be. If you suffer the next bout of whatever disease that afflicts you, I am sure you won't go to Korle Bu. You would go to one of the best-equipped health facilities in Johanesburg. Kufuor had eight years to make Korle Bu a hospital again. He didn't.

Kufuor used millions of our money to renovate his house because he said the Castle wasn't good enough for him. He used our money to travel the world like a nomadic president. His sons and daughters have been in business for decades but they only found wealth after he became president. Kufuor thinks he was too good for us. He was good – but if you look at his record, Kufuor was only as good as he was because most of those who came before him were so bad!

Mr. President, Kufuor deserves a retirement package. He will get one. But it shouldn't be the one we are seeing now. I know you must be looking at yourself and wondering what you will get four (or eight) years from now. That's why I say that this is an opportunity for you to show that you really have balls and that you care as much as you claim to be.

Please, Mr. President, scrap this insultingly outrageous retirement package for Kufuor. Sit him down and tell him that we cannot afford to spend all that money on him alone. There are 22 million of us in this country and we are all contributing the little we can towards the development of this country. He did his bit but, really, has he sacrificed so much for this country that we should be compelled to pay him off to go and live like a rock star?

Some of our compatriots have suffered and sacrificed much more for this country than Kufuor did – or ever will. Yet they do not get even a millionth of the package he wants. He used our money to renovate his house. That should be enough. We will give him a brand new Mercedes Benz and a brand new Land Cruiser. That should be enough. We won't build him any house at a location of his choice outside of Accra. We will give him a monthly pension of five thousand dollars until he dies. That's more than he needs – especially if you consider that his son has a hotel right behind his house where he can go for breakfast, lunch and supper. We won't pay him a lump sum of 500,000 dollars. If he chooses to go on holiday in Honolulu, he should find money to pay for that. We will take care of all of his medical expenses – even his flavoured condoms. That's all he needs and that's all he deserves.

We should rather spend the rest of the money on what we expect our tax monies to be used for – water, hospitals, ambulances, roads, schools, electricity etc. The money involved can't provide everything but even if it provides water for 10 Ghanaians every day our money would have served its purpose.

Mr. President, tell Kufuor that enough is enough! Ghanaians are tired of the flagrant thievery and his extravagant indulgence. That's why they voted for change. If you don't scrap this outrageous retirement package, many of us will be left with no choice than to think that you deliberately decided to allow Kufuor to keep it so that when you are leaving you would take as much as you want. The choice is yours, Mr. President. But if you don't act now and you allow this thievery to continue, I will fast and pray to God to make sure that no former president lives long enough to cash his first pension... and that may just include you.