Who Listens To Kufour Anymore? 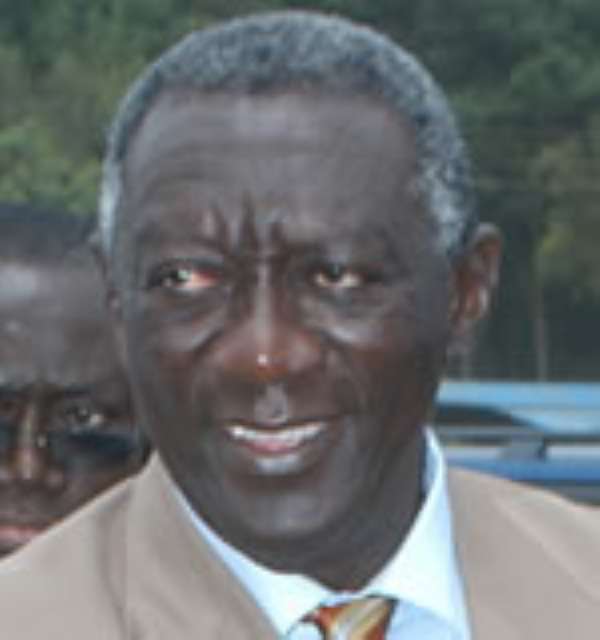 Sometimes losing an election can prompt people to dig deep into their archives to roll out some ideas that even little kids playing 'Agotagota” soccer can take with a pinch of sea water.

Sometimes if you listen to such people floating out such ideas during the dying days of their tenure, you wonder why they waited too long and the motive behind it.

News filtering in from the Parliament House indicates that President Kufour, who was giving his farewell speech to the august body, is now calling for electoral reforms. I could not hold my breath when I heard the news. Electoral reforms? In Ghana? When did it occur to him that Ghana needs electoral reforms?

Now you also hold your breath before I tell you the whole story. President Kufour unexpectedly, told Parliament that they should consider term limits for the Electoral Commission so that members of the commission would not stay in office indefinitely. He went on to say that, “There is no doubt that it is risky to have a referee that enjoys permanent security of tenure”. “Oyewa” Afari Gyan.

I would not have commented on this if Kufour had raised these issues immediately he took office in 2000. But he trusted Dr. Afari Gyan and his team and kept his reform idea to himself, which saw him winning the re-election in 2004. Now that his party has lost, suddenly he has come up with this idea. I hope Dr. Afari Gyan who many NDC supporters claim has been very biased against them is listening.

Dr. Gyan, now Kufour is calling for term limits to be placed on you since to Kufour it's risky to have you as a referee who enjoys permanent security of tenure.

Don't be deceived that this is a genuine idea being floated by Kufour because it is not. Dr. Gyan is now being kicked around by NPP operatives and supporters. His crime; he did produce enough “magic numbers” to propel the NPP to victory. Remember the litany of accusations spewed by Akufo-Addo on Saturday on the EC Chair?

Dr. Gyan, this is just the beginning, because the NPP and the UP tradition that has never accepted any electoral defeat in Ghana's political history would be making you a punching bag going forward. But you have some of us who would come to your defense if need be.

As usual I have some few questions for Mr. Kufour who is going down in history as the “Most Flying President” in the world. If Mr. Kufour thought giving permanent security to members of the EC is risky or dangerous, why did he not voice that concerns a long time ago? Does he not think that some of us would read into what he proposed and conclude that because his party lost, that was the reason why he is calling for such reforms?

Since Mr. Kufour failed to do these electoral reforms when his party was in power for eight solid years, I would advice him to just enjoy the rest of his presidency and go in peace. President Mills who is coming with a fresh breath of ideas would do what he thinks is best for the country.

Ghana now does not have a middle class. You are either rich or poor. And the rich people were the ones who become so loud in Ghana that when you voice any concerns for the poor they jumped on you. If you become a lame duck president whatever you say does not fly anymore, so we are just waiting for Kufour to hand over and go in peace. Even his NPP people stopped listening to him a long time ago. Now that there is a new Sherriff In Town, Mr. Kufour, please get over.

By the way where has Kofi Wayo been hiding all this while? He could not even raise money to contest the elections, and now that it's over I thought he would come out of his self-imposed exile but it seems he is still hiding. Somebody find him and tell him it's a new day in Ghana.