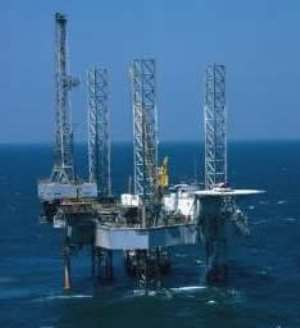 Ghana hopes to expand its democracy while avoiding the corruption that plagues its neighbours.

In a world mad for oil, last year's discovery of massive new reserves off Ghana's coast has been greeted as a national lottery ticket improbably paying off: Fishermen fantasise about steady jobs, politicians about gushing revenue. A traditional chief imagines a sparkling new city rising where now there are only impoverished coastal villages.

But these dreams come laced with fear. For Ghanaians can look in almost any direction for a glimpse of the ruinous power of natural resources -- not just oil, but diamonds, rubber, copper, timber -- that at first appeared to be nothing but the earth's blessings.

Even their own fabled Ashanti gold region, Ghanaians say, has benefited foreign investors far more than those who live among its riches.

So in conferences and newspaper columns, in political debates and casual chats, Ghanaians are struggling for a way to grow one of Africa's most stable democracies into one of its most prosperous, while blunting the corrupting power that has made oil a curse for so many of its neighbours.

Economist Kwamena Essilfie Adjaye, who advises Ghanaian President John Kufuor, estimated that the annual revenue from oil soon will reach $1 billion a year, more than the country now receives in foreign assistance and enough to embark on major development initiatives. But it is not yet clear where, or when, or for whom.

"That to me is the biggest challenge we will face as a nation, when you have that significant revenue flow in," Adjaye said.
Such conversations inevitably turn to towns such as Axim and other settlements along the shore nearest to where offshore derricks soon will rise.

Though ripe with the scent of fish hauled in each day on handmade wooden sailboats, the people here are poor and skeptical of the central government up the coast in Accra, the capital.

Axim's imposing slave castle, where European merchants once warehoused human chattel for their onward journey to the Americas, sits heavily on a hill above the fishing beach, a stark reminder of the dark side of international commerce.
In conversations along the beach, where catches have been scant for several months, many young men imagined they soon would find lucrative work with an oil company.

"Every Ghanaian is excited about it," said Nuhu Ahmed, 26, a lean son of a fisherman who recently finished college and hoped to avoid falling into the family business. "Once the drilling begins, the young in the area will be employed."

Yet these expectations were mixed with distrust of the government officials who will decide how the oil money is spent. Such a combination has proved explosive in Nigeria's oil-producing region, where discontent has grown into a prolonged civil conflict.

Many of the armed gangs there simply tap into oil pipelines for easy profits to pay for their weapons and fuel for the speedboats used in attacks on oil-company installations.

Easy access to resources has provoked or prolonged wars throughout much of Africa. In Sierra Leone it was diamonds; in Liberia, diamonds and timber; in Congo, diamonds and metals.

And in Nigeria, Angola, Equatorial Guinea and Sudan, oil wealth has helped entrench some of Africa's most corrupt governments.
In Axim, fisherman Kwabena Bassaw, 27, said, "If only they would set up some company where most of the youths get jobs, then we don't anticipate anything [bad] happening."

Ahmed, the college graduate, added a moment later: "Everything now lies in the hands of the leaders. . . . Even prior to the discovery of the oil, our leaders have not been truthful to us."
Bassaw replied, "Unless the leaders are truthful to us, we will not see progress."

Down the coast from Axim, near the border with Ivory Coast, the tiny fishing village of Mangyea has a few road signs erected by an oil company, which has an underused refinery facility on the town's outskirts. But little else has changed.

Villagers live in thatch huts built on sand. They eat what they catch and relieve themselves on the beach. Pigs wander in the village garbage pile, munching away. The village has yet to be wired for electricity. "They said they will do it, but nothing has been done," said Kwesi Zamnama, 45, a fisherman.

The gap between the expectations created by the oil discovery and the likely reality has been a source of pressing concern to the region's traditional ruler, Paramount Chief Awulae Annor Adjaye III, whose authority runs roughly in parallel with government offices. (He is not directly related to Adjaye the economist.)

Adjaye, who is cordial but formal, has been collecting stacks of paperwork about oil development in Ghana. He also has become a prominent regional spokesman on the issue, motivated by fear that his people could be easily overlooked in the rush to cash in on the discovery.

He said newcomers lured by the burgeoning oil industry will bring crime, corruption, prostitution and a spike in AIDS cases that will take well-funded government agencies to manage.

"We should not just talk about it as this is a national asset . . . this is for the government," he said, "and forget about the immediate needs of the people along the coastal littoral."

Adjaye has some suggested solutions: 10 percent of the government's take from oil revenue should go to the coastal region, and a fair share of industry employees must come from here as well.

He also wants refineries built, to create more jobs and to allow Ghana to sell a finished product, gasoline, rather than just the raw material, oil, as has been tradition in Africa.

But Adjaye's ambitions rise beyond such practical but mundane endeavors. To ensure that the development made possible by oil wealth is spread more evenly, he would like to see the creation of an entirely new city.

"The things that are put in this city should be equal to any city in the world," Adjaye said.

There is historical precedent for such things, he noted, but the cities built by Africa's natural riches were not here; they were in Europe, whose colonial profits fattened many capitals. "They have harnessed all these resources here and taken them to Britain to build their skyscrapers," Adjaye said.

As the tussle over oil wealth heightens within different levels of government, and among regions, cautionary voices are rising as well. Ghana's democracy, though among the most respected in Africa, is not so old, they warn.

The former military dictator, Jerry Rawlings, was still in power as recently as early 2001.

Corruption, hunger, unequal development -- all the things Ghanaians see as the ill effects of oil in Nigeria and elsewhere -- have also occurred in Ghana during its 51 years as an independent nation.

In Transparency International's Corruption Perceptions Index for 2007, Ghana ranked 69 out of 180, in an undistinguished middle zone that also includes Brazil and India.

"It's good we are getting it when we are getting it, because we have this burgeoning democratic experience," said Adjaye, the economist. "It's coming at a time when it's likely to be spent better than it would before. The timing is right."

Akufo-Addo going to IMF is not victory, it's a day of sadnes...
18 minutes ago