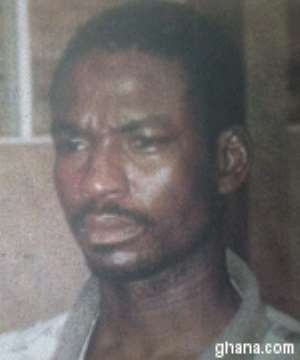 A 36-year-old driver mechanic, Charles Quansah has confessed to committing eight of the killings of over thirty women in the country.

A statement from the police said Quansah, alias Paapa Kwabena Ebo had been put on police surveillance for sometime now until he was arrested in February this year at his Adenta residence.

Charles Quansah also admitted to the police that he performed most of the killings through strangulations in Kumasi, Dansoman, Mataheko and Adenta between 1993 and 2001.

The statement said the police investigations into the serial killings in the country had been intensified in the last seven months with the setting up of a special investigation team, which includes experts in crime scene management and interrogation. The police also received assistance from the American Federal Bureau of National Investigations (FBI) in the form of scientific investigation support.

Meanwhile the FBI has collected physical evidence to their laboratory for further laboratory analysis and a report on these will confirm other pieces of evidence provided by Charles Quansah after which prosecution will be commenced.

Police and prison records reveal that Charles Quansah was jailed at the James Fort prisons for the offence of rape in 1986. After completing his sentence, he committed another rape and was jailed for there years at the Nsawam Prisons in 1987.

Charles Quansah settled in Kumasi after his sentence and moved to Dansoman four years ago. He again moved to Adenta in September 2001. It will be recalled that over 30 women were murdered in mysterious circumstances, which created tension and anxiety among Ghanaians as well as the security agencies I KILLED 8 WOMEN - Serial killer confesses [Graphic] - THE long hunt by the police in Accra for the faceless person or people who for years, murdered women in succession, for no apparent reason, has finally yielded results.

The culprit or at least one of them, is 36-year-old driver mechanic, Charles Quansah, who has confessed to killing eight of the women.

According to him, between 1993 and 2001, he killed women in Kumasi, and three Accra suburbs - Dansoman, Mataheko and Adenta.

Quansah, alias Paapa Kobina Ebo who hails from Komenda in the Central Region, said he killed them by strangulation.

Quansah was put under police surveillance for quite some time before he was arrested.

A police statement issued in Accra yesterday said he made the great confession on May 8, 2001.

He was arrested at his Adenta residence in February this year, following intensified investigations into the serial murders in the past 12 months, including the setting up of a special team which includes experts in crime scene management and interrogation.

He was sent to an Accra Court which remanded him in custody.

According to police and prison records, in 1986 and 1987, Quansah served jail terms at the James Fort Prisons and Nsawam Prisons respectively for rape.

After serving his sentence at Nsawam Prisons, he went to Kumasi Ayigya to settle there till after 1997 when he moved to Dansoman, Accra. In September 2000, Quansah moved to Adenta, Accra.

The statement said the Ghana Police have had assistance from experts of the American FBI in the form of what is known in the profession as Scientific Investigation Support (SIS).

The FBI has collected physical evidence to their laboratory for further scientific analysis and a report on these will confirm other pieces of evidence at hand in order to commence prosecution, the statement said.

Bawumia Is Making Comedians Jobless With His Economic Jokes ...
2 hours ago