House prices in Accra too high 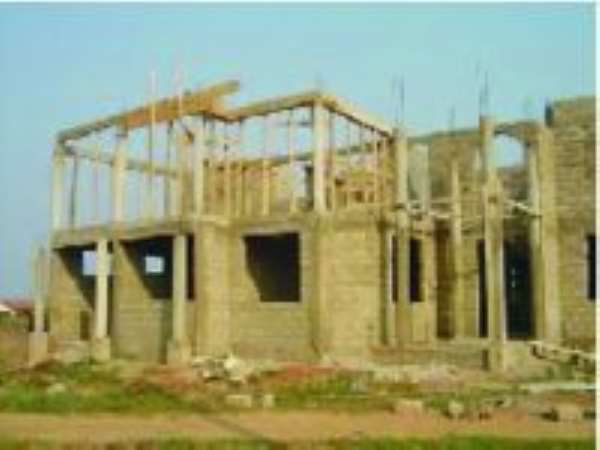 Accra is in the midst of an accommodation crisis, as house and land prices spiral out of control - fuelled by an influx of non-resident Ghanaians and foreigners – and even middle class Ghanaians struggle to get their first foot on the property ladder.

For a country still aspiring, rather equivocally, to reach an average per capita income of $1,000 a year by 2015, family houses in central Accra are typically going for around 100-times that figure, pricing all but the very rich out of the property market entirely.

In Airport Residential Area, undeveloped acre of land is going from upwards of $500,000 – the equivalent of about ¢5 billion. A three-bedroom, family-sized house might cost you $350,000, although the neighbourhood boasts so many "luxury” and “executive” pads that a more average price for the area is more like half a million US dollars.

Elsewhere in the capital, the trend is the same, and it will soon be impossible to find a family home anywhere within central Accra for less than $200,000.

In fact, many buying into Accra's more “exclusive address” areas, which also include the likes of Labone and Cantonments, are resorting to the kind of incomplete properties shown above, selling in East Legon for $95,000 and $100,000 respectively – when they still need hundreds of thousands of dollars extra for their completion.

Thus, “almost our entire mid to high end housing in these areas is going to non-resident Ghanaians and foreigners,” says Alfred Benson, Managing Director of Prestige Homes, a leading real estate agent which deals with a number of luxury properties.

Ben Boachie is Executive Director of Prudential Real Estate, an estate agents and property developer in Ghana. He has been working in the Ghanaian property industry for eight years, and is currently president of the Ghana Real Marketing Association.

He points out that for most Ghanaians – and developers – the “class A” districts of Airport and the like are an unrealistic aspiration. His company is currently developing a range of properties at New Botianor.

Thus even modest houses in the Accra area are becoming increasingly unaffordable, on a price-to-income ratio – and houses further out of the centre are appreciating rapidly.

The average three-bedroom house in areas such as Adenta, Dansoman and Dworwulu are less expensive, but also on the increase: current going rate is about $70,000 to $80,000.

Further out of town and you might find something in the $30,000 to $40,000 range – but with road networks and traffic problems as they are, the headache and expense of the daily commute into the centre is one of the reasons why the clamour for houses in town continues unabated.

“House prices will not decrease until then corresponding infrastructural change – such as improved transport routes – is also put in place,” Mr Benson warns; and that could be at least another four to five years.

In Ghana, it is difficult to talk about 'average' house prices, because there is no central record of land and property transitions which take place in this country - this lack of regulation in the industry in fact one of the factors compounding the escalating-price problem.

The most common way of averaging house prices elsewhere is to take the median, that is the middle, price – this way, the figure is less distorted by the top two or so percent of particularly expensive properties.

Escalating house prices are common to all major cities, with the median house sale price in New York City sitting at $885,000 at the end of 2006.

What is less marked elsewhere in other cities, however, is the yawning disparity between house prices and disposable income with which to afford them.

In Toronto, the financial capital of Canada, the average cost of a home was the equivalent of $290,754 in December 2006, according to the Toronto Real Estate Board – only 5.3 times the average household income.

Nationwide, the median Canadian house price was $239,584 in November 2006 – around the same as a house in central Accra – according to the Canadian Real Estate Association.

Meanwhile, for a Ghanaian household bringing in, let's say, ¢5 million a month – the equivalent of $6,531 a year – a $100,000 house is almost out of the question at nearly 12 times that income. And let's face it – the majority of Ghanaians work for a faction of this figure.

Mr Benson breaks down the categories of his company's clientele; even those buying into the “low-end” of the spectrum usually need to be earning an individual or joint income of at least ¢6 to 7 million a month, he says.

Whilst the majority of these are first-time buyers, they are overwhelmingly young professionals, “bankers, lawyers, and those working within financial institutions,” where there are established in-house loans available, and decent reliable salaries.

Although the company offer advice to their clients on mortgages and loans, working with the Ghana Home Loans and the Home Finance Company, the truth is that high interest rates in Ghana, and high criteria for securing a loan, mean that many Ghanaians are either ineligible to apply or reluctant to take the risk.

Not only are Ghanaians faced with higher house prices, but there is also less available finance to help them afford it.

Even the price of rent is becoming unsustainable; with a shortage of several million houses in Ghana to accommodate our exploding population, landlords freely flaunt the 1966 Rent Act – which prohibits their now-routine demands for payment up-front of more than six months pay advance.

So why are house prices so high in Ghana, and what is being done to combat the problem? Keep reading The Statesman this week for more exclusive analysis and advice on Ghana's property industry.

Uncompleted homes go for a fortune, as foreigners price Ghanaians out of the market, and accommodation shortages intensify