Mr. President, Investigate Only These 5 Cases 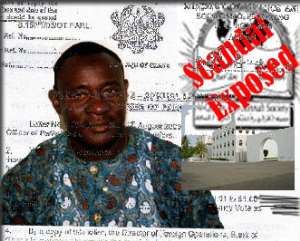 President Kufuor is trying frantically to sweep the corruption in his Government under the carpet by diverting attention from the real corruption to the symptoms of corruption.

He says he has submitted himself to CHRAJ for investigations into allegations made against him. That is not what the people want.

He says people should bring evidence of corruption. We repeat that it is his responsibility to direct investigations into allegations of corruption against his Ministers and against his Party officials.

Our democracy has not developed to the extent where an anti-corruption agency of state like the CHRAJ or the SFO can just get up and say they are going to investigate allegations of corruption against the like! s of J.H. Mensah, Nana Akufo-Addo, Mrs. Theresa Kufuor, Yaw Osafo-Maafo, Peter McManu or any such NPP bigwig

Indeed even in a developed democracy like the USA, depending on the political status of the person against whom the allegation is made, a Special Prosecutor is appointed to conduct the investigations.

In the NDC era in Ghana, CHRAJ Commissioner Emile Short did not just get up and decide to investigate P.V. Obeng, Col. Osei Wusu, Ibrahim Adam and Dr. Adjei-Maafo. The newspapers made the allegations, and President Rawlings directed Commissioner Short to conduct the investigations into the allegations. All those who thought they had evidence about the allegations provided that evidence to the CHRAJ.

We would also like to draw the attention of the President to Article 218 (e) of the Constitution. It states as follows:

"The functions of the Commission (on Human Right and Administrative Justice) — shall include the duty – to investigate all instances of alleged or suspected corruption and the misappropriation of public money by officials and to take appropriate steps, including reports to the Attorney-General and the Auditor-General, resulting from such investigation".

The Constitution does not require that evidence must be provided before investigations are conducted. Our case also is that as timorous souls as the CHRAJ members are, just as most Ghanaians are, the CHRAJ should not be expected to just get up and start investigating the President's men. T! he CHRAJ needs a signal from the President to do so.

We are however saying that there are cases of allegations of corruption, misdemeanours and felonies in which evidence has been produced, and we dare President Kufuor to investigate those allegations.

We will refer to only 5 of such cases: Case No. 1. Dr. Charles Yves Wereko Brobby. As Chief Executive of the VRA, the following allegations were made against Dr. Wereko Brobby, complete with dossiers of evidence: He got the VRA to lease a national electricity back-up power plant called the "Strategic Reserve Plant" at Tema, at a cost of US$6 million, paid monthly rent for it until the cost ! of the plant came to US$30 million, but the Plant never worked until all the 5 units were secretly returned to their owners; ¢14 billion (US$ 1.7 million) in alleged penalties was paid by the VRA for not lifting crude oil on schedule when the VRA had not been invoiced for payment; He spent a whopping US$700,000 on publicity and advertisements alone within a one-year period; He paid a local Public Relations firm up to ¢300 million just to produce VRA's in-house newsletter which over the years had been produced by regular Public Relations staff of the VRA. He wilfully and inexplicably changed a VRA contract award to a Company from ¢51 million to US$51 thousand. Case No. 2. Alhaji Moctar Musah Bamba, former MP and former Deputy Minister for Presidential Affairs. The following allegations have been made against him, complete with dossiers of evidence: He co-floated a company called 'Emirates Investments Limited' that used Presidential letterheads to guarantee private loans. The company attempted defrauding a bank with a letterhead from the 'Office of the President' with a forged signature of the Minister for Private Sector Development purporting to give a Government of Ghana guarantee. Emirates Investments Limited presented a fraudulent Canadian bank draft for $93,000 out of which it encashed $30,875.35 but the draft bounced upon presentation. He was involved in a junk bond visa scam, which further exposed an incredible abuse of the Presidency. He sponsored six NPP activists to an alleged NPP function in Austria using fraudulently obtained Austrian visas and also attempted to obtain visas for another squad of 19 young people on a so-called business trip to Austria. Case No. 3. Professor Kassim Kassanga, former Minister of Lands and Forestry. The following allegations have been made against him, complete with dossiers of evidence: He secretly re-awarded 42 Timber Utilisation Contracts (TUCs) from the NDC era that the NPP Government had cancelled to cronies and favourites of the NPP in gross violation of the principles of transparency, among which beneficiaries was Mrs. Comfort Wereko-Brobbey, President Kufuor's sister whose husband was a member of the Forestry Commission Board and who was given 89 square kilometres of the Asukese Forest Reserve. He took ¢3 billion belonging to the Forest Plantation Development Fund without the knowledge of he Board Directors of the Fund, used it to import mango seedlings from Burkina Faso for planting to create forests, which seedlings arrived during the harmattan season resulting in the wilting awa! y of all of them and therefore rendering the ¢3 billion a total financial loss to the state. Case No. 4. Peter Kwaku Amoabeng, former MP for Lower West Akim. The following allegation has been made against him complete with a dossier of evidence which is in the possession of Mr. J.H. Mensah and Papa Owusu Ankomah: He fraudulently attempted to obtain an Austrian visa for a woman and two children who he falsely represented as his wife and children respectively, and in the process committed the offences of fraud by false pretences, forgery, perjury, impersonation and deceit of public officer. Case No. 5. Mr. Wilson, former DCE for Mfantesman. The evidence about him is in the possession of Mr. Kweku Baako Jnr, Editor of the 'Crusading Guide' and President Kufuor's topmost propaganda adviser. The DCE awarded an Assembly contract to himself. In the course of execution of the contract, the buil! ding on which the workmen were working collapsed. As a result of the collapse, three persons died and seven were seriously injured. He was merely removed from office. Only five (5) cases, and old ones at that.

For now, we will not talk about the hundreds of other corruption allegations that have made against Ministers and other officials of the NPP administration. We will not talk about the kickback payments that President Kufuor collects from contractors at the Castle, an allegation made by no less a person than the Chairman of the President's own NPP Party, Haruna Esseku. We will not even mention that in that particular allegation, the evidence is all in the head of President Kufuor's Party Chairman, Haruna Esseku.

We will not talk about the offshore companies and foreign bank accounts that President Kufuor and his children have established and opened, an allegation made by no less a person than Giselle Yazji, former Economic Adviser to the President.

We will not talk about the US$8 million Golden Tree Hotel, aka "Hotel Kufuor", which President Kufuor has bought using his son Chief John Addo Kufuor as his front man, an allegation also made by no less a person than the same one-time Economic Adviser, Giselle Yazji.

We will not talk about the Minister of Health Dr. Richard Anane attending an international AIDS Conference, having raw sex with a foreign lady, having a baby with the lady, and transferring as much as US$100, 000 to the said lady in the USA, an allegation made by no less a person than the very same lady concubine, Alexandra O'Brien, herself.

We will not talk about a Deputy Minister of State, Thomas Broni, seducing the wife of a financier of his own ruling NPP, Martha Nkrumah, and setting her up in business with ¢500 million in kind of publi! c money from the state-owned GNPA, an allegation made by no less a person than the henpecked husband of the lady, Tony Osei Tutu.

Only the 5 cases we have mentioned must be investigated, and depending on what is found, we will decide whether to talk about the many other scandalous matters or not.

But there is a light at the end of this dark corruption tunnel. If President Kufuor will not order investigations into the allegations of corruption, what about the anti-corruption agencies of state themselves? Will they have the guts to initiate investigations into those allegations on their own? Anna Bossman of CHRAJ (Acting). Theophillus Cudjoe of SFO (Acting), are you listening? Views expressed by the author(s) do not necessarily reflect those of GhanaHomePage.

Music Review: Did Obaapa Christy steal ‘The Glory’ song from...
5 minutes ago