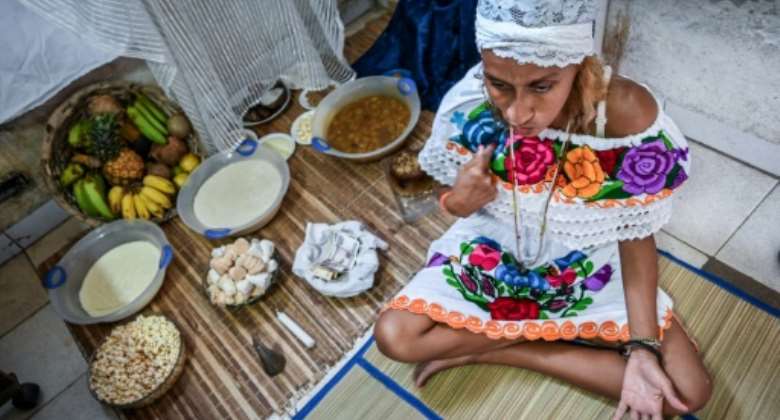 Aimee Ibanez is one of a growing number of priestesses of the Afro-Cuban Santeria faith. By ADALBERTO ROQUE (AFP)

First, they defied the male dominion over the Afro-Cuban Santeria religion by being secretly ordained. Then, they shocked the patriarchy by performing a ritual long considered the exclusive preserve of men.

The Santeria religion is hundreds of years old -- a mix of beliefs brought to Cuba by Yoruba slaves from West Africa, and Catholicism.

Experts say about 70 percent of Cubans are followers of Santeria.

The first priestesses in five centuries only appeared on the communist island in 2000, when Nidia Aguila de Leon, now 60, and Maria Cuesta, 51, were ordained in secret in Havana.

Today there are several hundred priestesses -- known as iyanifas or "mothers of wisdom" -- in Cuba.

The Santeria religion is hundreds of years old -- a mix of beliefs brought to Cuba by Yoruba slaves from West Africa, and Catholicism. By ADALBERTO ROQUE (AFP)

"As a child, I was always told that if I had been a man, I would be a babalao (priest)," Cuesta -- the daughter of a Santeria priest, told AFP.

But for the longest time, the role of women in the church was limited to cleaning and plucking chickens for ceremonies, she said.

Now, "I am the one to kill the hen" for sacrifices, said Cuesta. "I know how to throw the shells" to read the future.

"I know how to do everything, perhaps better than a babalao," she pronounced proudly.

Aimee Ibanez, a 43-year-old pharmacist and fellow priestess, says the role of iyanifas is also to "defend our rights as women."

But their growing presence -- and following -- has not gone unchallenged.

In January 2021, Ibanez and two other priestesses caused an uproar by presiding over a ritual known as the "Letter of the Year," a prophecy of what the new year holds.

Never before had it been done by a woman, let alone three.

"Many people were opposed" to women conducting the ritual, said Ibanez. "But many were also in favor."

The Yoruba Association of Cuba, the state body representing Santeria, expressed its disgust.

In a statement distributed on social media, the exclusively male association accused the women of acting to "desecrate... our cultural heritage, our religion."

At her house in central Havana that also serves as a temple, Aguila de Leon said that after her participation in the "Letter of the Year" ritual, critics from the Yoruba Association proclaimed the women would suffer death as "divine punishment."

Santeria was born from the heady mix of African religious rites and rituals found in the slave barracks of Cuba.

To be able to practice their religion outside of the barracks with their owners' permission, the slaves linked their own deities to Catholic saints to create the hybrid belief system that still exists today.

In the 1990s, after the collapse of the Soviet Union, Cuba changed from an atheist to a secular state, and the ruling Communist Party started admitting believers into its ranks.

Today, the streets of Havana are replete with people wearing Santeria religious symbols in the form of necklaces or bracelets, with different colors representing different saints.

On the beaches, a stroller will often find offerings in the form of cigars, rum or bird sacrifices.

With the recent explosion of iyanifas in the public eye, the Yoruba Association has had to moderate its position.

In the 1990s, after the collapse of the Soviet Union, Cuba changed from an atheist to a secular state, and the ruling Communist Party party started admitting believers in its ranks. By ADALBERTO ROQUE (AFP)

"We have nothing against the new trends that have arrived in our country in recent years, but it is not in the Afro-Cuban traditions" of Santeria to have women priests, its new president Roberto Padron told AFP.

However, iyanifas already existed in Nigeria before the 16th century when the first African slaves arrived in the Americas, Santeria priest and scholar Victor Betancourt said.

And with the cruel treatment of the slaves in their new home, many of the original beliefs were altered, or lost altogether, with the role of women specifically distorted, he said.

Historically, an iyanifa can do anything a babalao does except ordain other priests, insisted Betancourt, the husband of iyanifa Aguila de Leon.

Structure of government's debt restructuring plan is unaccep...
13 minutes ago

Cocoa farmer killed by fallen tree at Mankranso
29 minutes ago