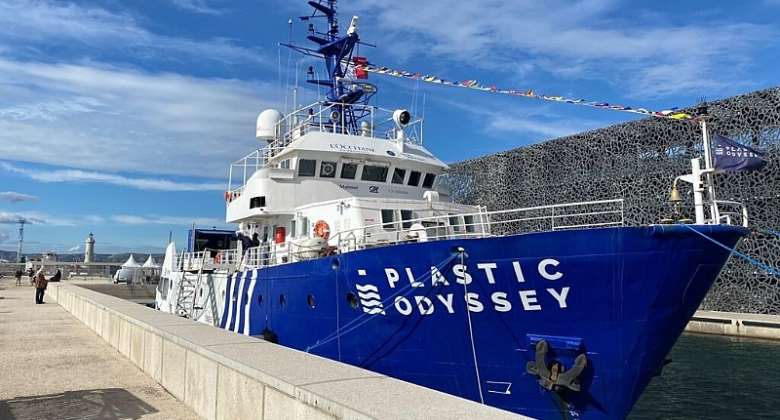 Plastic Odyssey will leave the port of Marseille, in the south of France, on 1 October for a three-year expedition. Its main goal is to find ways to reduce marine pollution by plastics in the 30 countries most affected by this issue in Africa, South East Asia and South America.

The Plastic Odyssey project dates back to 2016 when Simon Bernard, a merchant navy officer, was in Dakar, in one of the most polluted areas of the city.

"I realised there was great ingenuity in the country. People there were able to recycle everything, aluminium, cans, everything but plastic.

"The idea started from there, thinking how we could find the best solution to help people make a living and create jobs locally by making a ressource out of this waste," Simon Bernard told RFI.

Every minute, 19 tons of plastic spill into the ocean, the equivalent of a garbage truckload.

"The problem of marine pollution is not about cleaning up the ocean because once the plastic is at sea, it's too late. We have to act just before it ends up in the ocean," explains Bernard, CEO and co-founder of Plastic Odyssey.

A study showed that 80 percent of the plastic waste polluting the oceans comes from coastal areas in developing countries.

The problem ends up elsewhere, in low to middle income countries in Africa, South East Asia and South America. And they don't have waste management facilities.

"This waste accumulates in illegal dumps and ends up in the ocean at the first gust of wind."

Plastic Odyssey aims to train 300 entrepreneurs who will be encouraged to recycle plastic into useful objects, such as paving stones and pipes, using simple and robust machines, the plans for which are available in open source.

The aim is also to train them to set up recycling micro factories.

"In each country, we put out calls for applications and select around ten entrepreneurs who want to launch their recycling centre.

"We invite them on board for a fortnight and we incubate them, provide them with knowledge and, above all, connect them with local players who may be investors, potential partners or clients, who will help them to create this company and make it work," says Bernard.

In addition to recycling, Plastic Odyssey will be running awareness campaigns in each port to help reduce the consumption of plastic in daily lives.

The expedition includes 30 stopovers that will last three weeks each. On board the 40-metre ship are 10 sailors, accompanied by engineers, reporters and volunteers.

The boat will set sail on Saturday 1 October from the port of Marseille with a first stop in Beirut, Lebanon in mid-October.

Inflation will remain high till the end of first quarter of ...
25 minutes ago