The Folly Of An Octogenarian – A Rejoinder To K.B. Asante’s Article 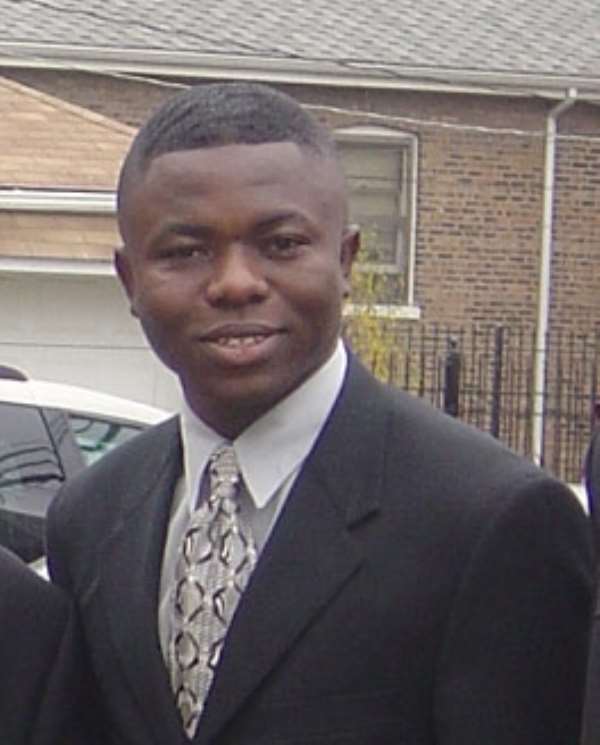 ...ON THE EFFORT TO ALLOW GHANAIANS ABROAD TO EXERCISE THEIR FRANCHISE This article is in response to K.B. Asante's piece in the Daily Graphic of June 27, 2005.The above article can be retrieved from the Daily Graphic website at www.graphicghana.info . It is recommended that readers read Mr. Asante's article first, as this will help them understand the issues being addressed here better K.B. Asante is man who served the PNDC government in various positions. He worked as an Ambassador and also a minister. He was also part of the team that drew up the 4th Republican Constitution we now have. At the twilight of his life, K.B. Asante's words and actions have become more inflammatory. By his words and actions, K.B. is showing himself in his true colors. This was the same man who on April 26, 2005 whipped-up ethnicity and tribal tensions in the country by organizing and leading a group of GaDangmes called the GaDangme Council in a demonstration with some placards which read “GaDanbes Are Awake”, “Accra Sports Stadium, Yes, Ohene Djan No” and others – GNA. “When the demonstrators reached the Christiansburg Crossroads and wanted to go towards the Osu Castle, the Seat of government, soldiers and the Police prevented them by using water cannons. The Demonstrators scattered, with some screaming in Ga: "Castle e' wo shekpong woba ya gyen" literally meaning "The Castle land belongs to us, we shall go there"” - GNA. Almost a half-century after independence when we should be pledging our allegiance firstly to our motherland - Ghana, before our tribes, the K.B. Asante's would want us to view ourselves as Dagombas, Ashantis, Gas, Ewes, Fantes, etc before we consider ourselves as GHANAIANS with a common destiny. Thank God, the GaDangme Traditional Council led by Nii Adote Obour II (the acting-president of the council) dissociated the respected institution from K.B. Asante's ramblings and rebuked that sort of ethnic agenda that Mr. Asante has been embarking on. Today, when our vibrant democracy which has been growing at a rapid pace is being expanded this same octogenarian says 'No!' In his article in the Daily Graphic titled 'The Law About Voting Should Not Change' K.B. Asante uses the State newspaper to make such a porous argument against emancipating ALL GHANAIANS that truly unveils his true identity – that he is anti-democracy and is an unpatriotic citizen of this country. That if ethnicity serves him right Mr. Asante will not hesitate to use it to destroy the country that made him who he is. That for the sake of politics K.B. Asante will ignore the right thing, and would incite vulnerable people to do the wrong thing. In a culture where the elderly are venerated to the brink of worship, one would have expected such a man of advanced age and stature to exhibit such wisdom as to make us - the youth - desire to learn from his feet. Sadly, Mr. Asante, by the stroke of his pen and the words of his mouth is becoming an obstacle to our national cohesion and development.

He starts his article by stating “The bill before parliament designed “to enable all eligible Ghanaians living abroad to register and vote in a general election” is fraught with dangers of maladministration and corruption and should be vigorously opposed.” Dangerous? The Attorney-General, Mr. Ayikoi Otoo, presented a bill to parliament that seeks to entrench our fledging democracy. This bill called The Representation of the People (amendment bill) seeks to give ALL Ghanaians, be they in Ghana or not, the RIGHT to exercise their franchise in determining who leads their motherland. The current law (Section 8 of PNDCL 284) as it stands guarantees Ghanaian citizens who work for Ghana's missions abroad the right to vote. It does not allow Ghanaians outside Ghana, who do not work for our missions, the right to register and vote in the General Elections of their motherland. But Mr. Ayikoi Otoo, seeks to amend this law to make it ALL INCLUSIVE. This Mr. Asante wants to tell us all is “fraught with dangers” and “should be vigorously opposed” What is the “danger” in allowing a fellow Ghanaian to exercise his civil responsibility? And why should the exercise of such Constitutional RIGHT be so dangerous that an 80-plus-year-old man would think that it should be RESISTED, and not just RESISTED, but RESISTED VIGOROUSLY”? As cynical as he has always been he does not have faith in the Electoral Commission who have so far, have organized successfully 4 General Elections and numerous Assembly/District elections, and has tagged the Commission with “maladministration and corruption”.

He agrees that “the right to vote in an election is an entrenched provision of the Constitution”, but equates that right to other rights such as the right to own property. He draws on Article 18 which guarantees people's right to own property and argues “we do not all own property. By the argument advanced in relation to the right to vote, a special legislation should be enacted to ENSURE that we all own property” [Emphasis is mine]. In other words, to K.B. Asante, since not every Ghanaian owns property despite the Constitutional right to own property, therefore the Constitutional right of Ghanaians to register and vote does not mean that ALL Ghanaians should be allowed to register and vote. In my whole life, I have not heard so much of a frivolous argument as this! Constitutional guarantees are made to protect the weak and vulnerable from the powerful and strong. It is to protect the individual citizen against powerful interests - such as from the government and other influential groups or institutions. Constitutional Rights do not force citizens to exercise such rights. People are not thrown to jail because they refused or chose not to exercise their right to free speech. Neither can anyone be prosecuted for not owning property. Nor can a person be arrested for not exercising their freedom of association.

Again hear K.B. Asante as he rambles on: “Article 42 of the Constitution is also invoked because it empowers every citizen of 18 years and above to register as a voter and vote in elections…It is argued that this right is not restricted to citizens resident in the country because the reference is to a CITIZEN without qualification. This sixth form logic can be countered by an 'O' Level question: “Are we going to make special arrangements for sick persons in Ghana to vote because the constitution does not empower only healthy citizens to vote?” Heck, YEAH!!! “Sick persons in Ghana” should have special arrangements to help them exercise their constitutional right! What is K.B. Asante saying? That if he himself falls sick (God forbid) and is admitted to Korle Bu his Constitutional Right to register and vote should end? If the sick or infirm in our society, who are able and willing to exercise their right to vote, are not being helped to express that right, then it shows that we still have a long way to go...and that there are many frontiers for us to cover as we try to entrench and expand our democratic experience. But that should not stop us from doing what is right and just – though we move at a toddler's pace. “I am for those means which will give the greatest good to the greatest number” – Abraham Lincoln.

To K.B.'s question: “Are we going to mount polling booths at hospital beds and the bedsides of sick persons at home?” I say YES, K.B. If the Electoral Commission is not doing it as of yet, it is liable to been sued for impeding the constitutional right of citizens. Just because a person is in the hospital does not make him or her non-Ghanaian, and just because I crossed the Ghanaian border one minute ago into, say Togo or Burkina Faso, does not end my citizenship of Ghana, along with the Constitutional Rights I enjoy. And what is the difference between the Electoral Commission having a polling booth in my neighborhood and the same Commission having a booth within the reach of the sick or infirm? Isn't the Commission by having a booth close to me in my neighborhood an effort by it to help me exercise my franchise? If the Electoral Commission had no business bringing booths closer to us, then the entire country would be queuing up at their Accra Head-Office from the capital to the Northern-most part of the country during election time! I'm sure K.B. Asante will be displeased if he had to go through such a thing in order to cast his vote. His aged body might not be able to tolerate such torture just as a sick person at the hospital might not be able to tolerate the torture of having to walk from his hospital bed to a relatively far voting booth. Yet he argues that citizens have the responsibility for doing what can be done to make such rights accessible!

To K.B. Ghanaians abroad already influence policies in the country. So he sees no use of them been allowed to exercise their Right to register and vote. But the question to him is, 'if Ghanaians abroad already influence policies in the country, then why does he have a problem with them voting?' 'What does he stand to lose from his fellow Ghanaians exercising their franchise? The truth is that, K.B. is happy to enjoy the inflows that Ghanaians abroad send into the country, he's happy to benefit direct or indirectly from the many donations they make to our hospitals, schools, law-enforcement agencies, etc. This is what he calls “influence on policies”. When he and his likes TAKE from Ghanaians abroad, that is “INFLUENCE”. But when Ghanaians abroad want to claim their Right to vote, he has an issue with it. Interesting indeed! Very sound argument coming from a veteran politician, diplomat, and indeed an octogenarian (as he likes to call himself)!

Finally, he ends his article by expressing his “greatest concern” about Ghanaian citizens abroad exercising their franchise because “IT WOULD open avenues for dissension, recriminations and corruption. Ambassadors, High Commissioners and the like would be appointed registration and other election officers. Many of them are political appointees.” How he arrived at this prophecy of doom, I cannot fathom. He did not even express the possibility of those events but he states emphatically that IT WOULD literally happen. What we have to understand is majority of Ghanaians abroad live in countries that have practiced democracy for centuries, hence they've learnt from the 'best' (so to speak), so their civility to conduct free and fair elections should be the least worry of someone who has been living under democracy for just 12 years. Rather our worries should lie in Ghana where even in this Millennium people still think that they can use Macho men to bully people into submission and influence their vote. His argument as to the minority party alleging that it will be fraudulent does not 'hold any water'. Should a person's democratic Right be denied just because a second party or another person is paranoid? Is that how we should build tomorrow's Ghana? Based on paranoia? Let K.B. Asante be informed that almost every city outside Ghana with a sizable Ghanaian population has representations of the various political parties there. So wherein lies the fears and paranoia? As to the argument about the High Commissioners, etc being political appointees, that is a secondary matter. The very Electoral Commission is made up of political appointees, isn't it? Dr. Kwadwo Afari-Djan, wasn't it Jerry Rawlings who appointed him along with almost all the Electoral Commission members? And haven't they been organizing “free and fair” elections? Ato Kwamena ([email protected]) is a Social Commentator who contributes feature articles to Ghanaweb.com. His opinions can be found under Ato Kwamena AND Kwamena, Ato in the Ghanaweb list of Columnists. Views expressed by the author(s) do not necessarily reflect those of GhanaHomePage.