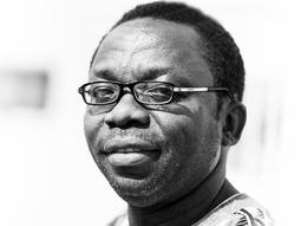 Human Augmentation projects the capacitation of human beings beyond their natural abilities and limitations. It is a basic aspiration of human beings, and has been going on since the emergence of humans. Human enhancement is both physical and cognitive and promises to cure and overcome diseases and disabilities that encumber and debilitate human existence. Interestingly, human augmentation is one of the themes of this year's University of Cape and Geneva Science Diplomacy Accelerator (GESDA ) Youth Anticipation Initiative. This initiative aims to use the science of the future to shape the present. More importantly, it tries to mainstream African youth participation, making sure that the voice of African youths is heard in this important conversation. The Youth Anticipation Initiative is a thoughtful and commendable program given the fact that the future belongs to the youths.

To situate the link between human augmentation and African youths, I would like to recount a recent incident.

It happened in my community in southern Nigeria. On Monday, July 11, 2022, I got a call that people in my village woke up early in the morning to discover that someone had poured some white sand across the major footpaths. It was a strange sight that evoked fear and panic among the population. Community leaders quickly summoned an emergency meeting to unravel what happened. Their inquiry traced the incident to a young man in his late 30s who was visiting. This gentleman lives in a city about 110 kilometers from his hometown. He works as a school teacher and also a part time pastor at a popular Pentecostal church in Port Harcourt.

According to family sources, some weeks ago the mother informed him that the aging father, over 80 years, was ill. Some years ago, two of his brothers took ill and died under what some within the family deemed "mysterious circumstances". Before traveling to see the father, this young man went and consulted, not a medical doctor, but a senior pastor in his church. The pastor told him to go and conduct a liberation prayer with some white sand and olive oil so that his aging and ailing father would recover. The ritual would supposedly neutralize any other malicious forces linked to the father's sickness and other misfortunes in the family and community. On Sunday night while the villagers were asleep, he went and poured some white sand and olive oil across the footpaths in the community as part of this prayer of liberation, and obviously, efforts to get his father healed.

The community leaders were angry and sanctioned him for conducting this ritual without their consent and permission. They asked him to pay some penalty, to give the community some kola nuts, a goat, a jar of palm wine, and five thousand naira to appease the gods of the land. But the young man objected to paying the penalty, and later went back to the city. This young man indulged in this ritual exercise to increase the father's and by extension other community members' health and lifespan. It was an exercise to tackle existential challenges. While this incident is not representative of what all Nigerian or African youths do or would do when confronted with illness and aging, it is indicative of a potent and pervasive mindset in the region. In the absence of technoscientific goods, African people deploy mythical formations and rituals in their efforts to cure diseases, defy death, and augment life. They resort to using traditional, christian and Islamic charms and accessories. Unfortunately, the mythical habit hampers the ability of Africans to use the science of the future to build the present, and increase health and lifespan. It stymies the possibilities of human augmentation and the potential of Africans to leverage other new science and technology advances. But the situation is much more complicated.

Existing techno-politics has orchestrated a gap between Africa and the rest of the world. This gap has made technologies inaccessible and unaffordable for many people. If urgent measures are not taken to rectify the technological disconnect of Africa from the rest of the world, the gap would persist in the anticipated augmented future. If Africa does not witness some radical shifts in policy, orientation, and mindset associated injustices and inequities would even worsen. Although human augmentation and other emerging technological schemes point to much better, healthier and happier futures, risks and dangers abound.

While Africans must be optimistic about the prospects of human augmentation and other emerging technological programs, there is a need to exercise caution, and temper optimism with realism. The technological differential has created a situation whereby these goods and benefits have largely been elusive, unharnessed, and underutilized. African countries have become a dumping ground of outdated and sometimes harmful technologies. Africans have been unable to access or optimally deployed existing technologies to tackle their everyday needs and challenges. Many Africans travel to Europe, America, India and the Middle east to access medical care at exorbitant costs. And this trend is not changing for now. If these gaps are not narrowed or closed, Africa could be left further behind in the race for human augmentation and other futurist schemes.

In addition, existing technologies have yielded a situation where African countries are described as developing, less developed, or underdeveloped. If the gap is not rectified, augmentation could become an identity political issue. Augmentation could become a way of defining and identifying humans. Africa might end up being designated as a continent of unaugmented, under-augmented, or less augmented humans as opposed to augmented humans in the west and the rest of the world.

Human augmentation is a welcome development. Highlighting the risks and dangers associated with human augmentation should not be misinterpreted. It should not be seen as an exercise in despair, or an attempt to stop or oppose the process of human capacitation. Rather, noting these concerns is a way to ensure that necessary measures are taken to mitigate envisaged risks; that promises and possibilities of this exciting project are harnessed as anticipated for Africa and the rest of the world.

Leo Igwe is the author of a paper titled ‘Transhumanism and Emerging Technologies: Exploring Ethics and Human Enhancement in Africa’