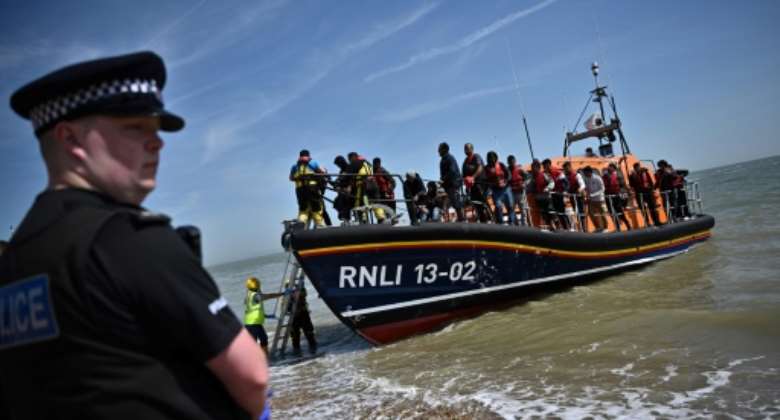 British MPs said there was 'no clear evidence' the government's plan to deport some asylum seekers to Rwanda would discourage Channel crossings. By Ben Stansall (AFP)

British MPs on Monday told the government there was "no clear evidence" that its controversial policy to deport some asylum seekers to Rwanda would stop Channel crossings in small boats.

The House of Commons Home Affairs Committee said "much more clarity" was needed on the plan, including how much it will cost.

Instead, the MPs urged ministers to look at less eye-catching solutions to the issue, including closer cooperation with European neighbours.

"There is no clear evidence that the policy will deter migrant crossings," the cross-party committee said in a report on the "small boats" phenomenon.

In fact, it pointed out, numbers attempting the journey from northern France in inflatable dinghies and other unsuitable craft had increased since the policy was first announced in April.

It attributed this to "scaremongering" by people-smuggling gangs warning migrants about the change in the law.

The Channel crossings have put Prime Minister Boris Johnson and his government under political pressure, given that they promised to tighten Britain's borders after leaving the European Union.

Most claim asylum but the government says the costs involved in the application process -- more than £1.5 billion ($1.8 billion) -- are unsustainably high.

The first flight carrying asylum seekers was due to take off for Rwanda in mid-June but was grounded due to legal challenges.

The Home Affairs Committee said there was "no magical solution" to deal with irregular migration.

But it said "close cooperation with international partners, particularly those in France" stood more chance of success in deterring Channel crossings.

That included intelligence-sharing to smash criminal gangs behind the practice, and rebuilding connections destroyed by Brexit to enable Britain to send illegal arrivals back across the Channel.

But it said the current asylum caseload of more than 125,000 was a result of "antiquated IT systems, high staff turnover and too few staff".