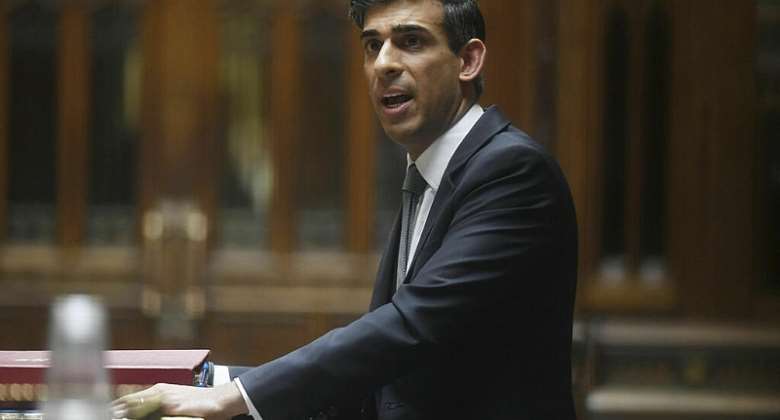 Former finance minister Rishi Sunak led the field of Conservative MPs bidding to become Britain's next prime minister in the first ballot of Tory lawmakers Wednesday, as the race narrowed to six following the elimination of two candidates.

Foreign Secretary Liz Truss finished third, winning the support of 50 of the 357 Conservative lawmakers who voted.

The remaining candidates to meet Wednesday's minimum 30-vote threshold were former equalities minister Kemi Badenoch on 40, backbencher Tom Tugendhat on 37, and Attorney General Suella Braverman, who scraped through with 32 votes.

Former foreign secretary Jeremy Hunt, who finished runner-up to Johnson in the last contest in 2019, and newly appointed finance minister Nadhim Zahawi were eliminated after failing to meet the target.

There will be no let-up to the contest, with another round of voting set for Thursday, as the ruling party tries to winnow the candidates list down to a pair over the next week.

Several television debates between the remaining candidates loom, with the first Friday night, ahead of weeks of nationwide hustings during the final run-off race.

The eventual winner is set to be announced on 5 September, as the party seeks to rebuild its support following near non-stop scandal under Johnson ahead of the next general election due by 2024.

But the battle has already been marked by infighting between the candidates, prompting the beaten Hunt to warn the remaining rivals that "smears (and) attacks may bring short-term tactical gain but always backfire long term".

Johnson was last week forced to announce his departure after a wave of ministerial resignations.

It was a stunning fall from grace for a politician who secured a landslide election win in December 2019 and took the UK out of the European Union a month later, before the Covid pandemic struck.

Following a weekend of frenzied jockeying among those eager to replace him, eight candidates survived an initial cull Tuesday, with Sunak again topping the list.

While Johnson has said he will not endorse a successor, his remaining loyalists have not held back in rubbishing Sunak, and have been coalescing behind Truss.

Earlier Wednesday, Johnson hinted the race could be curtailed to days rather than weeks as he praised the "wonderful candidates".

"I will be leaving soon with my head held high," Johnson said at his penultimate session of Prime Minister's Questions in parliament.

Johnson then suggested the new leader could be elected "by acclamation" before next week, if the last two candidates agree a deal between them.

Leading contenders have already ruled that out, and Johnson's press secretary told reporters that he was merely noting "uncertainty" about the race.

She added that the government was filing a House of Commons vote of confidence in itself, with a debate set for Monday, after rejecting an opposition Labour motion that was designed to evict Johnson sooner.

Labour leader Keir Starmer said Johnson was "totally deluded to the bitter end" but could take comfort in no longer having to follow the rules set for everyone else - a biting reference to "Partygate" and other scandals.

In a sign of things to come, Starmer also set his sights on the Tory leadership contenders, including the complicated tax affairs of wealthy Sunak.

Tax has been the defining issue so far.
Sunak has been stressing the need to balance the books, in contrast to a free-for-all series of tax cuts promised by rivals. That rival approach has drawn concern from the Bank of England and independent economists.

Giving her first campaign speech Wednesday, Mordaunt built on the patriotic themes that suffused her launch video - which had to be taken down after complaints from individuals who featured in it without permission.

The Royal Navy reservist said she was inspired to a life of service in 1982, aged nine, when she watched a taskforce of warships leaving her home city of Portsmouth to retake the Falkland Islands from Argentina.

"I think our party has lost its sense of self," Mordaunt said, likening the Conservatives to Beatles legend Paul McCartney's set last month at the Glastonbury music festival.

"We indulged all those new tunes, but what we really wanted was the good old stuff that we all knew the words to: low tax, small state, personal responsibility," she added.