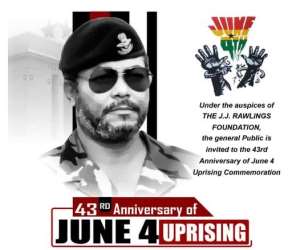 June 4th has never been about making all poor to become rich and everyone equal. It has never proclaimed as its goal the banishment of poverty from the land. What it has done is to underscore the need for fairness, equity and the creation of opportunities such that all who truly aspire and apply themselves diligently and make a genuine endeavor can rise progressively out of the doldrums and show that individual and societal progress can be achieved by all classes of people regardless of birth, creed, ethnicity, social status or so-called "privileged education" .

The uprising has to be memorized because the revolution fought corruption, greed, nepotism and much other canker at that time and it's still relevant today. Celebrating June 4 should be a time of reflection on the issues that brought about the revolution.

The June 4th Revolution or June 4th Uprising was a popular uprising in Ghana in 1979 that arose out of a combination of corruption, bad governance, lack of discipline and frustrations among the general public. It was sparked when the then military government of the Supreme Military Council (SMC II) of General F K. Akuffo put flight Lieutenant Jerry John Rawlings on public trial for attempting to overthrow the government on May 15th 1979.

In Ibrahim Hardi's piece, A military trial was set up and Jerry John Rawlings turned the trial against the government by accusing it of massive corruption and requesting that his fellow accused be set free as he was solely responsible for the mutiny. Jerry John Rawlings words 'Leave my men alone- I'm responsible' were immortals words that will continue to be the standard of true leadership in our country.

Those words remind us of the master's teaching that 'to save one's life we must be prepared to lose it'. Selflessness and sacrifice was brought to the fore. What a leader! His diatribe resonated with the entire nation as there was massive suffering. Inspired by Jerry John Rawlings for showing bravery even at the point of death, young officers and other officers forcibly released him and his men on the morning of June 4th 1979.

In the night of June 3rd 1979, junior military officers broke into the jail where Jerry John Rawlings was being held and freed him, and ostensibly matched him to the national Radio station to make an announcement. The first public heard from Jerry Rawlings was now legendary statement that he Jerry Rawlings had been released by the junior officers and that he was under their command. He requested all soldiers to meet with them at the Nicholson stadium in Burma Camp in Accra.

The entire nation went up in uproar. To some of us loyal to Jerry Rawlings, June 4 uprising was the most significant event on the nation's political calendar apart from the achievement of Ghana's independence.

The AFRC carried out a house-cleaning exercise in the armed forces and society at large, while restoring a sense of moral responsibility and the principle of accountability and probity in public life. The AFRC was in office for only three months and, in pursuance of a programme already set in motion before the uprising, allowed general elections to be held.

To some of us who believe in the revolutions led by Flt Jerry John Rawlings, June 4th is about values and principles; It is a reminder that principles must be the core platform on which we build a Great and Strong nation- the cause of right- the cause of justice, the cause of fairness and the cause of brotherhood. The June 4th celebration until 2004 was a public holiday but was revoked by the previous NPP government led by former President John Agyekum Kufour who argued the celebration of the June 4th was touching the sensitivity of some group of Ghanaians whose families fall as victims to the June 4th uprising. So what locus does npp have now to talk about corruption? As Jerry Rawlings kept saying; the past npp regime set in motion the moral and economic crisis Ghanaians are experiencing today.

However, the June 4th uprising seems not to have served its intended purpose because characters like Nana Addo Danquah have legalize corruption by revoking the June 4th reminder in the history of this country. And considering the allege corruption level in the country which continuous to deny the ordinary Ghanaian of a better education, employment, good clean drinking water, electricity, good roads, rule of law, social justice and equality among other amenities should be blame on the npp for legalizing corruption.

"The house of my father not a den of thieves but a sanctuary of Sacred and Holy Communion with God." Similarly, the seat of governmental power is not a place for thieves, liars, greedy and selfish people but a place where honesty, simplicity, nobility, sacrifice, truth and justice must be enthroned and glorified.

Our leaders should use events of June 4th to rebuild the confidence reposed in them, fight corruption and create more jobs for the youth.

We have a lots of work to be able to change this country.