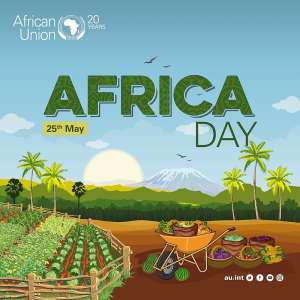 Every year May 25, the world celebrates Africa Day. On May 25 1963, 30 independent African leaders signed the founding charter of the OAU (Organization of African Unity). In 2002, to give more impetus to the organization, many new areas were added and it was transformed into African Union (AU). From that perspective, this year is special as we commemorate the 20th anniversary of AU. On the other hand, the celebration will be tarnished by rising food prices as a result of Covid-19, climatic induced drought in parts of Africa and the Ukraine crisis. Notwithstanding, Africans and African diaspora across the world will commemorate the day as it represents their collective struggle against colonialism, racism, development and economic progress. The day truly serves to integrate the diverse continent into one identity and can truly be termed as African Unity Day.

In 1963, Ghana's first president, Kwame Nkrumah, declared, "AFRICA must unify," criticising that most African countries trade raw commodities to their former colonial powers rather than trade among themselves. He envisions more intra-African trade, harmonised systems, and removed borders. His pan-African ambition was never realised. True to his dream, in March 2018, African leaders agreed to establish an Africa Continental Free Trade Area (AfCFTA). Covering more than 2 billion African population, majorly youth, it aims to create around 15 billion GDP for each country and an overall 3 trillion US$ for the continent in the immediate future.

Each year African Union decides a theme for the day based on the common challenges for the continent. The theme, for this year, is “Strengthening Resilience in Nutrition and Food Security on the African Continent”. The theme underpins the importance of food and nutrition security across the continent and promotes nature-based solutions to climate, health issues, food and water security, and sustainable livelihoods.

Parallel to Africa day, the Union has also convened an extraordinary summit in Malabo, Equatorial Guinea on May 25-28 in order to discuss on terrorism and unconstitutional changes of Government. As the extraordinary summit contemplates the progress towards its various objectives and analyse the challenges and resolve them, it would be interesting to re-evaluate the progress of Africa so far, vis-à-vis the fixed goals and highlight the good, bad and ugly.

At the outset, it must be acknowledged that, despite their reputation for having fragile state health systems, the continent was able to resist the spread of coronavirus through an effective strategy. When the very first patient of Covid19 was detected in Egypt on 14 February, it created a lot of doubt and anxiety regarding the possibility of the newly found virus possibly resulting in massive deaths and destroying the already frail health systems. However, despite intermittent outbreaks, which also occurred in other candidates, the virus remained the least fatal in Africa. The credit for preventing its spread must go to the policymakers who took several aggressive measures. Countries like Lesotho declared an emergency and went into lockdown even before there was a single case of covid19. While the pandemic is still not over, the countries are refocusing their efforts. Instead of frantically pursuing the elusive vaccines, they are focusing on longer-term testing and surveillance methods that will gradually enhance the continent's health systems.

Despite claims of democratic decline, Africa is seeing an increase in the number of elections held. Afrobarometer conducted a poll that found that the majority of Africans prefer to live in democracies. Multiple countries successfully had elections in 2021, and their governments were democratically altered. When opposition leader Hakainde Hichilema upset incumbent Edgar Lungu in a hard-fought presidential election in Southern Africa, the country made history in the continent's democratic history. Morocco's long-ruling Islamists were defeated by liberal parties in a resounding defeat in North Africa, illustrating the dwindling appeal of political Islam and the shrinking space that Islamists now find for themselves in Morocco and elsewhere. In both Sao-Tome and Principe and Cape Verde, two island nations, opposition candidates defeated the incumbents.

In West Africa, Gambian voters re-elected the incumbent President Adama Barrow. Niger, another West African country, witnessed its first transfer of power through election. In Ethiopia, despite the ongoing conflict between the Tigray People’s Liberation Front (TPLF) and Prime Minister Abiy Ahmed, the election took place in June as scheduled and Abiy Ahmed won a landslide victory. Most recently, despite the resurgence of Al-Shabaab group, which continues to destabilise the country by sporadic terrorist attacks, Somalia successfully conducted its election.

The recent years witnessed a succession of coups in the continent. It started in April 2021, Idriss Deby, the President of Chad for three decades, surprisingly got killed in the battlefield, which has been termed as an “institutional coup d’état. In May, Mali witnessed its second coup in nine months led by Colonel Goita who declared himself President immediately after the coup. In fact, the last coup in August 2020 which took place in the wave of strong anti-government protests, was also led by Colonel Goita.

The same Colonel Goita was also in charge of the last coup, which took place in August 2020 amid a wave of intense anti-government rallies. Following the successful coup of 2020, the goal was to hold national elections as soon as possible under a Transitional. But now the election is postponed till 2026, which irked France, the principal security provider. Under this prevailing political instability and rumoured presence of Russian private army Wagner, France government decided to withdraw its troop from the country, which will further aggravate the security situation in Mali and greater Sahel region.

Guinea, a small West African country, experienced a military coup in September. Sudan's military General Abdel-Fattah al-Burhan staged another coup in October, arresting Prime Minister Abdalla Hamdok and a number of his Cabinet ministers from the transitional government. Meanwhile, countries like Niger, Madagascar, and Guinea-Bissau have survived coup attempts but are currently in limbo.

No one expected Ethiopia's Prime Minister Abiy Ahmed's war against the Tigrayan People's Liberation Front (TPLF) to go until the end of 2021 when he started it a year ago for their alleged involvement in an attack on a federal military post. In this expanding conflict, there have been countless twists and turns. In fact, the rebels were once only 130 kilometres from Addis Ababa, Ethiopia's capital and the African Union's headquarters. The Ethiopian government was obliged to declare a six-month state of emergency as a result of this. PM Abiy Ahmed appears to have regained momentum with the help of countries such as Turkey, the United Arab Emirates, and Iran. The emergency has been lifted and the country seems to be regaining its momentum, particularly with the launch of Great Ethiopian Renaissance Dam (GERD). However, as we have seen in the past, this conflict is far from over and might continue to linger indefinitely.

While the AfCFTA is a bold endeavour to economically integrate Africa, the continent remains politically divided. This was clear during the UNGA resolution condemning Russian aggression, which received only 31 African votes in favour. Russia's long-time African friends Sudan, Mali, and the Central African Republic were among the 17 African countries that abstained. South Africa's absence was unanticipated, given that it has persistently opposed both the Israeli occupation of Palestine and NATO's intervention in Libya. Six more African countries have decided to abstain from voting. Ethiopia, Africa's second-most populated country, and Cameroon were absent from the voting booth. The only African country to vote against the motion was Eritrea, Ethiopia's erstwhile foe turned partner.

This split house was also during the African Union's (AU) annual summit earlier this year. While there were many important issues to debate, such as military coups and measures to recover from the COVID pandemic, the entire meeting was disrupted by disagreements among the African Union's Member States over Israel's observer status. Despite the vehement opposition to Israel's membership in the union from nations such as Algeria and South Africa, Kenya and Ethiopia publicly supported it. Many other African countries, like Morocco, a signatory of the Abraham Accord, had tacit support for Israel. Although, in order to avoid an unprecedented schism in the house, the union decided to postpone the debate until next year's meeting, the debate might further aggravate the already divided house.

The cover story of Economist magazine in 2000 was titled ‘The hopeless continent,’ whereas in 2011 it changed to ‘Africa Rising.’ Africa is known for its abundant natural resources, particularly fossil fuels including oil, gas and coal. Africa now has six of the world's top ten fastest growing economies. Africa has come a long way through various plans such as OMEGA plan of President Wade of Senegal, and the Millennium Partnership for the African Recovery Programme (MAP) promoted by the Nigerian President Obasanjo, South African President Mbeki and Algerian President Bouteflika. However, it is far from an integrated nation, as envisaged by Kwame Nkrumah or Julius Nyerere, the first torchbearers of one Africa. Libyan leader Muammar Gaddafi was the last African leader who called for the establishment of a government of the United States of Africa.

On Africa Day 2022, political stability still remains a severe challenge. The post-Cold War period of civil war, internal conflicts have forced the African Commission to set the goal of silencing the gun by 2020. Ironically, since in 2020, due to the Covid crisis, Africa became more focused on internal migrations rather than its stated goal of “Silencing the Guns”.

In a world beset by global crises such as COVID-19 pandemic and climate change, the choice to emphasise the importance of malnutrition and food insecurity is both timely and critical. Strengthening resilience in the areas of nutrition and food security will go a long way in addressing a number of interconnected concerns. The continent continues to hold a lot of promise. It possesses both the people and technical resources necessary to ensure a better future for all of its citizens. It is still possible to eliminate hunger and malnutrition by 2030. More than just cultural and culinary celebrations, I It should also be about evaluating the state of the African Union, the continental institution that embodies the ideals of Pan-Africanism. As hope springs eternal, the continent is expected to strive together in its journey of “a long walk to freedom”.