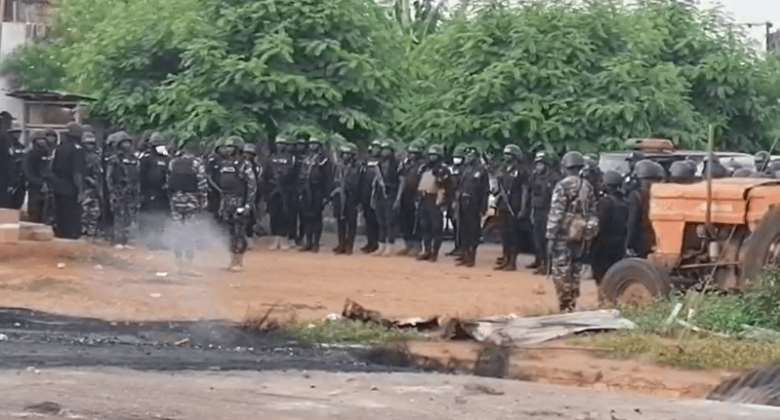 A high-powered delegation from Accra has touched down in Nkoranza in the Bono East region on Wednesday, May 18, 2022 following the disturbances in that part of the country.

The delegation is led by COP Tetteh Yehuno.

The delegation has been holding a closed door meeting with the Nkoranza Police personnel at the vandalized Nkoranza District Police station.

Sources within the police say the delegation will also visit the Omanhene of the Nkoranza Traditional Area, Nana Kwame Baffoe, at his private residence.

The Bono East Regional Minister Kwasi Adu Gjan assured that a thorough investigation will be conducted into the death of 27-year-old man Albert Donkor who was reported to have died in Police custody, leading to youth agitations in the area.

This developments comes after the Inspector General of Police (IGP) was called upon to act swiftly to address the issue.

Wa West Member of Parliament, Peter Lanchene Toobu, said in his view, the development puts a burden on the IGP to, as a matter of urgency, find a solution to Police brutalities in the country.

Speaking in an interview with Eric Mawuena Egberta on the mid day news on 3FM Tuesday May 17 in relation to the alleged Police brutalities on a 27-year-old man at Nkoranza, leading to his death, Mr Toobu who is a retired police officer said “The Police organization remains the only organization that is the lead organization in law enforcement.

“It is very clear that Police brutality is a global phenomenon. How to curb Police brutalities requires some issues that every country will specify. What happened in the US in May 2020 when George Floyd was killed by a Police officer, it was the local Police that started the investigations and issued the statement.

“When there was video circulating, the local Police quickly changed their position and they said they had gathered more information regarding this and updated themselves, at the end of the day the Federal Bureau of Investigations (FBI) took over the matter and dealt with it until the perpetrator was convicted, it was done within the system.

“If the system is working, I don't care who you are, as far as you commit a crime irrespective of the uniform you are wearing, you should be dealt with accordingly because everybody is equal under the law.

“So what happened in Nkoranza is nothing new as compared to what happened around the world. But what are we expecting? We are expecting the Police to be forth right. The most difficult thing is that, you are the IGP and something happens in Nkoranza, you were not there but your name will be added, your picture will be on the front-pages. I expect the IGP to direct the action because command and control rest with him.”

Member of Parliament for Nkoranza South, Emmanuel Kwadwo Agyekum and the youth of Nkoranza are demanding justice for Albert Donkor a native who is alleged to have been killed by the Police.

The people are calling on the President of Ghana, Ministers of State, Parliament, human right organisations and the clergy to add their voices to the clarion call to demand justice for Albert Donkor who was shot by the police leading to his untimely death.

According to the group, On the 25 April, 2022 at exactly 1:00 am midnight, the late Albert Donkor was picked up at his mother's residence at Kasadjan in the Nkoranza Municipality by the Ghana Police Service on suspicion of robbery that had occurred on the Nkoranza-Kintampo road.

“Albert Donkor was denied access to a lawyer of his choice, his family members were denied access to him, he was never tried by any competent court and today, all we are hearing is Albert is no more; how reckless can the police service be? This is indeed an epidemic of injustice. The people of Nkoranza cannot stay silent when innocent Albert Donkor has been targeted and killed” part of their press statement reads.

“What is the justification for arresting a civilian at his residence and subjecting him to torture causing his death and not that the death occurred as a result of a gun battle at the crime scene. The rambling explanation given by the police that the victim was shot by the robbers when the victim led the police to arrest other suspects at a ghetto is untenable and cannot be accepted by the people of Nkoranza South as same excuse was given in the bullion van robbery case at Ashaiman”

“This is indeed glaring and an unfortunate display of incompetent strategic leadership within the police service. In fact, with this culture of policing there is no question that Ghana is living a nightmare with no end in sight. The police service should let the people of Nkoranza know the competent court that sanctioned the killing of Albert Donkor” the statement demands.