By Alison Hird with RFI
Ethiopia 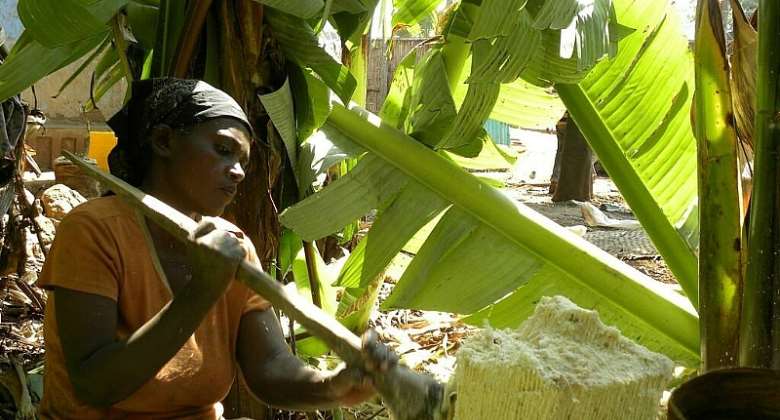 The enset plant – commonly known as the false banana – feeds some 20 million people in the highlands of Ethiopia. But its potential is far greater. Resistant to drought and able to grow all year round, scientists believe enset could be the superfood the continent needs to face climate change and diversify our dependence on wheat, rice and maize.

The enset plant (Ensete ventricosum) grows mainly in the highlands of South-West Ethiopia.

It's a close relative of the banana. But unlike its cousin the fruit is inedible.

What locals have been harvesting and eating for centuries comes from the tree's corm (root) and the inside of its trunk.

They extract the starchy pulp and use it to make porridge and bread.

In the village of Dorze, women have the arduous task of extracting the pulp from the stalk and roots. Every part of the enset plant, other than the fruit, is used.

"The pulp is cooked and the leaves are fed to animals," says 50-year-old Dekenech Chalaro. "Then the fibres are used to make twine and to hang rooves. We also extract a juice called bulla, which is given to pregnant women," she told RFI's Noé Hochet-Bodin.

In the mountainous region around Dorze, some 4,000kms southwest of the capital Addis, everyone has enset trees in their garden or backyard. The plants can grow up to 10m tall and 60 of them can feed a family of five for a year.

"The enset is much easier to grow than other crops," he told RFI. "You just dig a hole and plant an enset root. Then it spreads and grows by itself. Once harvested, I can get about 50 euros from it – whether I sell it as bread, bulla or whatever."

Recent research has revealed some of enset's extraordinary properties as a crop for modern times.

In addition to being an important source of starch, fibre, medicine and animal fodder, along with its uses in roofing and packaging, the plant has good resistance to drought, is perennial, and can be harvested at any time of year.

What's more, while the plant is cultivated only in the southwest region of Ethiopia, researchers found it grows wild in river valleys and gorges all the way down to South Africa.

Those wild relatives are not considered edible, but the fact they grow so far south suggests the plant can tolerate a much wider range of terrain and climate.

A number of scientists are working to see how it could be produced more widely across the continent, particularly in neighbouring countries like Rwanda, Tanzania, Uganda and Kenya.

Professor Addisu Fekadu of Arba Minch University has embarked on modernising the centuries-old cultivation techniques, and notably the process of fermentation.

"We have introduced a new type of modern processing tools and modern fermentation technologies to improve yields," he told RFI. "If we give more attention to the enset plant I think it can have the potential to feed 100 million people globally within the next 40 years."

Addisu has created a very versatile flour from enset and is convinced the plant has huge potential to boost food security on a continent where 21 percent of the population is undernourished, according to the UN's World Food Programme.

Enset has been dubbed "the tree against hunger" because it keeps on growing until you harvest it.

"It is climate-resilient and you can't find such a high yield in any other crop than the enset plant," Addisu said, insisting we must look for "new solutions to global hunger".

The impact of the war in Ukraine in reducing exports of cereals has also highlighted the importance of diversifying the world's staple crops of wheat, rice and maize.

If more research is financed, enset could add to the mix and provide a more stable supercrop.