Ghana Would Be Another Liberia - A rejoinder 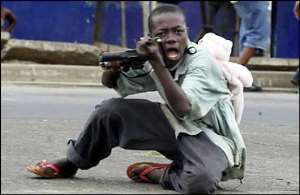 It is incredibly amazing and very disturbing when people make threat of war and conflict all in the name of politics. It becomes more worrying when such unguided statements come from high ranking political figures. It is based on the above premise that the statement made by Dr. Josiah Aryeh, the General Secretary of the opposition National Democratic Congress (NDC), on Ghanaweb on 6th July 2004, was grossly unfortunate and should be condemned by all peace-loving Ghanaians. According to Dr. Aryee, Ghana would be another Liberia if the ruling NPP government does not stop manipulating the electoral process leading to the general elections in December.

Nobody questions his grave concern about the electoral process being made genuine and more transparent. It is our collective and civic responsibility to make sure that the Electoral Commission conducts the election in a manner that has the potency to achieve satisfactory results and approval.

Any process can never be perfect and as we continue to mature in the electoral process, some of the inherent problems of the commission will be overcome. The conduct of 1992 general election had its own problems but were not repeated in 1996, and 2000 election was better than the previous years. Even elections in the USA, which has practised democracy for more than a century, has problem in their electoral system and the US presidential election in 2000 was a typical example.

So the question is does Dr. Aryee know the consequences of singing songs of war? Does he think Ghanaians want this country to plunge into war and become another Liberia? Citing Liberia, Ivory Coast and Sierra Leone as examples of war and conflict spots to buttress his concern for fair electoral system is outrageous and quite unfortunate. Ghanaians are peace-loving people who abhor war and they will do everything to maintain the peace they are currently enjoying. No one is prepared to pay a high price of just because some group of Ghanaians want to be voted back into power. Ghanaians have enough patience and if this country did not become like Liberia and other trouble spots in the 1980s and 1990s then never even think about it because any attempt to let Ghanaians become refugees would be fiercely resisted by the very people he claims fighting for.

If Dr. Aryee has not learned any lessons at all from what took place in the countries he cited as conflict spots, majority of Ghanaians have. There is no justification whatsoever to sound that warning. Recent statements from the main opposition NDC tend to confirm the statement made by Dan Botwe, NPP General Secretary on ghanaweb on 5th July 2004 that “We're not violent like the NDC. NDC is violent. The party was conceived and born in violence. They were breast-fed on violence. I'm praying to see when they would be weaned from violence” Wars and conflicts could be cited as one of the causes of underdevelopment and impoverishment on the African continent and if NDC wants this country to become a war zone, then I have a big problem with them because violence has never solved any problem in the world but negotiation and dialogue. For example when the late Dr. Kofi Abrefa Busia, the Prime Minister of the Second Republic stated that it will only take dialogue to end apartheid in South Africa, many people did not accept his position but eventually it was neither war nor violence but dialogue that won the freedom for South African black people. Gone are the days when the ordinary Ghanaian was taken for granted. As the country matures politically, its citizens are able to discern self-seeking individual or group of people who just want to take this nation for a ride by coming out with all sort of statements including trumpeting and issuing threat of chaos and conflicts. I truly believe that Ghana as a nation has passed that stage and has set an agenda of deepening democracy for the present and posterity so that our status as the black star of Africa becomes more meaningful.

Dr. Aryee should remember that Ghana is bigger than the party he leads and if his party wants violence, majority of Ghanaians dislike it and least he talks about it the better for us, because preparing the minds of the people to fight, cause trouble and cut their brother's throat so that your party comes to power again is a failed effort and will backfire.

If his party is preparing any secret agenda to cause mayhem under the pretext of winning the sympathy of the ordinary voter, then I am very afraid that such a move will not succeed because his party's history will continue and forever haunt them.

Also, let Dr. Aryee be reminded that the security services are now so professional that they will do everything within their power to protect the very people the constitution enjoins them to protect

If the electoral commission has been successful in organising three successive Presidential and Parliamentary elections in this country in 1992, 1996 and 2000 under his party, then they will be able to do the same under another government. If is it a mere propaganda and rhetoric of parties in opposition to always doubt the credibility of the electoral commission, then Dr. Aryee statement should be treated with all the contempt it deserves. This is the same commission that worked under his party's administration. What has changed overnight that tends to make the commission not credible?

If his party truly believes in the rule of law then it can go to court so that the court can force the commission to do things they are not doing well. Giving threats of War is uncharacteristic of a typical Ghanaian.

In conclusion, let me say that Ghana will continue to be peaceful because the people want to live in peace and the credibility of the electoral commission is still high. The commission I know will rise to the occasion as it has been doing in all previous election. Any political party, which uses threats of chaos, conflict and wars, does not deserve the mandate of peace-loving Ghanaians. Let us learn to use our mouths to bless this nation rather than to curse it. Parochialism and sensationalism have no place in our modern day Ghana and Ghanaians will emerge victors after having gone through yet another successful general election.

May God calm and wipe away all devilish intentions so that our journey to economic prosperity will not be short cut. Let God bless our dear nation Thomas Kwaku Obeng Sweden Views expressed by the author(s) do not necessarily reflect those of GhanaHomePage. e-mail: